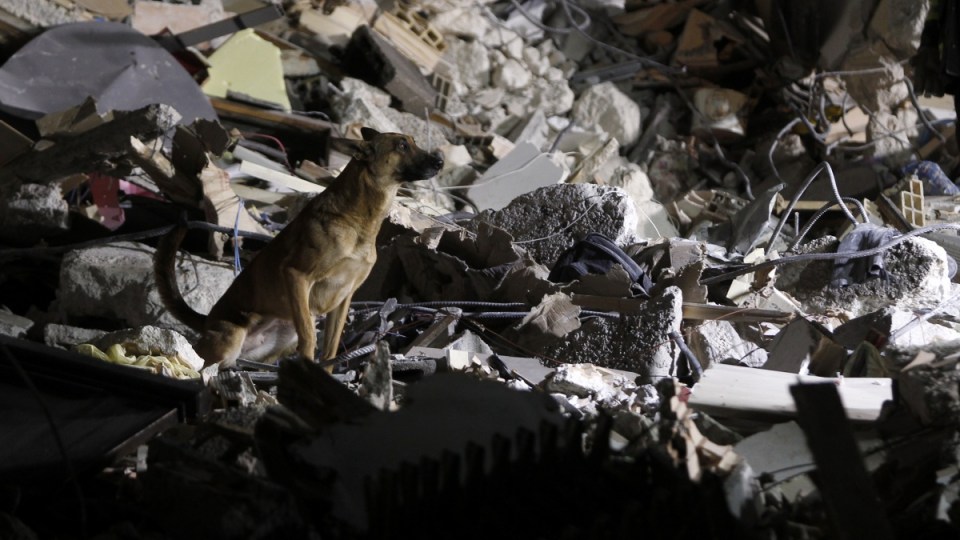 An earthquake rescue dog works among the rubble of a decimated Italian town. Photo: Getty

As Italy reels from the devastating earthquake that has killed 281 people, the world is being inspired by the heroic rescue dogs working amidst the treacherous rubble.

On Wednesday (AEST) a “dreadful” 6.2 magnitude earthquake ravaged the central Italian town of Amatrice, levelling half the town.

The nearby towns of Accumoli and Pescara del Tronto – about 100km north-east of Rome – were also devastated. 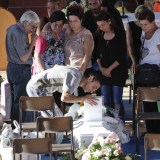 Aftershocks on Italy’s day of mourning 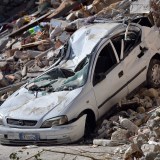 And as most rescue operations were being called off, given it is more than three days since the disaster, human and canine recovery heroes still scaled the rubble for precious belongings and signs of felled loved ones.

But it was the effort of one recovery dog, Leo, that provided the most mesmerising story.

Leo, it has emerged, helped locate eight-year-old-girl Georgia. She was found alive, buried under the rubble of her home in Pescara del Tronto, 16 hours after the earthquake struck.

“This is Leo, the four-and-a-half-year-old labrador from the search and rescue team of Pescara who found little Georgia yesterday,” Matteo said.

“Yesterday we were given the information that under a two-story collapsed house in Pescara del Tronto there were two missing girls. Immediately we went to the location and Leo, in less than 40 seconds, gave us a strong signal. With our colleagues from the Reparto Mobile Senigallia and the firemen, we dug with our bare hands for nine hours, and at the end we were able to find the girl.”

Rescuers found the girl, named Giulia, by spotting her pyjamas after digging in a spot that Sarotti sniffed out.

Watch her being taken away from the rubble below:

Search turns to recovery, not rescue

Officials leading the search efforts were sceptical of anyone in the rubble being alive more than three days after the disaster.

But this didn’t mean rescue dogs stopped their brave efforts. Reporters from around the world have descended on the ravaged region to broadcast the inspiration scenes.

And canine help is always close to the human rescuers.

So many dogs working hard in #Amatrice. Finding more bodies than survivors though. #cbc #earthquake pic.twitter.com/uW1vyg5Tei

The ABC’s London bureau chief Lisa Millar was one of the journalists to travel to Amatrice. Her account was harrowing.

“A dozen workers were on top of the rubble of a house in the Piazza in Amatrice when one climbed down carefully cradling a jewellery box,” Millar wrote.

“He looked across at the crowd who had been watching this search and walked towards a young woman before handing over the treasure.

“She opened it and sobbed as she pulled out a necklace. Her partner held her tight.

“Two dozen people — media, locals, rescuers on a break — stood watching her pain and grief in absolute silence. There was a not a sound until the bulldozers started again.”

These rescue dogs are the incredible heroes of the Italy earthquake