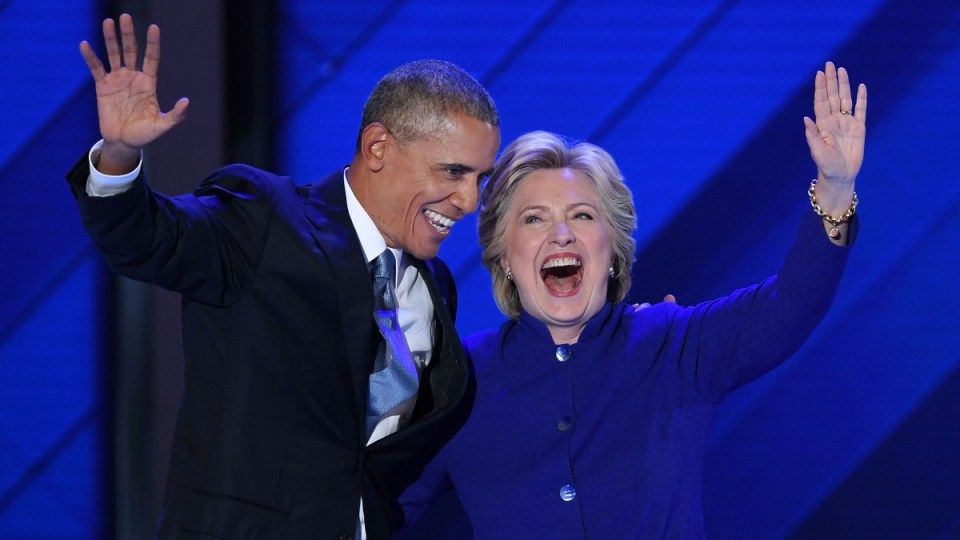 His own legacy on the line, President Barack Obama has implored Americans to elect Hillary Clinton to the White House, casting her as a candidate who believes in the optimism that drives the nation’s democracy and warning against the “deeply pessimistic vision” of Republican Donald Trump.

“And I promise you, our strength, our greatness, does not depend on Donald Trump.”

For Democrats, the night was steeped in symbolism, the passing of the baton from a barrier-breaking president to a candidate trying to make history herself.

It culminated with Clinton making a surprise appearance on stage to greet Obama with a long embrace, an almost unimaginable image eight years ago when they battled for the Democratic nomination.

He robustly vouched for Clinton’s readiness to finish the job he started, saying “no matter how daunting the odds, no matter how much people try to knock her down, she never, ever quits”.

Earlier on Wednesday, Clinton’s running mate, Virginia senator Tim Kaine, introduced himself to the nation as a formidable foil to Trump in his own right. With folksy charm, he ridiculed Trump’s list of promises and imitated one of the GOP candidate’s favourite phrases.

“Believe me!” he said mockingly, as the audience boomed back, “No!”

Obama’s vigorous support for Clinton is driven in part by deep concern that Trump might win in November and unravel his two terms in office.

He warned repeatedly on Wednesday that the billionaire businessman is unprepared for the challenges that would await him in the Oval Office.

Trump fuelled more controversy on Wednesday when he encouraged Russia to meddle in the presidential campaign.

On the heels of reports that Russia may have hacked Democratic Party emails, Trump said, “Russia, if you’re listening,” it would be desirable to see Moscow find and publish the thousands of emails Clinton says she deleted during her years as secretary of state.

The convention’s third night was also a time for Democrats to celebrate Obama’s legacy. Vice President Joe Biden, who decided against running for president this year after the death of his son, called it a “bittersweet moment”.

A son of Scranton, Pennsylvania, Biden appealed directly to the working class white voters who have been drawn to Trump’s populism, warning them against falling for false promises and exploitation of Americans’ anxieties.

“This guy doesn’t have a clue about the middle class,” he declared.

Kaine also picked up the traditional attacking role of the presidential ticket’s No. 2.

He tore into Trump, mocking his pledges to build a wall along the Mexican border, asking why he has not released his tax returns and slamming his business record, including the now-defunct Trump University.

“Folks, you cannot believe one word that comes out of Donald Trump’s mouth,” Kaine said. “Our nation is too great to put it in the hands of a slick-talking, empty-promising, self-promoting, one-man wrecking crew.”

A billionaire businessman himself, Bloomberg took aim at Trump’s bankruptcies, reliance on foreign factories and other economic experience: “The richest thing about Donald Trump is his hypocrisy.”

Though Obama has six months left in office, his address on Wednesday had the feeling of a political transition. He was emotional as he thanked Americans for sustaining him through difficult stretches.

“Tonight, I ask you to do for Hillary Clinton what you did for me,” he said. “I ask you to carry her the same way you carried me.”

Obama hails Clinton as ‘most qualified nominee ever’