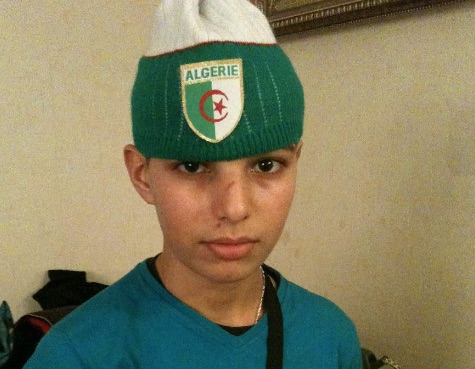 One of the young killers, Adel Kermiche, 19, in an earlier picture. Photo: Twitter

Nineteen-year-old Adel Kermiche – baby-faced and innocent in pictures released by police – was wearing an electronic surveillance bracelet when he and another attacker were shot dead by police after storming a church and slitting the throat of a priest in the town of Saint-Etienne-du-Rouvray on Tuesday.

The priest died from a slashed throat after the knifemen burst into the church as he celebrated Mass, in what appears to be the latest in a string of terror attacks in France.

The two men held members of the congregation hostage for an hour before being shot by police when they emerged on to the courtyard of the church in Normandy, according to local reports.

The priest was identified as 86-year-old Father Jacques Hamel who had served the community of Saint-Etienne-du-Rouvray for decades.

French police have arrested one person in connection with the attack, according to Reuters.

After the two men took Father Hamel, two nuns and two parishioners hostage, the alarm was raised by a third nun who escaped from the church, local media reported.

While Islamic terror is yet to be confirmed as the men’s motive, the non-government SITE Intelligence Group reported that IS had claimed the two men as its “soldiers”.

Mr Molins said Kermiche was arrested in Germany in March 2015 trying to join extremists in Syria using his brother’s ID, and then was arrested in Turkey two months later using a cousin’s ID.

Mr Molins also said the person who was injured in the attack is no longer in life-threatening condition.

The family friend says Kermiche had a sister who is a doctor in the nearby city of Rouen, and a brother.

Their mother is a professor.

The family alerted authorities to his radicalism to try to stop him from going to Syria, Sacarabany said.

Police sources also said at least one of the two hostage-takers had a beard and one wore a traditional Muslim cap.

“We have to fight this war by all means necessary,”

Mr Hollande said. “What these terrorists want to do is to divide us. For all the Catholics in France I am thinking of them.

Specialist police teams were reportedly searching the church and its grounds for explosives amid fears the area could have been left booby-trapped by the knifemen.

Pope Francis said he was horrified and shocked by the attack.

“We are particularly shocked because this horrible violence took place in a Church, in which God’s love is announced, with the barbarous killing of a priest and the involvement of the faithful,” the Pope said in a statement released by the Holy See.

As the situation developed, officers from the elite anti-terrorist Raid squad were called in to assist local police.

A number of shots were heard over a period of about 15 seconds as the incident came to an end.

Anti-terrorist authorities in Paris have opened an inquiry into the hostage-taking.

Eulalie Garcia, who works in a beauty parlour, is on the same road as the church, and told reporters that she knew the priest, who had taught her the catechism as a young girl.

“My family has lived here for 35 years and we have always known him,” she said.

“He was someone who was treasured by the community. He was very discreet and didn’t like to draw attention to himself.”

She said she was very shocked by the death of the priest, who lived opposite his church.

The face of evil: baby-faced teen who took priest’s life