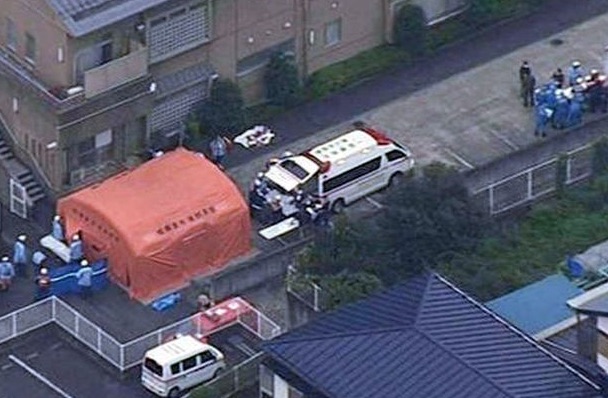 The scene outside the centre this morning. Photo: Twitter

At least 19 people were killed as they slept and about 25 wounded in a knife attack at a facility for the handicapped in a city just outside Tokyo in the worst mass killing in generations in Japan.

Police say they responded to a call at about 2.30am (0330 AEST) on Tuesday from an employee saying something horrible was happening at the facility in the city of Sagamihara, 50km west of Tokyo.

Police said a man turned himself in at a police station about two hours later.

“This is a very heart-wrenching and shocking incident in which many innocent people became victims,” Chief Cabinet Secretary Yoshihide Suga told a scheduled news conference in Tokyo.

Asahi Shimbun reported the man told police: “I want to get rid of the disabled from this world.”

He left the knife in his car when he entered the station. He has been arrested on suspicion of attempted murder and trespassing.

Officials in Kanagawa prefecture, which borders Tokyo, identified the suspect as Satoshi Uematsu, and said he had worked at the facility until February.

He entered the building about 2.10am by breaking a glass window on the first floor of a residential building at the facility, Shinya Sakuma, head of prefectural health and welfare division, said at a news conference.

Kanagawa Governor Yuji Kuroiwa expressed his condolences to the victims.

The death toll could make this the worst mass killing in Japan in the post-World War II era.

A woman who lives across from the facility told Japanese broadcaster NHK that she saw police cars enter the facility around 3.30am.

“I was told by a policeman to stay inside my house, as it could be dangerous,” she said. “Then ambulances began arriving, and blood-covered people were taken away.”

Japanese broadcaster NTV reported that Uematsu was upset because he had been fired, but that could not be independently confirmed.

The facility, called the Tsukui Yamayuri-en, is home to about 150 adult residents who have mental disabilities, Japan’s Kyodo News service said.

Television footage showed a number of ambulances parked outside, with medical and other rescue workers running in and out.

Mass killings are relatively rare in Japan, which has strict gun-control laws, with the worst killing in Japan since World War II a coordinated Sarin gas attack on the Tokyo subway system in 1995.