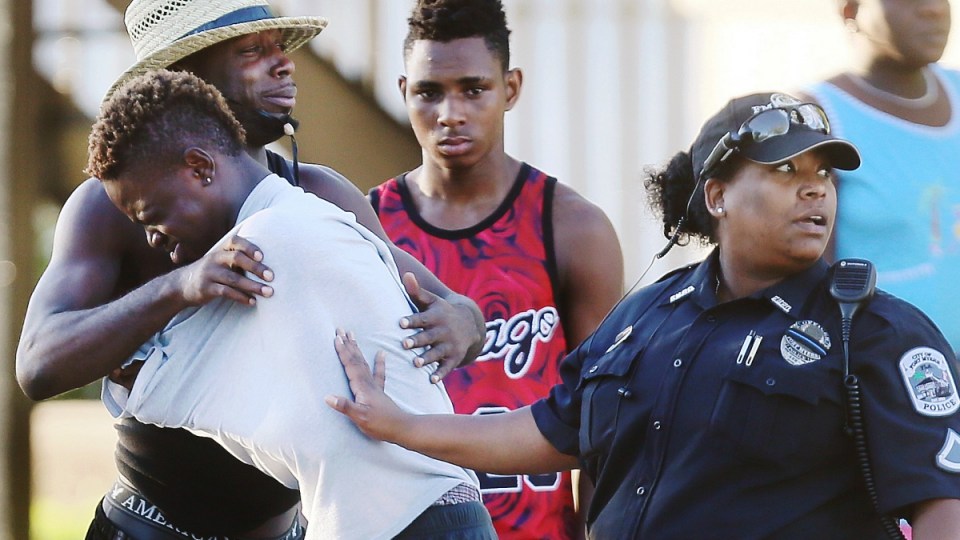 Children as young as 13 are believed to have been caught up in the shooting in Florida. Myers Photo: AP/AAP

The shooting outside a party for teenagers at a Florida nightclub where a 14-year-old and 18-year-old died and as many as 17 other people were wounded, was not an act of terror, police say.

The latest burst of gun violence to wrack the state took place just after 12.30am local time on Monday in the parking lot of Club Blu, where officers found “several victims suffering from gunshot wounds,” the Fort Myers Police Department said in a statement.

Police identified the two dead as Stef’An Strawder, an 18-year-old basketball star at a local high school, and Sean Archilles, 14.

“The Fort Myers Police Department would like to confirm that this incident is not an act of terror (as it has been referred) or terrorism.”

Besides the two fatalities, a local hospital said there were 17 other victims, ranging between ages 12 and 27. Police put the number of wounded at 14 to 16, with their injuries ranging from minor to life-threatening.

The shooting took place in the nightclub parking lot just after 12:30am local time.

Injuries ranged from minor to life-threatening.

Three people have been detained for questioning, police said, and the area was “deemed safe” although roads in the vicinity were closed as the investigation continued.

BREAKING: 2 dead at up to 17 hurt in overnight shooting at Club Blu in Fort Myers. Police searching for suspect now. pic.twitter.com/WQ49vmZs8v

Club Blu is located about 150 miles southwest of Orlando in the Gulf Coast city of Fort Myers.

The venue was hosting a “swimsuit glow party” for people of all ages, according to a flyer posted on Twitter by local television station WINK.

The nightclub said on its Facebook page that the shooting occurred when the venue was closing and parents were picking up their children, and that armed security guards were posted inside and outside the club.

“We tried to give the teens what we thought was a safe place to have a good time,” the statement said. “It was not kids at the party that did this despicable act.”

Cheryl Garn, a spokeswoman for Lee Memorial Hospital in Fort Myers, said victims arriving there were as young as 12 years old.

One of the victims died at the hospital, she said in a statement, while three others were admitted, one of them in critical condition and one in serious condition. The second victim died at the scene of the shooting.

A nearby home and vehicles were also shot at, resulting in one minor injury, CBS news reported.

The incident comes six weeks after 49 people were killed and 53 wounded at the Pulse Nightclub in Orlando.

Police killed that gunman, Omar Mateen, a 29-year-old US citizen of Afghan origin, after a three-hour standoff.

That rampage and other recent shootings have renewed debate about gun laws in the United States.