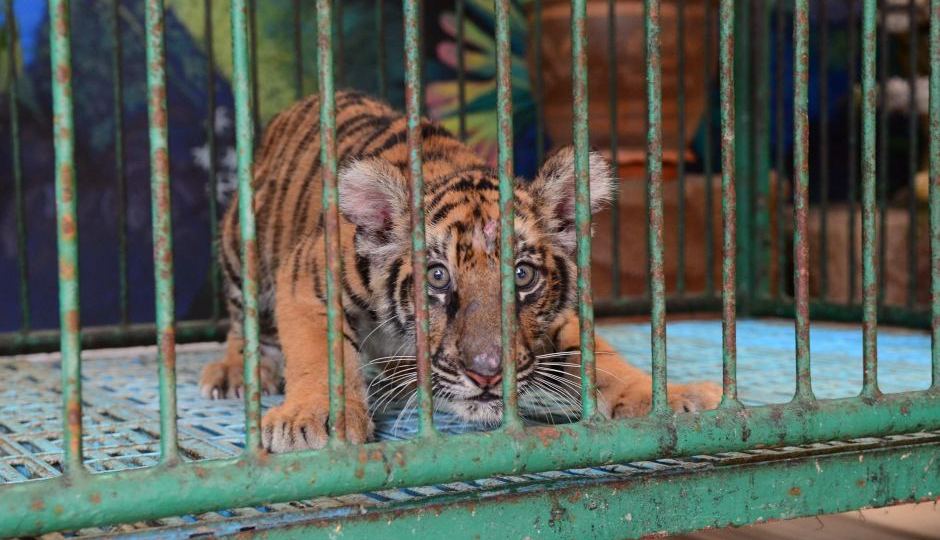 It is already widely reported that tigers at many entertainment venues endure lifelong suffering, often chained and confined in barren cages and subjected to harsh training processes to perform for tourists.

But WAP claims its report – Tiger selfies exposed: a portrait of Thailand’s tiger entertainment industry – is the first comprehensive analysis of the business in Thailand.

It has been released ahead of International Tiger Day on Friday, and in the wake of the scandal surrounding Thailand’s Tiger Temple.

Head of campaigns Nicola Beynon said the speed-breeding of captive tigers without any conservation benefits was a major concern.

She said common practice was to remove the cubs from their mother in the first few weeks after birth.

In the wild, cubs would remain with their mothers for about two years, with two to three years between litters.

“Tiger cubs are removed too early from the mother so the mother is weaned and ready to mate again within two to three weeks,” Ms Beynon told the ABC.

“Our message to tourists is don’t take a selfie with a wild animals, do not contribute money to this cruel trade.”
WAP head of campaigns Nicola Beynon

“It also has an advantage for the industry that the tiger cubs are hand-reared so they are more tame and compliant for when tourists handle them.”

Ms Beynon said early separation was very distressing for both the mother and her babies and could contribute to behavioural issues.

“One in 10 of the tigers that our researchers observed were exhibiting behavioural issues like pacing or nail-biting,” she said.

“The tigers taken from their mothers at a young age don’t learn any skills for natural behaviour from mothers and therefore they become helpless animals.”

“Venues charge a lot of money to cuddle and bottle feed them [tiger cubs]. Ten of the 17 venues were investigated are making money from cub interaction,” she said.

While WAP is calling on governments worldwide to investigate their tiger entertainment venues, Ms Beynon said tourists needed to take responsibility for their role in the keeping the “cruel” industry alive.

“Our current obsession with selfies and selfies with wildlife is most definitely driving this industry,” she said.

She said attractions are widely promoted by travel companies and online travel sites for tourists to get up close and personal with a captive tiger for a “once in a life-time” encounter.

“Our message to tourists is don’t take a selfie with a wild animals, do not contribute money to this cruel trade,” she said.

The report also uncovered discrepancies in reported versus observed tiger numbers which raises questions around animals potentially being bred illegally for body parts.

In June, all of the 147 tigers at the Tiger Temple in Kanchanaburi province were seized and it is accused of being linked with the illegal trade in tiger body parts.

While there is no evidence any of the other venues referred to in the report are involved in the unlawful trade, tiger number discrepancies have raised the suspicion of WAP.

“DNP (Department of National Parks) says it will investigate all of the entertainment venues for those sorts of irregularities,” Ms Beynon said.