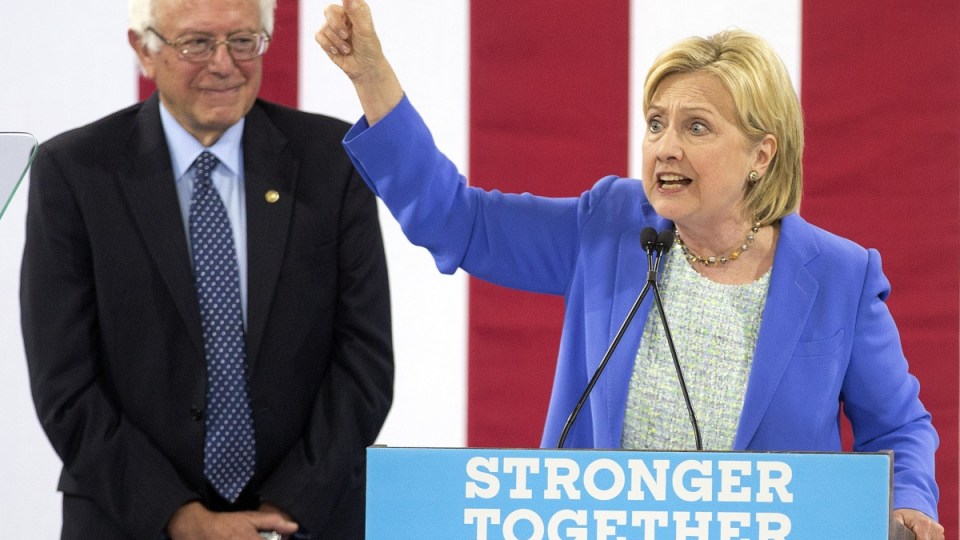 Hillary Clinton’s hopes for a backslapping festival at the Democratic Convention have been dashed amid claims that senior party officials rigged the nomination race against her rival, Bernie Sanders.

The chair of the Democratic National Committee, Debbie Wasserman Schultz, has quit her job after private emails published by Wikileaks show that she worked actively behind the scenes to scupper the Sanders’ campaign.

The decision means that Ms Wasserman Schulz – a personal friend of Mrs Clinton – will no longer preside over the party’s convention that kicks off in Philadelphia this week.

Publication of the emails sparked demonstrations by Sanders’ supporters in Philadelphia and New York at the weekend and raised fears that the convention would also be marred by protests.

Sanders’ supporters have been campaigning for the removal of Wasserman Schulz since January after they accused her of trying to stymie the Vermont senator’s bid for the presidential nomination.

Mr Sanders, who is scheduled to give the first keynote speech at the convention on Tuesday morning (Australian time), welcomed Ms Wasserman Schulz’ resignation.

“Debbie Wasserman Schultz has made the right decision for the future of the Democratic Party,” he said in a statement.

“While she deserves thanks for her years of service, the party now needs new leadership that will open the doors of the party and welcome in working people and young people.

“The party leadership must also always remain impartial in the presidential nominating process, something which did not occur in the 2016 race.”

Mrs Clinton did not comment on the charges of bias leveled at Wasserman Schultz, choosing instead to thank her “longtime friend”.

“I am grateful to Debbie for getting the Democratic Party to this year’s historic convention in Philadelphia, and I know that this week’s events will be a success thanks to her hard work and leadership,” Mrs Clinton said.

“There’s simply no one better at taking the fight to the Republicans than Debbie.”

The Federal Bureau of Investigation is investigating a cyber intrusion at the Democratic National Committee, amid concerns hackers working for Russia are attempting to use the breach to influence the US presidential election.

“A compromise of this nature is something we take very seriously, and the FBI will continue to investigate and hold accountable those who pose a threat in cyberspace,” the FBI said in a statement on Monday.

Emails among DNC employees were released by anti-secrecy group WikiLeaks over the weekend appearing to expose favouritism for presumptive Democratic nominee Mrs Clinton over her chief rival in the primary contest, Senator Sanders.

The DNC has since apologised to Mr Sanders, saying the emails did not reflect the committee’s “steadfast commitment to neutrality during the nominating process”.

“On behalf of everyone at the DNC, we want to offer a deep and sincere apology to Senator Sanders, his supporters, and the entire Democratic Party for the inexcusable remarks made over email,” the DNC said in a statement released on Monday, the opening day of the party’s convention in Philadelphia.

A cavalcade of celebrities from politics, music, film and sport will appear at the Democratic convention, after Mr Sanders and US First Lady Michelle Obama kick off proceedings on the first day.

While party organisers have kept the final schedule of speakers under wraps, a string of high-profile Americans will attend the convention, including Latina rights activist and Hollywood star, Eva Longoria.

Ms Longoria is tipped to deliver a stinging attack on the plans of Republican nominee Donald Trump to build a 2000-mile wall along the border of Mexico and the United States.

Since rising to stardom in her role in the hit television series Desperate Housewives, Ms Longoria has dedicated most of her time to funding education programs for migrant workers in southern Florida.

She is also supporting a program to encourage nationalised immigrants to vote in the forthcoming presidential election.

The Democratic convention will be held at several venues in the city of Philadelphia, but the keynote speeches of Mrs Clinton and her supporters will be held at the Wells Fargo Centre.

In light of concerns over Mrs Clinton’s close relationships with big banks, it is somewhat ironic that she will be formally announced as the Democratic nominee for president at a venue that carries the moniker of one of America’s biggest banks.

Wells Fargo is the largest bank in the world on a measure of market capitalisation.

Executives and staff of Wells Fargo Bank have been among the largest contributors to Mrs Clinton’s campaign since the beginning of 2015, according to official returns lodged with the US Federal Elections Commission.

Democrats stumble on eve of convention