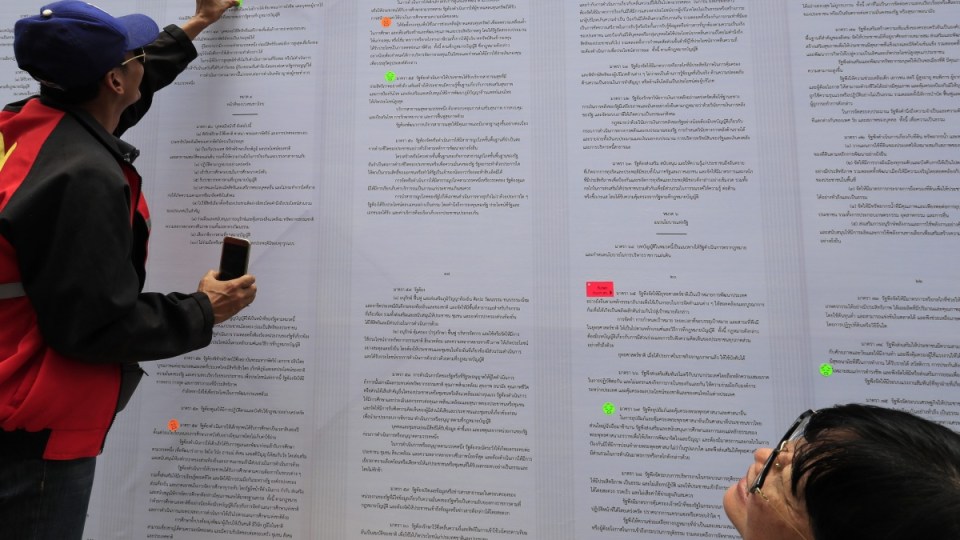 A giant draft constitution made into a wall, during the Free Fair in Bangkok. Photo: AAP

Two eight-year-old Thai girls with a penchant for the colour pink have been charged with violating campaigning rules ahead of the military government’s referendum next month.

The two girls were arrested last week after they tore voter lists off a wall because they liked the coloured paper they were printed on.

Thailand’s military government has clamped down on dissent ahead of the country’s August 7 vote on a military-backed constitution, which it says will ensure stability in a country rocked by political turmoil for more than a decade.

Damrong Phetpong, police commander in the northern province of Kamphaeng Phet, said the girls were charged with obstructing the referendum process and destroying public property after tearing down the lists posted outside a school.

“They confessed to tearing down the voter lists because they liked the colour pink,” Damrong told Reuters news agency.

He said the pair will not face punishment because of their age, but police are still bound to file charges.

Police had initially thought that anti-government activists were responsible for the missing voter lists, but an investigation eventually led officers to the girls.

The military junta opened monitoring centres across Thailand this month and is on high alert to block any movement against the constitution from supporters of the ousted government, who are expected to attempt to vote it down.

Thai English language news site Khaosod English reported that the original police chief in charge of the case lost his job for not taking the incident seriously enough.

It said the original police report concluded the girls “believed that the pink-coloured paper was beautiful” so they tore it off and kept it.

Local police station chief Itthi Chamnanmor didn’t file a report about the incident to his supervisor and was subsequently transferred to an inactive post and placed under disciplinary investigation.

Khaosod English said a statement released to the media said Itthi broke protocol by letting Chanasit find out about the girls’ antics from the media instead of an internal report.

Authorities have outlawed critical discussion of the new constitution ahead of the vote, with the threat of a 10-year prison sentence.

The military, which seized power from an elected government in May 2014, say its draft constitution will provide much-needed stability.

“The girls believed the the pink-coloured paper was beautiful.”
The original police report

The junta’s critics, including major political parties, say the charter would give the military too much power over elected governments, and would not resolve fundamental differences between populist political forces and the military-dominated establishment.

A satellite TV station critical of the junta was shut down last week.

The referendum will be the first big test of the public’s opinion of the military government since it came to power.