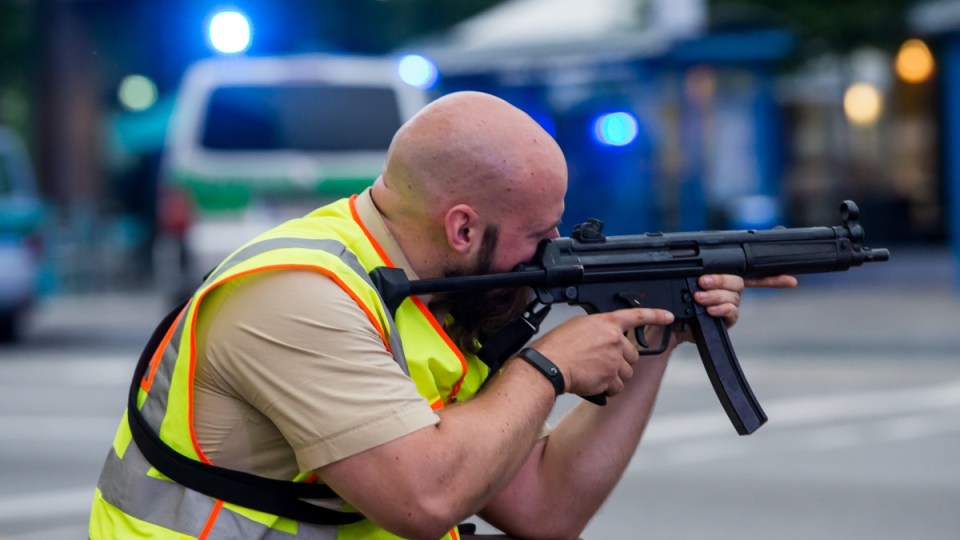 Police have been unable to unearth a motive for the rampage. Photo: Getty

A week after a horrific terror attack claimed 84 lives in Nice, Europe is struggling to come to terms with another day of senseless violence.

Just days ago, crowds jeered France’s leaders at a tribute to victims of Nice, as an opinion poll showed a sharp drop in confidence in the ability of President Francois Hollande’s government to combat terrorism.

In peak holiday season, the continent has fallen into an even deeper state of anxiety, wondering which city will suffer next after a lone gunman slaughtered nine and injured 27 in Munich on Saturday (AEST).

The Munich shooting was the third act of violence against civilians in Western Europe – and the second in southern Germany – in eight days.

The 18-year-old, born and raised locally, opened fire near a busy shopping mall on Friday evening, triggering a lockdown in the Bavarian state capital.

Seven of his victims were themselves teenagers, who police said he may have lured to their deaths via a hacked Facebook account on what was the fifth anniversary of twin attacks by Norwegian mass murderer Anders Breivik that killed 77 people.

Bavarian state crime office president Robert Heimberger said the gunman, who German media named as Ali David Sonboly, was carrying more than 300 bullets in his backpack and pistol when he was later found dead of a gunshot wound.

Following a police search of the attacker’s room, where a book on teenage shooting sprees was discovered, Munich police chief Hubertus Andrae all but ruled out an Islamist militant link in the attack.

“Documents on shooting sprees were found, so the perpetrator obviously researched this subject intensively,” Andrae said.

The gunman had spent time in psychiatric care, and there was no evidence to suggest he had an accomplice.

Interior Minister Thomas de Maiziere said it was also too early to associate the Munich shootings with Breivik, who in 2011 shot dead 69 attendees at a youth summer camp hours after murdering eight others by detonating a van bomb in Oslo.

Robert Heimberger, president of the Bavarian state criminal agency, told the news conference police were investigating findings suggesting the Munich gunman invited people to a fast food restaurant at the mall via the Facebook account.

Turkey’s foreign minister said three Turkish citizens were among nine people killed in the Munich attack while Greece’s foreign ministry said one Greek was among the dead.

According to foreign media reports, there were also three Kosovo Albanian victims.

Police commandos raided an apartment in the Munich neighbourhood of Maxvorstadt early on Saturday, where a neighbour said the gunman had lived with his parents for about four years.

In the killer’s room, police found a German translation of a book entitled Why Kids Kill – Inside the Minds of School Shooters.

Asked if the gunman had deliberately targeted young people, Munich police chief Andrae said that theory could be neither confirmed or ruled out.

Bavarian Interior Minister Joachim Herrmann said there were several signs he had been suffering from “not insignificant psychological troubles”.

Police will also have to find out how the 18-year-old obtained the firearm in a country whose gun control system is described by the US Library of Congress as being “among the most stringent in Europe”.

As the horror unfolded, police had warned of an “acute terror” situation in the southern German city, which saw panicked shoppers fleeing a mall as armed police roamed the streets on the hunt for the attacker.

Munich police received a call at 5.52pm local time about the shooting and the news spread quickly via social media.

The blood bath started at a McDonald’s with multiple shots fired on Hanauer Street before the attacker moved to the Olympia Einkaufszentrum shopping centre in the south German city at about 6pm.

The shooting spree incited mass panic in the city of 1.4 million inhabitants.

In the city centre, people sought shelter in office buildings and restaurants.

A young woman sat down on the stone steps of an office building.

“I don’t want to die,” she sobbed. “You are safe here,” another woman said, trying to soothe her.

About 20 to 30 people fled into the basement of the Il Sogno restaurant.

Others screamed as they ran into the kitchen of a McDonald’s outlet on Karlsplatz. A member of staff quickly blocked all the doors.

#offenetuer Mother and 12 year old stu ck in Valpiano Restaurant, Fünfe Hofe Gallery, on Theatinnerst. Anyone to shelter them for tonight?

Meanwhile, the pedestrian area in the centre leading from Karlsplatz to the main central square, Marienplatz, was deserted.

In the midst of the horror, an Australian woman travelling in Munich was praised online for her kindness in a time of crisis.

New York Times correspondent Rukmini Callimachi took to Twitter to praise Donna Bravo for risking her life to comfort a terrified 22-year-old girl as the shooting broke out.

“Donna was on her ‘Eat Pray Love’ tour of Europe when the shooting erupted and a 22-year-old girl in panic jumped out of hotel window,” Ms Callimachi shared on Twitter.

“Donna – who is a caretaker in Australia – was just getting ready to go out and was wearing a black cocktail dress but no shoes.

“So she grabbed all she could find – flip flops – and ran outside to comfort girl who had injured her spine in the fall, holding her hand.”

Ms Callimachi revealed Ms Bravo stayed by the girl’s side all the way into surgery, phoned her parents and remained in the hospital waiting room till well after midnight.

“The injured girl is also a tourist from overseas and Donna called her parents who are rushing to get here,” Ms Callimachi revealed.

“Donna is planning to stay up all night until the girl – a stranger – gets out of surgery so that she is not alone when she wakes up.