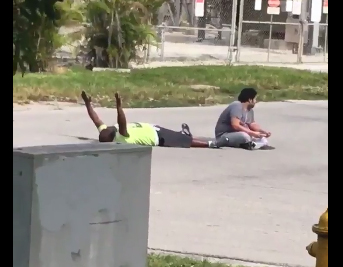 A grab of Charles Kinsey with his hands in the air. Photo: Twitter

The United States is grappling with yet another shooting of an African-American man, this time in Florida.

Police reportedly shot the man while he was trying to help one of his patients with autism. Video footage shows the man lying on the ground with his arms raised in the air and pleading with officers to hold their fire.

Charles Kinsey’s leg was injured in the incident on Monday in Miami, which came as he says he was trying to help a disoriented autistic man who had wandered away from a group home where Mr Kinsey works as a behavioural therapist.

Police said they were responding to an emergency call about a man with a gun walking around and threatening suicide.

A video posted on Twitter by Miami journalist Todd Tongen appears to show Mr Kinsey on the ground with his arms in the air, with the young autistic man sitting on the ground nearby playing with a small white toy.

In the video, Mr Kinsey can be heard shouting: “All he has is a toy truck. A toy truck. I am a behavioural therapist at a group home.”

He says he was shot anyway. The video ends before that.

Video of an unarmed Charles Kinsey trying to help autistic client just b4 he is shot by @NorthMiamiPD @WPLGLocal10 pic.twitter.com/1Nt9v1nFtZ

Mr Kinsey also urged his patient to lie down and be still, but the man told him to “shut up” and did not comply.

A further video posted by Florida journalist Todd Tongen appears to show police cuffing Mr Kinsey after he had been shot.

Insult to injury @NorthMiamiPD cuff unarmed man they shot while he was trying to help autism client @WPLGLocal10 pic.twitter.com/iLaAZTLouG

Mr Kinsey, 47, was not seriously hurt. He told Florida TV station WSVN-Channel 7 that as he lay on the ground he told police that he was unarmed.