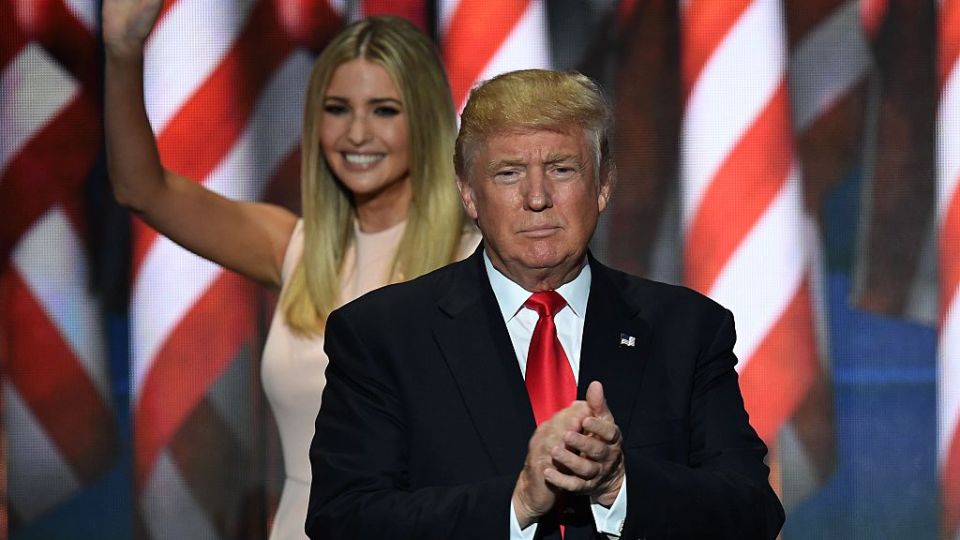 'The Donald' was upstaged by his favourite child. Photo: Getty

He focussed heavily on the foreign terror threat “crisis” and unruly immigrants, leading senior Hilary Clinton advisor John Podesta to dub the speech, “a dark picture of an America in decline”.

A New York Times editorial slammed the speech as an “empty sales pitch” that presented a “wildly distorted view” of America.

Trump surprised some viewers with some relatively centrist comments and by emphasising the importance of LGBTIQ and African-American rights, but not before daughter Ivanka stole the show.

Trump’s eldest daughter was called on to introduce the businessman-cum-politician to the stage, and in doing so, argued vehemently that her father was a champion of women’s rights.

For most of his campaign, Trump’s strategy has been to upset what he sees as the politically-correct status quo.

Trump has suggested a plane heard flying above one rally could be Mexicans preparing to attack the USA, dubbed a Native American senator ‘Pocahontas’ and claimed “women get it better than men” in society.

But on Friday, Trump’s speech seemed to make a grab for multiple minority groups traditionally thought to be the domain of the Democrats.

“As your president, I will do everything in my power to protect our LGBT citizens from the violence and oppression of a hateful foreign ideology,” Trump said, referring to the 49 Pulse Nightclub victims as “wonderful Americans”.

He also emphasised the need to make sure all kids were “treated and protected equally”.

“Every action I take, I will ask myself: does this make life better for young Americans in Baltimore, Chicago, Detroit, Ferguson?” he said.

Trump’s senior advisors clearly thought Ivanka was the best person to refute her father’s reputation as a sexist.

“As the proud daughter of your nominee I’m here to tell you that this is the moment and Donald Trump is the person to make America great again,” declared Ivanka, before speaking on Trump’s record of hiring and fairly paying women.

“Long before it was commonplace, you also saw women [on his worksites],” Ivanka said, describing her father as both “colour blind and gender neutral”.

“At my father’s company there’s more female than male executives, women are paid equally … and when a women becomes a mother she is supported, not shut out.”

Arguably the least controversial – and the irrefutable golden child – of Trump’s five spawn, Ivanka even seemed to offer herself up as a political assistant.

“I will fight beside him,” she announced, referring to Trump’s battle for women’s rights in America.

Ivanka, executive vice president of development and acquisitions at The Trump Organisation and the stylish mother of three young children, has been one of Trump’s best assets in his controversial campaign.

Well spoken and well educated, Ivanka has often put out Trump’s fires by praising his ‘realness’.

“The only filter is himself,” she told Good Morning America earlier this week, arguing that Trump’s tendency for getting into hot water with his comments was a symptom of not being afraid to speak his mind.

“He is the messenger of the people,” she said.