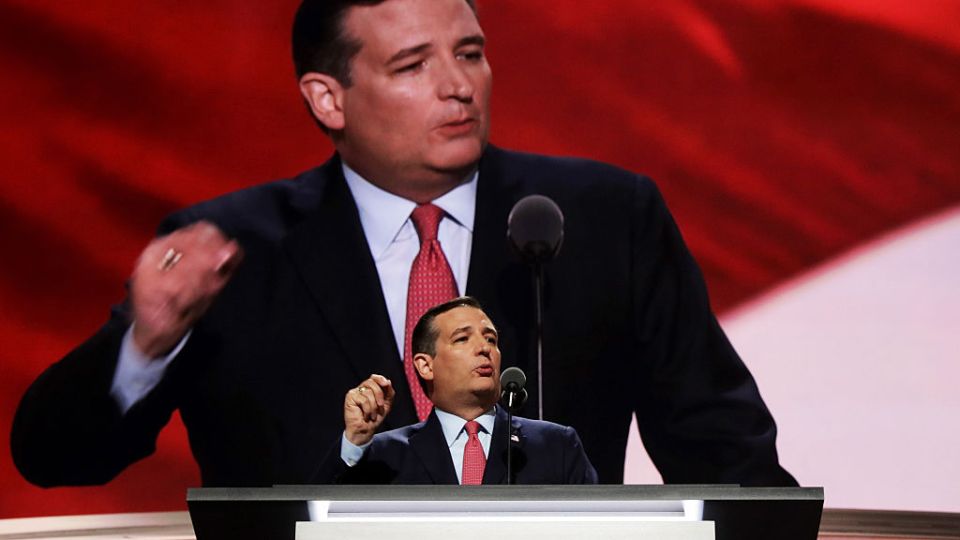 Texas Senator Ted Cruz has refused to endorse Republican presidential nominee Donald Trump at the party’s convention, sparking an eruption of angry jeers from Trump supporters and shattering the facade of party unity that has been carefully built up in Cleveland this week.

Cruz, who came in a distant second behind Trump in the race for the nomination, stopped short of endorsing Trump after a bitter and personal campaign and mentioned him only once, drawing boos and repeated chants of “We want Trump”.

Anti-Trump Republican delegate Ken Cuccinelli said he escorted Cruz’s wife, Heidi, off the floor of the Republican National Convention out of concern for her safety.

“During the course of the speech, more and more people were coming down closer and closer to Heidi and (Ted Cruz’s father) Rafael … When the speech ended, there was an ugly crowd behind us. She was trying to leave,” he said.

A witness said one person shouted: “Goldman Sachs” at Heidi Cruz in reference to her employment at the investment bank.

Later in the speech, he urged: “Please, don’t stay home in November. Stand, and speak, and vote your conscience, vote for candidates up and down the ticket who you trust to defend our freedom and to be faithful to the Constitution.”

Trump, who will represent the party in the November 8 election against presumptive Democratic nominee Hillary Clinton, made his entrance to the convention hall near the end of Cruz’s speech, applauding Cruz’s remarks but, by his appearance, distracting the crowd from his former rival.

In a tweet after the convention adjourned for the night, Trump wrote that Cruz broke a promise they both had made to endorse the party’s White House choice.

“Wow, Ted Cruz got booed off the stage, didn’t honor the pledge! I saw his speech two hours early but let him speak anyway. No big deal!” Trump wrote immediately after the Convention in Cleveland ended.

The drama did not prevent Trump’s vice presidential running mate, Indiana Governor Mike Pence, from receiving a raucous welcome inside the convention hall.

Accepting the convention’s nomination, Pence spoke of Trump as a friend of the working class who has persevered in the business world.

“He’s a doer in a game usually reserved for talkers,” Pence said.

Meanwhile Cleveland police arrested 18 protesters after scuffling with demonstrators who tried to set an American flag on fire.

Fifteen of the 16 other people arrested were charged with a misdemeanour offence of inciting violence near the crowded Quicken Loans Arena, police said.

Wednesday’s incident saw the largest number of arrests during the four-day convention, which ends on Thursday, and brought the total number arrested to 23, according to officials.

Ted Cruz booed as he fails to endorse Trump