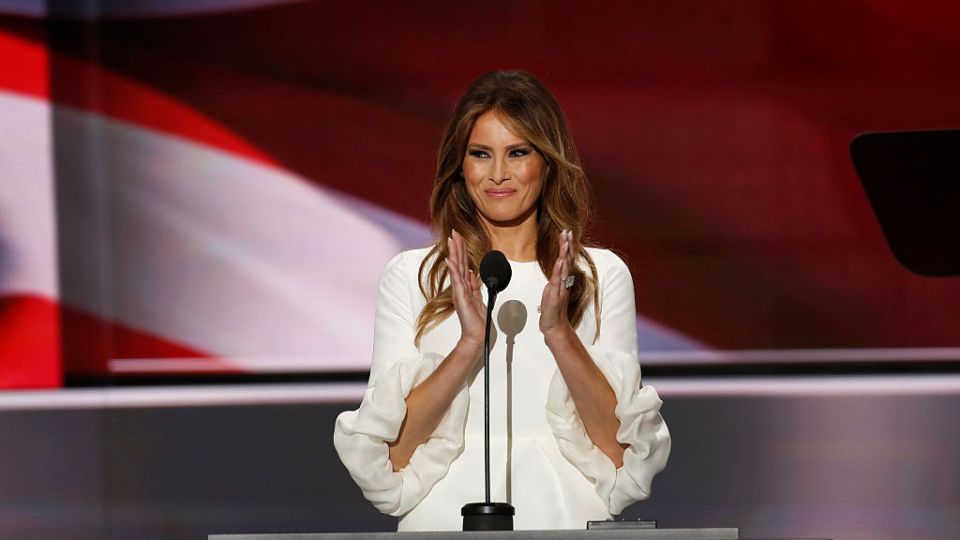 Melania Trump's speech took the attention away from her husband. Photo: Getty

An astrophysicist has used the power of mathematics to prove Melania Trump’s speech was plagiarised from First Lady Michelle Obama.

While Twitter and Facebook went into meltdown over the similarities between Melania Trump’s Republican convention speech and Mrs Obama’s 2008 Democratic convention speech, Bob Rutledge busily calculated the probability that Donald Trump’s wife had not plagiarised it.

“Let’s forget the fact that having the same thematic thrust between Melania Trump’s passage and Michelle Obama’s passage feels too coincidental,” the Montreal-based professor said.

“Let’s forget the fact that there are lots of synonyms that Melania Trump could have used instead of ‘word is your bond’, ‘achievements’ and ‘treat people with … respect’, which would have made her passage deviate from that of the First Lady’s passage.”

Then, he asked the calculable question

“They could be used in almost any ordering, with additional wording, to say the same things as Melania Trump and Michelle Obama said,” he said.

“But what is the probability that Melania Trump would say them in the exact same ordering as Michelle Obama chose to?”

Okay, this could make your brain hurt

Permutations are each of the several possible ways in which a set of numbers, words or things can be ordered or arranged.

In order to figure out the likelihood of Melania Trump would say the fourteen distinct phrases in the exact same order at Michelle Obama, you have to look at how many other ways the phrases could have been ordered.

This is where the calculation comes in.

“Choose one of the fourteen phrases, and write it down — that’s 14 possibilities to start the ordering off,” he said.

“But that’s just the first phrases! For the second phrase, choose one of the remaining 13 phrases, and write it down.

Get ready for a really big number

Based on that calculation, the chances that the speech was not plagiarised were one in 87 billion.

You read correctly, one in 87 billion.

Or as Professor Rutledge’s put it: “about the number of stars in the Milky Way Galaxy”.

“So never mind [Trump’s campaign director Paul] Manafort’s claim that there are a limited number of words in the English language,” he wrote.

“For Melania Trump to have gotten all 14 of those phrases, in the same order as Michelle Obama did at the 2008 Democratic National Convention, is a chance of 1 in 87 billion — about 7,000 times less likely than winning [Canada’s] Lotto 6/49.

And who said high school calculus wouldn’t be useful in real life?