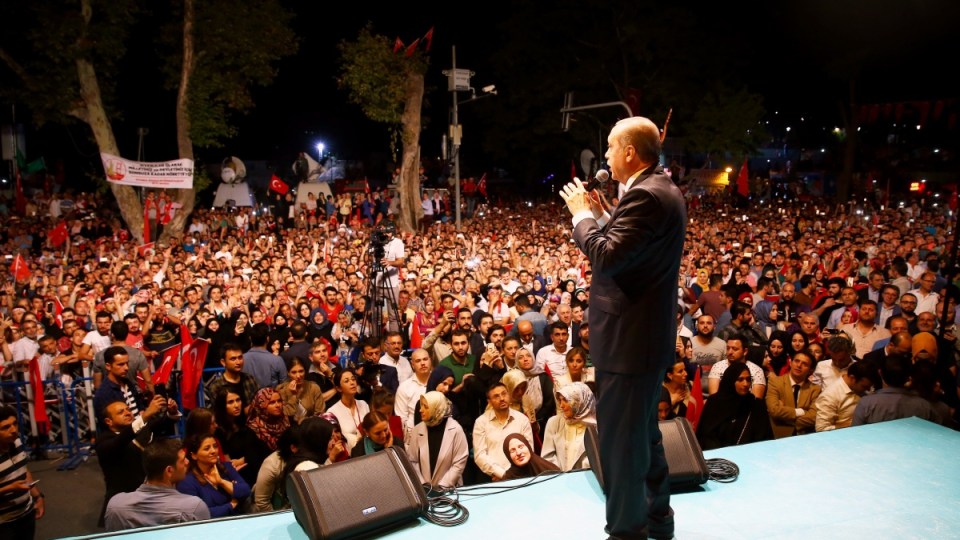 The Turkish president has been a big winner from the failed coup. Photo: Getty

A growing number of observers are openly musing that the authoritarian leader may staged the coup himself in order to facilitate a crackdown on opponents.

Questions are being asked as to why coup leaders did not take control of communications (including the internet), did not target Erdogan directly, did not shoot down his plane when they had the opportunity and, instead of urging their supporters to take to the streets, told them to go home, leaving the streets in control of government supporters.

The government also appeared to have well-prepared lists of people it wished to dismiss or imprison.

Observers around the world have also questioned why the coup was so ineptly managed as to appear doomed to failure.

Author of seven books on Turkey, Cengiz Candar, has described the coup as amateurish, bizarre and unprofessional.

“As a veteran observer of military coups and coup attempts in Turkey, I have never seen any with this magnitude of such inexplicable sloppiness,” Candar said.

At the very least, the authoritarian Erdogan has taken full advantage of the situation.

More than 50,000 people have now been either arrested or sacked from their government posts, including every university dean in the country along with almost 20,000 teachers.

Almost 3000 judges have been suspended, 9000 police sacked and 6000 military personnel arrested or dismissed.

The latest purge of anyone opposed to President Erdogan has come after three years of repression of free speech and is seen as a move to take Turkey back to its Islamist past and to throw off the influences of Westernisation and secular forms of government.

This week, thousands of Erdogan’s followers chanted “Allahu Akhbar”, or God is great, in the streets, the same phrase used by jihadists during their massacres.

Exiled cleric Fethullah Gulen, who has been resident in the US since a failed coup in 1999, is being blamed by Erdogan for being behind the coup, claims the elderly Gulen denies.

“There is a possibility that it could be a staged coup,” Gulen said in a rare interview with The Guardian newspaper. “It appears that they have no tolerance for any movement, any group, any organisation that is not under their total control.”

World leaders have urged Turkey to show restraint and respect for human rights in the wake of the attempted coup, which left at least 265 dead and 1400 wounded, but appeared disorganised and leaderless.

Dr Murat Yurtbilir, from the Centre for Arab and Islamic Studies at the Australian National University in Canberra, told The New Daily he believed that while the Turkish government did not plan the coup, it knew about it several days beforehand.

That forewarning explains the prepared lists of people to be targeted or arrested, including those concerned about the growing Islamisation of the Turkish Army.

“Now he is conducting a witch hunt and is using every political opportunity for his purposes. The coup has been fortunate for him.”
Dr Murat Yurtbilir from the ANU's Centre for Arab and Islamic Studies

“Erdogan is very authoritarian, very Islamist,” Dr Yurtbilir said. “Now he is conducting a witch hunt and is using every political opportunity for his purposes. The coup has been fortunate for him.”

Dr Yurtbilir said while President Erdogan did not publicly say he supported the introduction of Islamic Shariah Law, he constantly used Islam as a political tool.

“He uses Islamic discourse in all his policies,” he said. “He is aiming to create a more conservative, Islamic society.”

In the murky world of Middle Eastern politics, President Erdogan and his family have been accused of profiting from oil and weapons trade with Islamic State.

Terror expert Professor Greg Barton told The New Daily that President Erdogan had described the attempted coup as a “Gift from God” which would enable him to cleanse the military.

“The total picture looks like a very half-baked coup, either that or they were not serious,” he said. “Although we cannot prove that it was organised by Erdogan, it does not stand up to plausibility to say it was masterminded by his political opponent Gulen, a 75-year-old asthmatic living in Pennsylvania.”

Professor Barton said those being targeted for imprisonment or dismissal went well beyond those who could have been directly involved in a coup, including the university deans, 8,777 Interior Ministry staff and even 257 people from the Prime Minister’s office.

“We have had three years of autocratic authoritarianism, how is it possible all these 50,000 who have been imprisoned or sacked were still in power?” Professor Barton said.

“The attempted coup is a pretext. Half the country now support the president, the other half have been cowed into silence. Erdogan sees himself as doing the work of God by making Turkey more Islamic.”