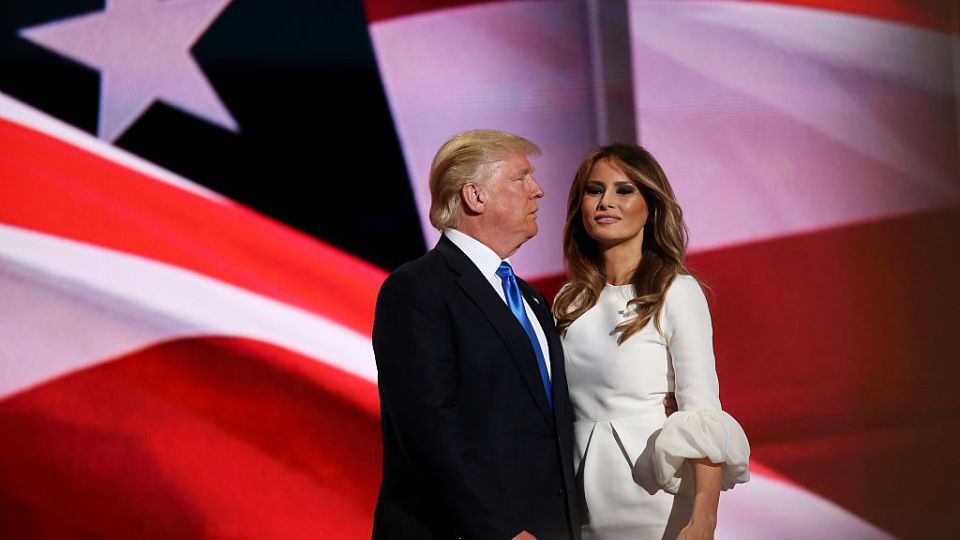 The speech was mysteriously leaked by a "Republican source". Photo: Getty

Donald Trump’s wife Melania has been accused of plagiarising a 2008 Michelle Obama speech for her address at the Republican National Convention.

The presumed Republican candidate’s wife appeared to lift at least two passages from the outgoing First Lady’s 2008 address at the Democratic convention.

Twitter was swift to pick up on the surprisingly similarity of Ms Trump’s speech – received by Republicans with rapturous applause.

Journalist Jarrett Hill was one of the first to level the accusation.

Melania Trump’s speech is being compared to one given by First Lady Michelle Obama in 2008 #TheDrum #RNCinCLE pic.twitter.com/rm3Fgn9Z69

It didn’t take long for people to dig up video from Obama’s 2008 address and discover an entire paragraph bore striking similarities to Melania Trump’s words as her husband walked onstage, lit up like a character from Star Trek. ‘I wrote it by myself’

A representative for the Trump campaign later released a statement on the speech, but chose not to refer to the plagiarism allegations.

“In writing her beautiful speech, Melania’s team of writers took notes on her life’s inspirations, and in some instances included fragments that reflected her own thinking. Melania’s immigrant experience and love for America shone through in her speech, which made it such a success,” said Jason Miller, senior communications adviser. Melania Trump also tweeted the statement.

Earlier that day, she had told US news site NBC she wrote the speech with “as little help as possible” from any of her husband’s many advisors.

Reactions to the plagiarism accusations were swift and fierce.

Twitter users wasted no time in creating dozens of memes, one popular example playing on Michelle Obama’s campaign to rescue the hundreds of young girls kidnapped by terrorist group Boko Haram in Nigeria.

"I, am Malcolm X.” #FamousMelaniaTrumpQuotes

"In the beginning God created the heavens and the earth…" #FamousMelaniaTrumpQuotes pic.twitter.com/bLe51c1Bgp

"In West Philadelphia born and raised, on the playground is where I spent most of my days." #FamousMelaniaTrumpQuotes

The focus on plagiarism unsurprisingly detracted from the bulk of her address, which centred on US immigration, her belief in her husband and her own immigrant upbringing.

It was one of the only times the American voting public has heard from Donald Trump’s wife – who is notoriously private – in a personal context.

And yet even elements of Melania Trump’s own personal narrative appeared similar to Obama’s.

“My elegant and hard-working mother, Amalija, introduced me to fashion and beauty,” Trump said of her family life.

“My father, Viktor, instilled in me a passion for business and travel.

“Their integrity, compassion and intelligence reflects to this day on me and for my love of family and America.”

The last line of that sentence bore a similarity to Obama’s sentiments about her own family.

“My mother’s love has always been a sustaining force for our family, and one of my greatest joys is seeing her integrity, her compassion and her intelligence reflected in my own daughters,” she said in 2008.

Representatives for Michelle and Barack Obama have not commented on the accusations.