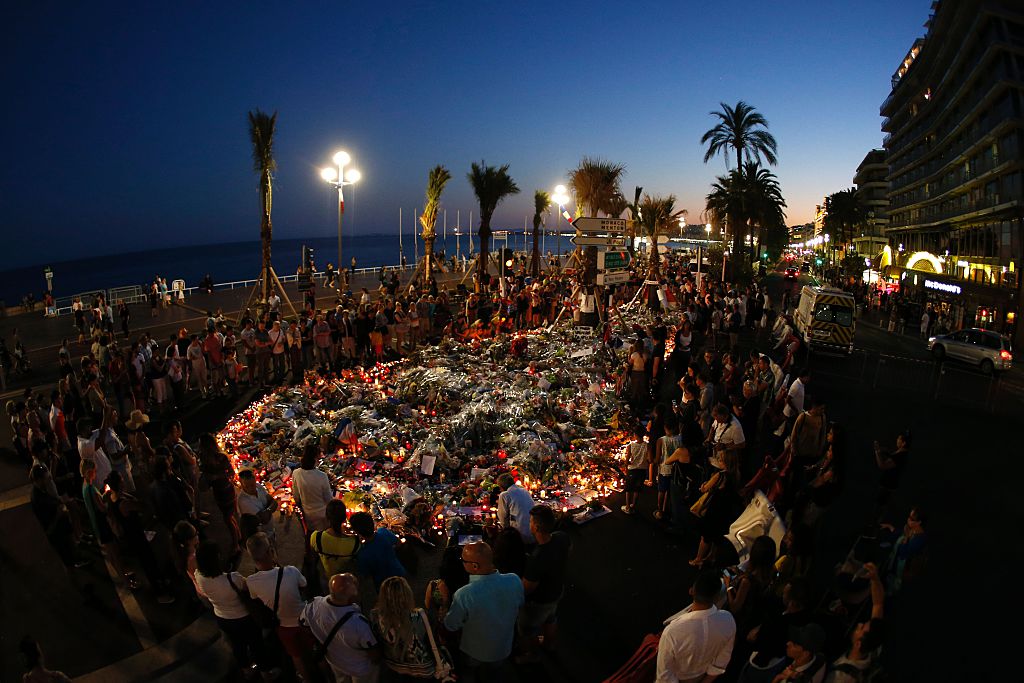 People gather at a makeshift memorial on the Promenade des Anglais in Nice. Photo: Getty

The man who mowed through a crowd with a truck, killing 84 Bastille Day revellers in Nice on Thursday, had phoned home hours earlier and sent a “laughing” picture from the French city, his brother has told Reuters.

During a visit to Nice on Sunday, French Health Minister Marisol Touraine said 18 people, including a child, were still in a critical condition, while about 85 people in total were in hospital.

“That last day he said he was in Nice with his European friends to celebrate the national holiday,” Bouhlel’s brother Jabeur told Reuters in their native Tunisia.

In the photograph, “he seemed very happy and pleased, he was laughing a lot”.

Reuters could not verify the existence of the photograph, which Jabeur declined to share.

The attacks, along with one in Brussels four months ago, have shocked Western Europe, already anxious over security challenges from mass immigration, open borders and pockets of Islamist radicalism.

Two more people, a man and a woman close to Bouhlel, were arrested in Nice early on Sunday and another person in the afternoon.

Four others arrested previously were still being held, but Bouhlel’s estranged wife was released without charge after being held since Friday.

In a pointer to a possible accomplice, one of these seven people still held by police had received a text from the killer thanking that person for providing a weapon, a source close to the investigation told Reuters.

Islamic State has claimed the attack, calling Bouhlel one of its soldiers, but authorities have yet to produce evidence that the 31-year-old, shot dead by police, had any actual links to the militant group.

Prime Minister Manuel Valls said there was no doubting the assailant’s motives.

“The investigation will establish the facts, but we know now that the killer was radicalised very quickly,” he told newspaper Le Journal du Dimanche.

As of Sunday no evidence had been produced to show how he underwent that rapid transformation from someone with no apparent interest in religion.

Relatives and friends interviewed in Nice painted a picture of a man who at least until recently drank alcohol, smoked marijuana and according to French media even ate pork, behaviour that would be unlikely in a devout Muslim.

A report in the Nice Matin newspaper said investigators had found no radical material in his flat, although they were still looking at his telephone and computer.

Speaking from his home town in Tunisia, Bouhlel’s sister told Reuters he had been having psychological problems when he left for France in 2005 and had sought medical treatment.