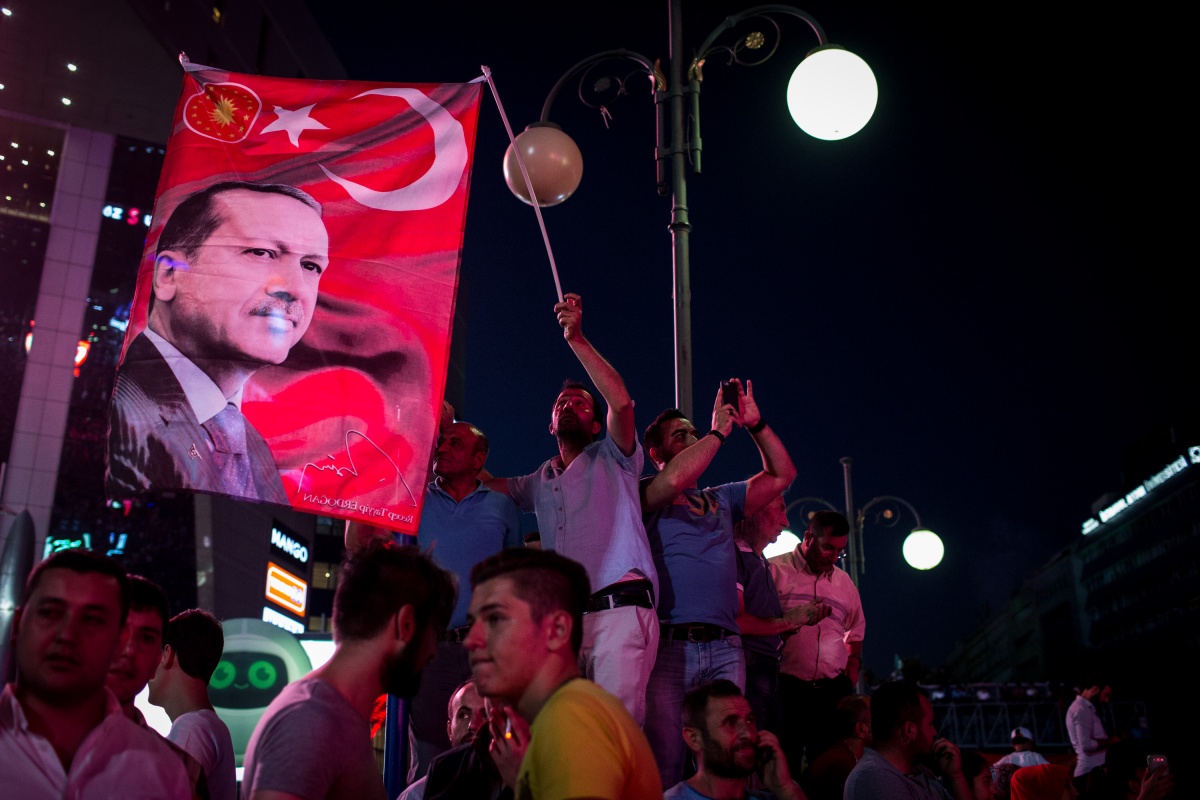 President Recep Tayyip Erdogan is emerging as a big winner of the weekend’s failed Turkish coup as the hard-line leader is using the situation as an opportunity to purge dissenting voices from the country’s military and judiciary.

At least 265 people were killed and more than 1500 injured in the short-lived coup that was launched early Saturday (AEST).

In what appeared to be a carefully planned and co-ordinated operation, forces from a section of the Turkish security services calling themselves a “Peace Council” moved in to occupy strategic points throughout Istanbul, including bridges, the state television station and the airport.

Mr Erdogan was forced to address his country via FaceTime on his mobile phone from his holiday location in Marmaris, southern Turkey.

Thousands of his supporters poured onto the streets of Istanbul, Ankara and Izmir on Saturday night local time, joining forces loyal to the President to suppress the rising.

The army’s acting chief of staff, Umit Dundar, told a news conference on Saturday that 104 so-called coup plotters and at least 47 civilians had been killed.

Mr Erdogan’s revenge on the “traitors” has been swift and ruthless, with almost 3000 troops suspected of a part in the plot rounded up and arrest warrants issued for for 2745 judges and prosecutors in what is widely expected to mark the start of a purge of opposition forces.

“They will pay a heavy price for this,” Mr Erdogan said. “This uprising is a gift from God to us because this will be a reason to cleanse our army.”

“The judicial process on this will continue,” broadcaster NTV quoted Justice Minister Bekir Bozdag as saying.

The armed services last used force to stage a successful coup in Turkey more than 30 years ago.

General Erdal Ozturk, the commander of the Third Army Corps in Istanbul, faces charges of treason for his role in an attempted coup, while eight leading members of the failed plot have fled to Greece.

Although capital punishment has been abolished in Turkey as part of the country’s bid to join the European Union, Mr Erdogan has signalled he is considering bringing back the death penalty to punish the ringleaders.

Amnesty International urged Turkey not to use the death penalty against detained plotters, but Mr Erdogan told supporters capital punishment was a matter for parliament, noting that “it is a right in a democratic country that each demand be assessed, discussed and debated”.

Mr Erdogan has blamed the coup on supporters of US-based Turkish cleric Fethullah Gulen, who he has frequently accused of trying to foment uprising in the military, media and judiciary.

Gulen condemned the coup, saying “governments should be won through a process of free and fair elections, not force”, according to a report by German news agency DPA.

Mr Erdogan called on the US to either arrest or extradite the Islamic cleric.

US President Barack Obama expressed support for Turkey’s government, but his secretary of state John Kerry warned Turkish Foreign Minister Mevlut Cavusoglu that public suggestions of a US role in the plot were “utterly false” and harmful to relations.

Mr Erdogan, who served as prime minister before becoming president, has faced growing secular anger over his increasingly authoritarian regime and abuses of human rights, including jailing journalists and censoring media after sensational corruption scandals and his violent response to the Gezi Park protests of 2013.

Erdogan is a divisive figure in Turkey where he is passionately supported by about half the population, but despised by the other half.
Follow Us