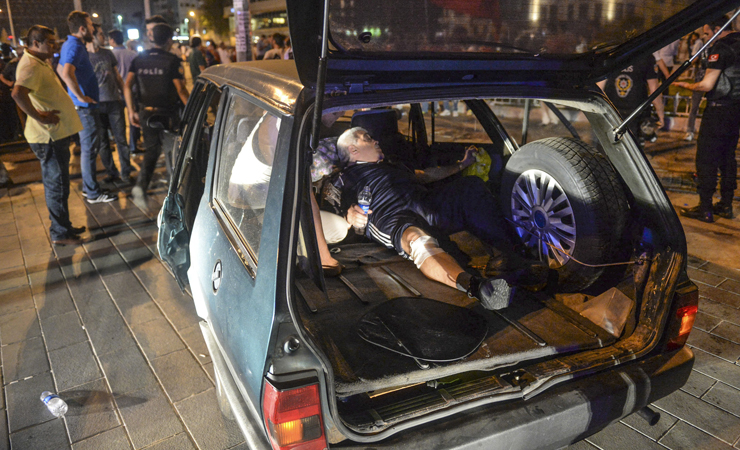 More than 1,500 rebel soldiers have been detained in what appears to be the dying hours of an attempted military coup in Turkey, believed to have killed as many as 200 people and injured more than 1,150, according to state media.

Earlier, airports were shut and troops sealed off the two bridges over the Bosphorus Strait, while gunfire and an explosions were heard as warplanes and helicopters roared over Ankara and Istanbul.

A leading academic says the attempted military coup in Turkey, whether it fails or succeeds, could only further destabilise an already insecure region.

Professor Amin Saikal, director of the Centre for Arab and Islamic Studies at Australian National University, said it appeared the coup had been mounted by a substantial group from within the Turkish military but that did not mean it would succeed.

He warned there could still be more bloodshed following President Tayyip Erdogan’s call for his supporters to take to the streets.

“Whether this coup succeeds or fails, it clearly signals that Turkey has entered a more unstable and insecure situation,” he told Sky News.

“That really comes on top of the conflict in neighbouring states, particularly Syria and Iraq and that can only add to the further destabilisation and insecurity right across the region.”

US private-sector intelligence firm Stratfor said there were indications the coup had been mounted by followers of US-based Islamic scholar and preacher Fethullah Gulen within the military.

The Gulen movement is long established and influential in Turkey but relations with the government became strained and from 2014 it faced purges to curb its influence, including within the military.

“In essence, an Islamist faction within the military that has deeply alienated the secular strongmen within the armed forces is the one leading the challenge against Erdogan,” Stratfor said in an analysis released on Saturday.

It said the coup attempt was already starting to fray.

“Its chances of failing are high because a polarising faction is leading it,” Stratfor said.