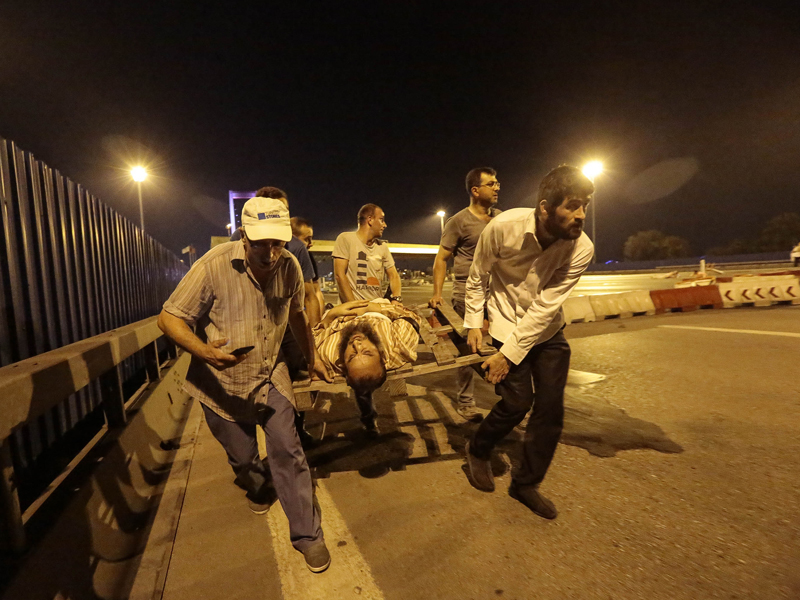 State-run Anadolu Agency reports that 17 police officers had been killed in a helicopter attack on special forces headquarters on the outskirts of Ankara.

The agency also says Turkish air force planes are flying above Ankara to strike at military helicopters that are being used by those attempting a coup.

Broadcaster NTV has reported F-16 jets have brought down a Sikorsky helicopter, but didn’t provide any details.

NTV also showed what it said were images from a police station in Istanbul, showing military officers allegedly detained by police.

Meanwhile, the commander of Turkey’s military special forces, General Zekai Aksakalli, said “those who are attempting a coup will not succeed”.

He told NTV television by telephone: “Our people should know that we will overcome this… We are in control of the situation.”

He said some deaths and injuries were reported during the coup attempt, without providing any details.

The Australian government is monitoring the unfolding drama in Turkey, with the priority being the safety of Australian citizens.

Foreign Minister Julie Bishop said she had spoken with Ambassador James Larsen in Turkey to assess what was happening in the highly fluid situation.

“Our priority is the safety of Australian citizens in Turkey,” she said.

“Australians in Turkey should be vigilant, monitor media, follow the direction of local authorities and advise friends and family in Australia that they are safe.”

Ms Bishop said travel advice for Turkey had been updated to reflect the unfolding developments although the overall level of advice had not changed.

For Turkey generally, the advice is to exercise a high degree of caution and to reconsider travelling to the capital Ankara or to Istanbul.

Ms Bishop said those in Australia concerned about friends of family in Turkey should first try to contact them directly.

Matildas will be keen to forget 7-0 drubbing by Spain
Upcoming stats will reveal where and how hard rates are hitting economy
Victorian MPs pocket a tidy 2.75 per cent pay raise
Reserve Bank review isn’t a ‘get the governor’ exercise: Jim Chalmers
‘Violence for weeks’ feared after landmark US abortion ruling
Aussie Hannah Green within striking distance of Women’s PGA Championship lead
Mayhem on streets as President urges protest
Today's Stories