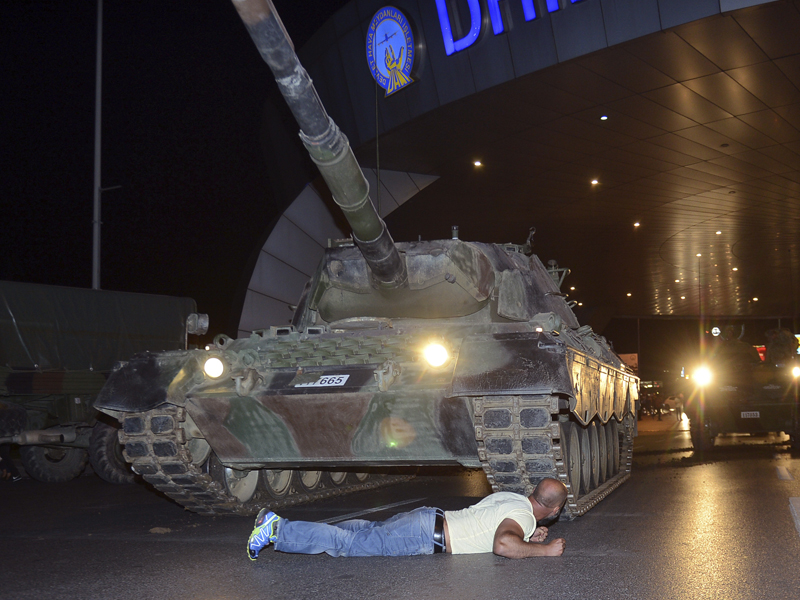 Unarmed civilians have risen up in their thousands to help the Turkish government defeat an attempted coup by heavily armed elements of the country’s military.

Gunfire and explosions rocked both the main city Istanbul and capital Ankara in a chaotic night that also saw jets buzzing overhead, but by the early hours of Saturday (local time) there were indications the coup had crumbled.

A Turkish official said 1563 members of the armed forces had been detained, with 29 colonels and five generals removed from their posts.

Earlier, about 50 soldiers involved in the coup surrendered on one of the bridges across the Bosphorus in Istanbul, abandoning their tanks with their hands raised in the air, live footage on CNN Turk showed.

A witness earlier saw dozens of other pro-coup soldiers surrendering to armed police after being surrounded in Istanbul’s central Taksim square.

CNN Turk reported the Justice Minister as saying 336 people had been detained.

It also said Turkish authorities had shot down a military helicopter firing on the offices of state satellite operator Turksat.

An official with the presidency said Turkish army F-16s had launched air strikes against tanks stationed by coup backers outside the presidential palace in Ankara.

The official added that a military helicopter, which was involved in an attack against a Turkish satellite operator earlier, had been downed in the Golbasi district of Ankara.

A senior Turkish official said 60 people had died during the attempted coup.

He placed the blame on supporters of his one-time ally, US-based Turkish cleric Fethullah Gulen, in defiant remarks after flying back to Istanbul.

“What is being perpetrated is a treason and a rebellion. They will pay a heavy price for this act of treason,” Mr Erdogan said at Istanbul’s airport.

“We will not leave our country to occupiers.”

Overnight, Turkish troops claimed they had seized power but Mr Erdogan vowed the attempted coup would be put down as crowds answered his call to defy a curfew order, taking to the streets to support him.

“We will overcome this,” Mr Erdogan said, speaking on a video call to a mobile phone held up to the camera by an announcer on the Turkish sister station of CNN.

He called on his followers to take to the streets to defend his government and said the coup plotters would pay a heavy price.

“I urge the Turkish people to convene at public squares and airports. I never believed in a power higher than the power of the people,” Mr Erdogan said.

An official said Mr Erdogan was speaking from Marmaris on the Turkish coast where he was on holiday. A Turkish official later said Mr Erdogan’s plane had landed in Istanbul.

As the night wore on, crowds appeared to be answering Mr Erdogan’s call to take to the streets, defying orders by the coup leaders to stay indoors.

“We have a Prime Minister, we have a chief of command, we’re not going to leave this country to degenerates,” shouted one man, as groups of government supporters climbed onto a tank near Istanbul’s Ataturk airport.

Warplanes and helicopters roared over Ankara and Reuters reporters said they saw a helicopter open fire. State news agency Anadolu said military helicopters had fired on the headquarters of the intelligence agency.

Journalists saw tanks open fire near the parliament building in Ankara, which they had surrounded.

Anadolu later said a bomb hit the building. Smoke rose up from nearby, witnesses said. An opposition MP said parliament was hit three times and that people had been wounded.

Turkish broadcaster CNN Turk also appeared to be up and running again, after earlier being stormed by military.

Prime Minister Binali Yildirim and other senior officials said the elected government remained in office. Mr Yildirim and other officials blamed loyalists of US-based cleric Fethullah Gulen, an influential cleric in self-imposed exile who once supported Mr Erdogan but became a nemisis, for the coup attempt but his movement denied any part in it.

The event could destabilise a pivotal country in the region

If successful, the overthrow of Mr Erdogan, who has ruled Turkey since 2003, would mark one of the biggest shifts in the Middle East in years, transforming one of the most important United States allies while war rages on its border. If it fails, the coup attempt could still destabilise a pivotal country in the region.

The US declared its backing for the Government. Secretary of State John Kerry said he phoned the Turkish Foreign Minister and emphasised “absolute support for Turkey’s democratically elected, civilian Government and democratic institutions”.

In the first hours of the coup attempt, airports were shut, access to internet social media sites was cut off, and troops sealed off the two bridges over the Bosphorus in Istanbul, one of which was still lit up in red, white and blue in solidarity with victims of the truck attack in France the previous day.

An announcer read a statement on the orders of the military that accused the Government of eroding the democratic and secular rule of law.

The country would be run by a “peace council” that would ensure the safety of the population, the statement said.

Shortly afterwards, TRT went off the air. It resumed broadcasting in the early hours of Saturday (local time).

Anadolu said the chief of Turkey’s military staff was among people taken “hostage” in the capital Ankara. Mr Yildirim later said he was back in control.

But Mr Erdogan later told media he did not know the whereabouts of his Turkish army chief.

CNN Turk also reported hostages were being held at the military headquarters.

Mr Yildirim said a group within Turkey’s military had attempted to overthrow the Government and security forces were called in to “do what is necessary”.

“Some people illegally undertook an illegal action outside of the chain of command,” Mr Yildirim said in comments broadcast by private channel NTV.