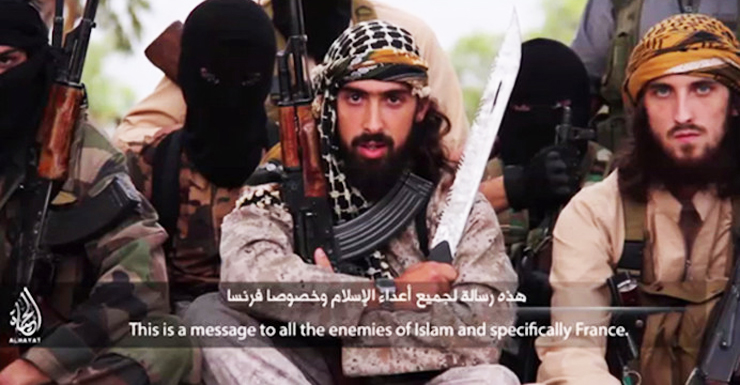 France is a prime target for Islamic State and its affiliates.

It is seen as the antithesis of a good Islamic society, a centre of licentiousness, pleasure seeking, prostitution and sexual perversity, a state that defies the will of Allah and celebrates secular philosophies. A central feature of French culture has been a disdain for organised religion.

There are unconfirmed reports IS has claimed credit for the Nice attacks that killed more than 80 people on Friday, which brings this hatred back into sharp focus.

• Terror in Nice: attacker a French Tunisian
• ‘I saw bodies flying in the air like skittles’
• The ‘dreadful simplicity’ of vehicle attacks
• Names and faces of victims emerge
• ‘All of France under threat’: Hollande

More than 10,000 French soldiers are fighting in conflicts against Muslim fundamentalists.

“The French must die by the thousands,” Islamic State propaganda has previously declared.

The country has a large and aggrieved Muslim population numbering more than six million. Historically it has treated much of Muslim North Africa as its own backyard, colonising Algeria in 1830 and taking control of Lebanon and Syria after World War One.

The moment police in Nice, France fired into the cab of the truck.

The France of today is extremely vulnerable to suicide attacks, with French authorities acknowledging they are overwhelmed.

Dr Tobias Feakin, national security director at the Australian Strategic Policy Institute, told The New Daily the fact that France was one of the main countries fighting jihadists in Northern and Western Africa, Iraq and Syia made it a target.

“France has a very, very large Muslim community which feels that policy is being made against Muslims,” Dr Feakin said.

“There is anger over banning the wearing of the burqa. There is no doubting that there are serious tensions between Muslim population in France and the broader society.

“It is also far easier than Australia to obtain explosives or high calibre machine guns. There has been a flow of weaponry from Libya and the Balkans flowing into Europe and into France.”

Mr Feakin said the Islamic State did not need to secret themselves amongst the refugees flooding into Europe. Many were born in France and had French passports.

“The combination of the government policy of trying to take the fight to Islamists and extremist groups, a large minority who are feeling disillusioned with the French state, the ability to procure arms and access to the ideology of ISIS and other associated groups has led to the targeting of France, and we have seen this repeatedly.”

Terror expert Dr Clarke Jones, a research fellow at the Australian National University, said the French attack, if proven to be linked to IS, could be a sign of desperation.

“You have a weakening of the Islamic State and a call to their followers to grab anything they could to attack the unbelievers,” Dr Jones said.

“This is another example of those who support the ideology doing something. You have a fairly large aggrieved Muslim population with all sorts of perceived inequalities within the population.

“It is the demographics within France that creates the potential for more of these sorts of attacks. As tragic as this is, I don’t think Nice is the last attack we will see.

“You have to look at the social situation of marginalised small populations. There is certainly a situation of inequality. You have a Muslim population of 60 per cent plus within the prison system and that reflects how Muslims are seen in the society and the perceived bias in the criminal justice system.”

News emerged this week that a number of inmates were bashed at the Goulburn’s maximum security prison for refusing to convert to Islam. The prison complex now has its own Middle Eastern prison yard. Other Australian jails are struggling with similar issues.

“It doesn’t matter how much security, when you have a population rusting away on the inside, unless you address those grievances there will be a lot more to come.”

Terror expert Professor Greg Barton at Deakin University told The New Daily more than 2,000 French Muslims had gone to fight in Syria and Iraq and were returning with instructions to carry out attacks.

“The numbers are such that authorities have difficulty dealing with them,” Prof Barton said.

“These are mostly young French citizens who can quite easily come and go on their own legitimate travel documents. The French authorities have thousands they have to pay attention to and it is not possible to track all of them at once.”