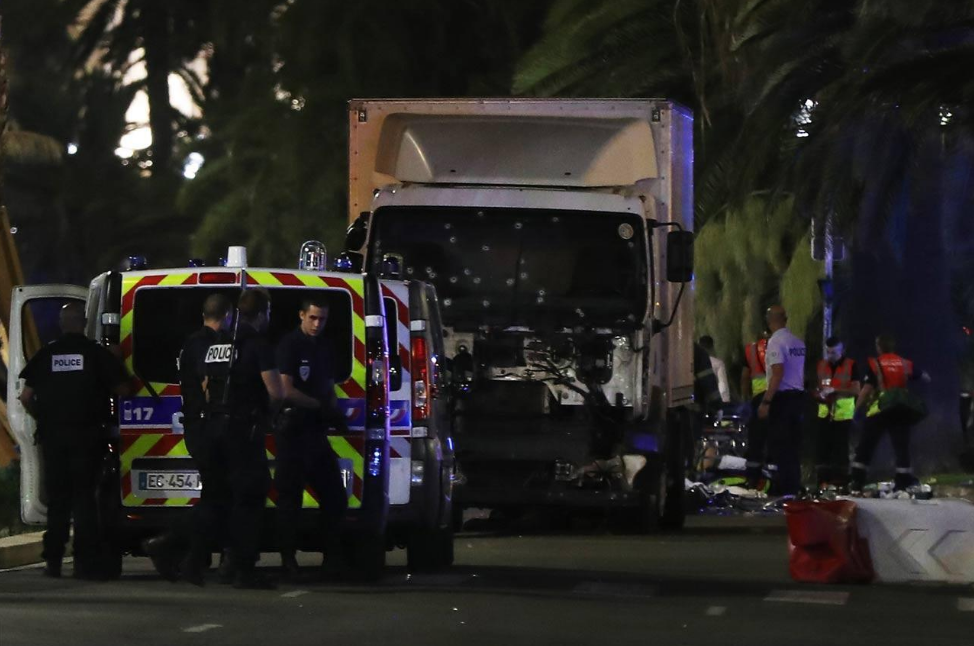 French authorities have confirmed that as many as 84 people have been killed, with 18 critically injured and 31 seriously injured, after a truck crashed into a crowd celebrating Bastille Day in the southern city of Nice.

The man who drove the heavy truck into a crowd in Nice was a 31 year-old French citizen born in Tunisia, a police source says. The man was not on the watch list of French intelligence services, but was known to police in connection with common law crimes such as theft and violence, the source said.

His ID card was found in the truck after he was killed in a shootout with police at the scene.

He is also said to have fired into the crowd with a handgun as he drove along, news agency AFP reports. News reports said several of the casualties had suffered gunshot wounds or were crushed in the stampede.

The suspect also had rifles or shotguns and grenades in the cab of the rented vehicle, but those appeared to be fake, according to news broadcaster BFMTV.

The attack seems so far to be the work of a lone assailant. Police were working to establish what accomplices he may have had in a city with a reputation for Islamist activism.

There has been no claim of responsibility for the attack.

The truck reportedly drove at high speed more than 100 metres before hitting the mass of spectators, sub-prefect Sebastien Humbert told France Infos radio. One report said the truck continued for another 2km before coming to stop.

French president Francois Hollande said France had been hit by a terrorist attack on its national day, “the 14th of July, the symbol of freedom”.

“Nice is now hit. It’s all of France which is under the threat of Islamic terrorism,” he said. “In these circumstances, we must show absolute vigilance.

“Nothing will make us give up in our will to fight terrorism. And we will reinforce in our actions in Syria and Iraq and we will continue to hit those who attack us on our soil in their homes.”

Mr Hollande announced France’s state of emergency, which was to end on 26 July, will be extended by three months.

Local paper Nice Matin has reported that the driver was a 31-year-old Tunisian-born Nice resident.

Watch the moments before the truck’s deadly run:

The French police anti-terrorist unit has taken over the investigation, after the earlier description of a “criminal attack” was confirmed as an act of terrorism. While Islamic State (IS) has not claimed responsibility, IS supporters have taken to social media to hail the attack.

Eye witnesses have described a scene of carnage with bodies and limbs strewn across the world-famous promenade.

A photo on social media showed a truck riddled with bullet holes in its windscreen. Several firearms, explosives and grenades were found inside the truck.

An AFP reporter described seeing a white van driving at high speed onto the famed Promenade des Anglais as people were leaving after the fireworks display.

Horrible pictures coming in from #Nice #France reports suggest firefight btwn driver and sec forces after the attack pic.twitter.com/jaYb93wv2D

“We saw people hit and bits of debris flying around,” he said, adding that the incident took place near the city’s famed Hotel Negresco. Terrified pedestrians screamed as they fled the area. “It was absolute chaos,” he said.

ABC producer David Coady was at the scene, and said he “joined throngs of people” running away from the promenade.

“Saw a truck amongst people when the screaming started. About 50m away,” he tweeted. “People were tripping over in the commotion, there was a lot of panic,” he told ABC News 24.

“People were trying to get into hotels, any businesses that were open, trying to take shelter, because it was unclear what was happening. “With each bang that we heard behind us, people perhaps started to go a bit faster, people were tripping over, it was a very chaotic scene.”

Witnesses also described hearing gunfire, but this was not immediately confirmed by the authorities.

Pro-ISIS supporters are celebrating the attack and promoting the use of the “Nice Attack” hashtag, but IS is yet to claim responsibility.