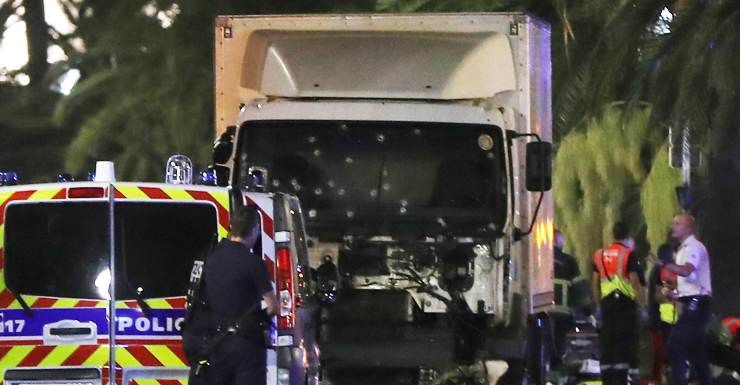 Vehicular attacks like the one perpetrated in France on Friday are an increasingly deadly tactic used by terror groups across the world, experts warn.

A truck ploughed, seemingly deliberately, into a crowd watching fireworks in the French city of Nice and continued driving for 2 kilometres, with some reports saying the driver zig-zagged through the crowd to maximise the damage.

Such a large vehicle moving at speed is difficult to stop and has a devastating impact on crowds of pedestrians, as proven by the rising death toll of 80 and more than 100 injured. Its use as a weapon is difficult to predict and prevent.

• ‘All of France under threat’: Hollande
• ‘I saw bodies flying in the air like skittles’
• Names and faces of victims emerge
• Why IS terrorists are targeting France
• Terror in Nice: attacker a French Tunisian

Some reports in the hours after the attack described the use of vehicles as something new. Sadly, this is not the case.

Former Australian Federal Police officer Dr Mark Briskey, now a counter-terrorism expert at Curtin University, told The New Daily the appeal of vehicle attacks to terrorists is their “dreadful simplicity”. He noted the tactic is “nothing new”, as vehicles have been used as weapons in many countries over many decades.

But another expert, Australian Strategic Policy Institute counter-terrorism expert Jacinta Carrolle, warned that the tactic, while well known to the Middle East and Africa, is a “relatively new” and rising threat to the Western world — especially because two major terror groups have started distributing guides to followers in online magazines.

“We’ve certainly seen since 2013 that Al-Qaeda and Islamic State have both provided detailed direction on how to use vehicles for attacks, whether they’re just plain vehicles or weaponised vehicles,” Ms Carrolle told The New Daily.

“This is done so their followers can use that direction to put together their own attacks. So as we look at something of this type of vehicular attack, there is certainly a lot of incentive, motivation and information out there.”

The expert noted that ramming is relatively ineffective compared to explosives, but is very easy to prepare — and serves the principal aim of propaganda.

Indeed, a global call for violence against “the spiteful and filthy French” and other Westerners issued by terror group Islamic State in 2014 specifically mentioned the use of vehicles.

“If you are not able to find an IED [makeshift bomb] or a bullet, then single out the disbelieving American, Frenchman, or any of their allies. Smash his head with a rock, or slaughter him with a knife, or run him over with your car, or throw him down from a high place, or choke him, or poison him,” IS spokesman Abu Mohammad al-Adnani al-Shami wrote in a statement at the time.

The director-general of France’s internal security agency, Patrick Calvar, warned the French parliament in May of his fear that IS would change its tactics increasingly to include “booby-trapped vehicles”. He said the use of vehicles would allow IS to significantly intensify the impact of its attacks, such as the Paris attacks in the Bataclan theatre and at the Stade de France in November.

The FBI warned in 2010 that the use of vehicles by terrorists to ram targets was an increasing threat and that the tactic “offers terrorists with limited access to explosives or weapons an opportunity to conduct a Homeland attack with minimal prior training or experience”.

As is obvious from the list of vehicular attacks below, cars are used more often than large vehicles, like trucks, as ramming weapons.

26 June 2015
Attacker uses vehicle to break through locked gates of factory in Saint-Quentin-Fallavier near Lyon before detonating bomb, injuring two.

23 December 2014
Van driven into shoppers at a Christmas market in Nantes, injuring 10.

21 December 2014
Car runs over and wounds 11 pedestrians in five areas of the city of Dijon over five hours.

2 May 2016
Car rams and wounds three Israeli civilians near Dolev settlement in the West Bank.

13 February 2016
Car rams four border police outside a military base near Ma’ale Adumum in the West Bank.

29 August 2011
Attacker steals taxi and rams it into police checkpoint guarding popular nightclub in Tel Aviv, before exiting the vehicle and inflicting stab wounds on nine.

4 August 2014
Tractor drives over pedestrians and rams bus, killing one and injuring five.

2 July 2008
Front-end loader smashes into vehicles and pedestrians in Jerusalem, killing three and wounding at least 30.

30 August 2006
Car strikes 18 pedestrians, killing one, during a rampage across several streets of San Francisco.

3 March 2006
Car rams into and injures nine people on the campus of the University of North Carolina.

22 May 2013
British soldier Lee Rigby is run down by a car then stabbed to death.

30 June 2007
A jeep loaded with propane gas cannisters smashes through glass doors of a terminal at Glasgow airport and is set ablaze, injuring five.

20 October 2014
Car rams two Canadian soldiers in Quebec, killing one and injuring the other.

The ‘dreadful simplicity’ of vehicle attacks