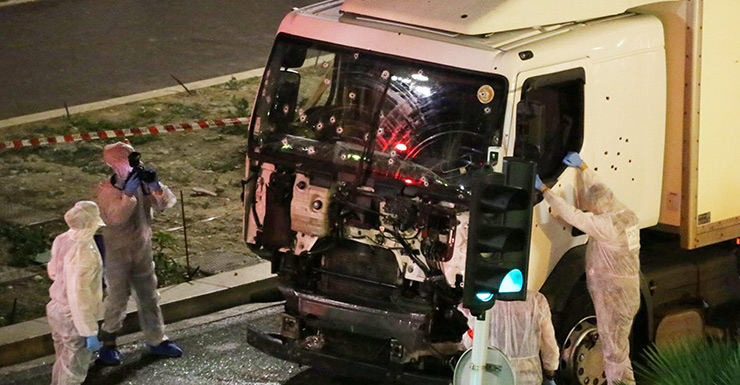 France is confronting another bloody and violent attack which killed more than 80 innocent people, but the nation stands defiant, saying the atrocities will not weaken its resolve to fight terror on home soil and elsewhere.

As the sun rose to reveal the full extent of the carnage on the streets of Nice, French police were searching the home of the prime suspect in an assault that left 84 people dead and another 18 critically injured.

The gunman, at the wheel of a semi-trailer, ploughed through a crowd celebrating Bastille Day in what President Francois Hollande called a terrorist act.

“It is all of France which is under the threat of Islamic terrorism. So in these circumstances we must show absolute vigilance and a determination without end,” said Mr Hollande.

• Terror in Nice: Attacker a French Tunisian
• ‘I saw bodies flying in the air like skittles’
• The ‘dreadful simplicity’ of vehicle attacks
• Names and faces of victims emerge
• Why IS terrorists are targeting France

The attacker, identified by French police sources as 31-year-old Mohamed Lahouaiej Bouhlel, was not known by the Tunisian authorities to hold radical or Islamist views, the sources said.

Bouhlel was married with three children, they said. The sources did not say when he had last been resident in Tunisia, a former French colony.

Interior Minister Bernard Cazeneuve said 18 of the injured were in a critical condition after the 25-tonne truck zigzagged along the seafront Promenade des Anglais as a fireworks display marking the French national day ended just after 10.30pm local time.

The attack, which came eight months and a day after Islamic State gunmen and suicide bombers struck Paris on a festive Friday evening, seemed so far to be the work of a lone assailant.

Officials said hundreds were hurt as the driver wove along the seafront, knocking them down “like skittles”. A local government official said weapons and grenades were found inside the unmarked articulated truck.

Dawn broke on Friday with the pavements smeared by dried blood, while smashed children’s strollers, an uneaten baguette and other debris were strewn about the Mediterranean seaside promenade. Small areas were screened off at regular intervals.

What appeared to be bodies covered in blankets were visible through the gaps.

The scene appeared to confirm what one city official said during the night – that the truck drove a full 2km along the promenade after mounting the kerb.

‘I saw people go down’

The truck, a rental vehicle according to local officials, was still were it came to rest, its windscreen riddled with bullets.

Police were trying to establish whether the driver might have had any accomplices in a city with a reputation for Islamist activism. There had been no claim of responsibility on Friday morning.

The truck careered into families and friends listening to an orchestra or strolling above the beach towards the grand, century-old Hotel Negresco.

Jacques, who runs Le Queenie restaurant on the seafront, told the station: “People went down like ninepins.”

Bystander Franck Sidoli, who was visibly shocked, said: “I saw people go down.”

“Then the truck stopped, we were just five metres away. A woman was there, she lost her son. Her son was on the ground, bleeding,” he told Reuters at the scene.

At Nice’s Pasteur hospital, medical staff were treating large numbers of injuries. Waiting for friends who were being operated on, 20-year-old Fanny told Reuters she had been lucky.

“We were all very happy, ready to celebrate all night long,” she said. “I saw a truck driving into the pedestrian area, going very fast and zig-zagging.

“The truck pushed me to the side. When I opened my eyes I saw faces I didn’t know and started asking for help … Some of my friends were not so lucky. They are having operations as we speak. It’s very hard, it’s all very traumatic.”

An attack on liberty

Francoise Hollande said in a pre-dawn address that he was calling up military and police reservists to relieve forces worn out by a state of emergency begun after the militant group killed 130 people in the French capital in November.

Only hours earlier Hollande had announced the state of emergency would be lifted by the end of July, but the president said that following the attack, in which several children were killed, it would now be extended by a further three months.

“France is filled with sadness by this new tragedy,” he said.

Hollande called the tragedy on the day that France marks the 1789 revolutionary storming of the Bastille prison in Paris as an attack on liberty by fanatics who despised human rights.

France would, nonetheless, continue its air operations against Islamic States in Syria and Iraq.

In a message of support to the French people Australian Prime Minister Malcolm Turnbull said “Our nations are united in freedom’s cause today, just as we were a hundred years ago.”

Australians caught in the horror

Alex Mahoney from Sydney described running desperately for the beach as a truck pushed through the crowd behind her.

“All of a sudden I start hearing all this screaming, so I turn around and look back at people running,” Ms Mahoney told 9NEWS.

“I see a truck pushing through the crowd of people and 50, 100 metres behind me and quickly coming towards me. So we all just ran towards the beach.”

Journalist Ben Terry ran from gunfire and stayed in a restaurant storage room with 15 or so others.

“We didn’t see it but we saw the panic and then we heard the gunshots and that’s when the worst fears, I guess, were kind of confirmed and we got out of there as quickly as we [could] and hid. …

“People were kind of coming and going during it, the few people in tears, others desperately trying to reach family members or other loved ones, friends, that they might have been separated from.

“We were in there for around about half an hour, which was difficult because we didn’t actually know what was going on at all. …

Adelaide woman Evie Timetheo was on the promenade when the attack took place and told radio station 5AA the scene was chaotic: “People started screaming, there was a loud thud, I could hear gunshots, we just ran into our hotel, because everyone just dispersed.”

“We brought in about 10 people from the street and they’re currently in our hotel room, and it’s just mayhem,” he told ABC news.

“We just locked the doors, we got the people in here, we don’t know what’s happening.

“We heard the loud noises and thought, ‘Oh, someone’s backfired.’

“But from what we understand that was the police firing into the truck, to shoot these people in the truck that were ramming the crowd.”

‘All of France is under threat’: nation reels after Bastille Day atrocity