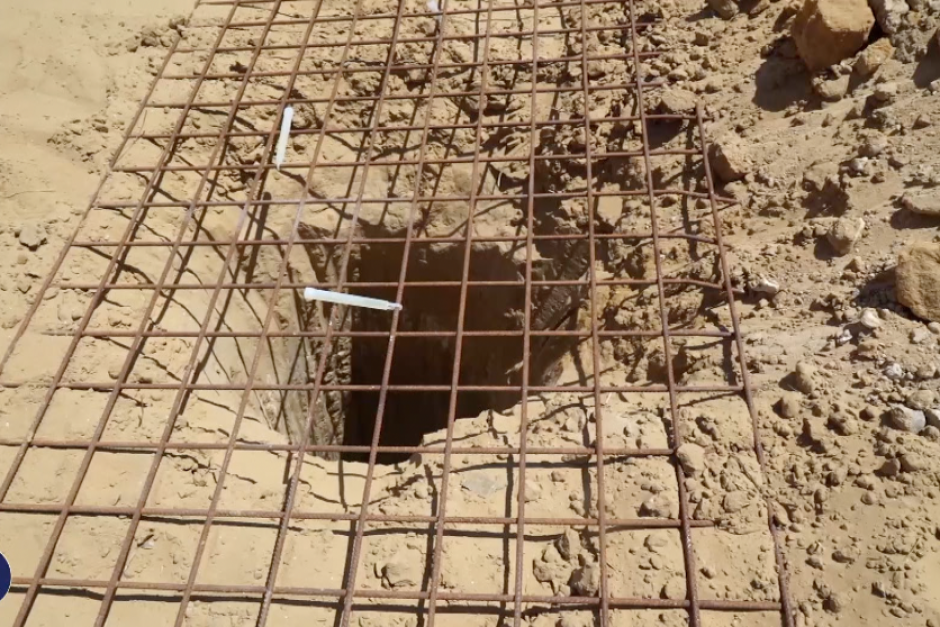 It has been two years since the July 2014 Gaza War, which killed over 2000 Palestinians and 70 Israelis.

Since then an uneasy truce between the Israel Defence Force (IDF) and the militant Hamas group, which runs the strip, has largely held. But in the past few months tensions have been rising.

Numerous tunnels built by Hamas that run from the besieged territory to inside Israel have been discovered, creating fears that preparations for another war have began.

Israeli mother Yael Lachyani, 39, stands on the edge of her kibbutz and peers over to the border of the Gaza Strip, just 1 kilometre away.

“Less than 300 metres from where we are standing at the moment, five soldiers were killed when the terrorists came out from this tunnel,” she tells the ABC.

Tunnels built by Hamas into Israel are not new. They were used during the 2014 war to attack Israeli military positions, and many were destroyed.

But in the past few months at least two new tunnels have been found just near Ms Lachyani’s kibbutz, Nahal Oz, where she lives with her husband and three small children.

Looking out at the border towards Gaza, she says most of the time she prefers not to think about the tunnels.

The tunnels stretch for kilometres back inside Gaza and the aim is clear – to kidnap or kill Israeli targets.

Ms Lachyani says psychologically it is more terrifying than rockets being fired towards Israel.

“We don’t know how to deal with the situation.”

The IDF has released video of their troops digging up and destroying Hamas tunnels that reach well into Israel, some of them at depths of 40 metres under the surface.

“The scenario of terrorists coming out of the ground into a backyard of somebody – that is something which is not a dream, it’s a possibility and that’s something we need to be prepared for,” says Lieutenant Colonel Peter Lerner, the spokesperson for the IDF.

He says the tunnels are now a priority for Israel’s forces.

“As we speak we have engineers on the ground,” he says.

“We have intelligence that is operating and combining those capabilities together with technology helping us seek out and find these tunnels that pose a substantial threat.”

Inside the Hamas-run Gaza Strip, the tunnels are an open secret, but people are fearful of discussing them.

“Yes of course, this is a real sensitive subject, no one can talk about it,” says 28-year-old Ramzi Herallah.

A social worker and journalist, he been jailed by Hamas after criticising the militant group’s rebuilding efforts.

Thousands of Gazans remain homeless in the impoverished territory after Israel destroyed or damaged nearly 100,000 homes during the 2014 war and the UN has warned of a growing humanitarian crisis there.

“It’s annoying when people have no money and we know lots is spent on tunnels,” Herallah says.

“But at least the tunnels are for the defence of the people.”

In a poor, run-down neighbourhood still littered with destroyed buildings on the outskirts of Gaza is 50-year-old Sabah.

She’s adamant Hamas should keep building tunnels despite the fact it cost her the life of her 23-year-old son.

Her son was a member of the Hamas Al Qassam militant fighters. In January he was underground working on building a new tunnel when it collapsed and he died.

Sabah says you can’t compare the tunnels to Israel’s warplanes and advanced missiles that killed many of the more than 500 Palestinian children who died during the 2014 war.

“If there was no occupation, our children won’t do such a thing,” Sabah tells the ABC.

“Our young men don’t have any other way to resist the occupation and to defend ourselves.”