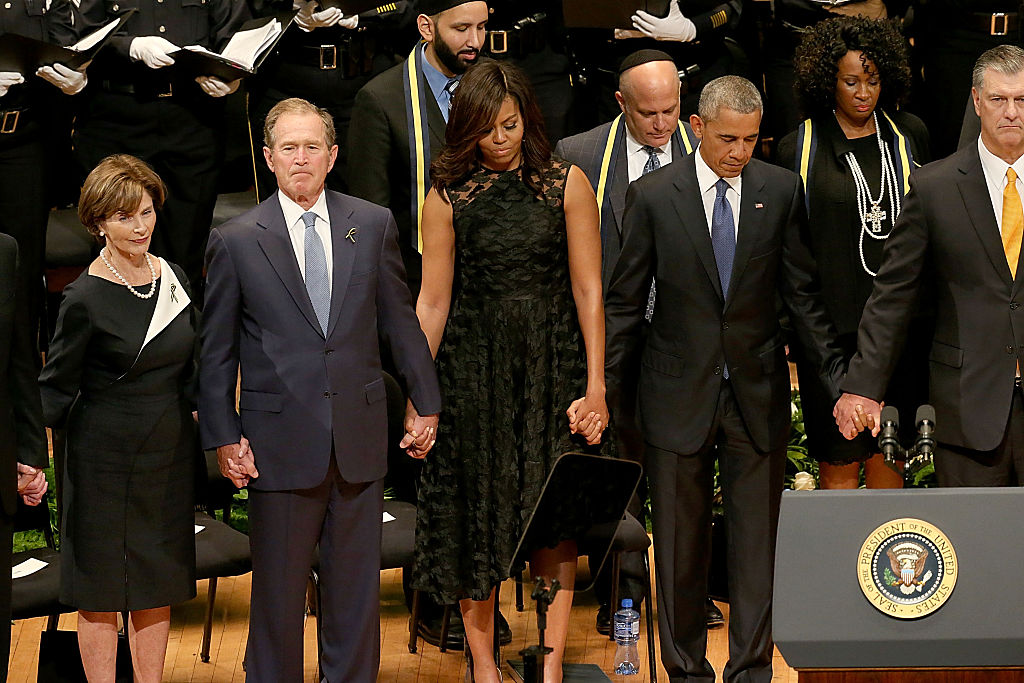 Former US president George W Bush’s jovial dance to a hymn at a Dallas memorial for the five police officers slain in last week’s shooting has raised eyebrows.

Mr Bush was holding hands with his wife Laura and first lady Michelle Obama when he began to sway energetically from side to side during a choir rendition of The Battle Hymn of the Republic.

• Sydney to Melbourne in two hours: it will happen
• Threats, violence: Van Badham’s week of abuse

On social media, some questioned whether the dance was appropriate for the solemn occasion.

“And look at George Bush … bobbin (sic) and weevin (sic) to the music like he’s at a square dance … show some respect,” wrote Twitter user @PatNation15.

But others were approving of the behaviour.

“If we can all just dance like George W Bush, America will be just fine,” tweeted @GospelChopsCEO.

Meanwhile, Mr Bush’s speech at the memorial was much more favourably received online, with some preferring it to the one given by President Barack Obama.

“With their deaths, we have lost so much. We are grief stricken, heartbroken and forever grateful,” he said.

“At our best, we practice empathy, imagining ourselves in the lives and circumstances of others.

“This is the bridge across our nation’s deepest divisions.”

One of the suspected snipers behind the deadly rampage is 25-year-old military veteran Micah Johnson.

Seven other police officers and two civilians were also wounded in the shooting.