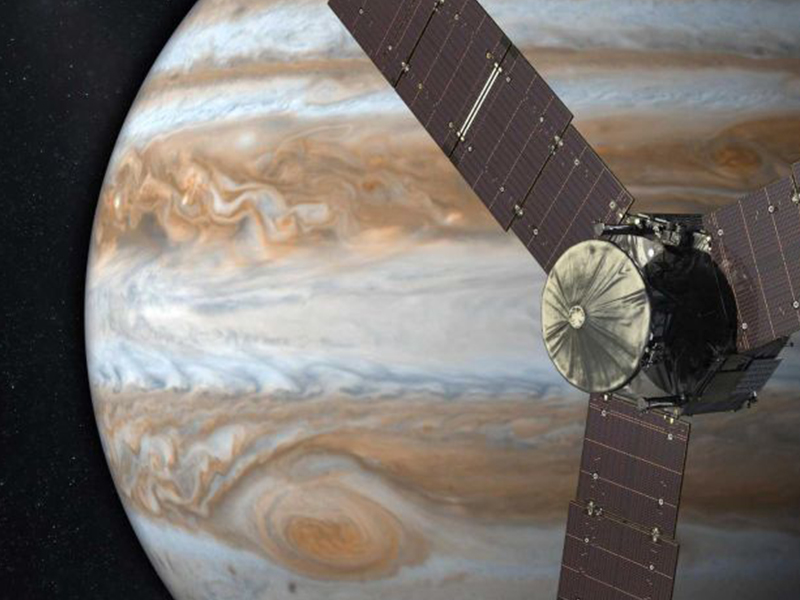 NASA’s Juno spacecraft has sent back its first images of Jupiter since successfully placing itself into the orbit of the mammoth planet.

The billion-dollar spacecraft completed the first hurdle of its mission to shed light on the solar system’s largest planet on July 5 (Australian time).

Its camera was turned on six days later and the spacecraft has since then been busy capturing and sending data and images back to Earth.

Its first photo was comprised from images taken on July 11, when the spacecraft was 4.3 million kilometres from Jupiter.

While blurry, you can clearly spot the atmospheric features on the planet, including its famous Great Red Spot – a huge swirling storm which has raged on Jupiter for over 300 years.

Three of the planet’s largest moons – lo, Europa and Ganymede – are also visible.

“This scene from JunoCam indicates it survived its first pass through Jupiter’s extreme radiation environment without any degradation and is ready to take on Jupiter,” principal investigator Scott Bolton said in a statement.

But Mr Bolton said researchers did not expect to see any high-resolution images until August 27, when Juno will make its closest encounter.

“We can’t wait to see the first view of Jupiter’s poles,” his statement read.

Over the course of the 53-day mission Juno will pass the face of the planet a total of 37 times, getting as close as 4700km.

It is hoped the mission will reveal how the planet was formed and, in turn, how the Earth and the rest of the solar system was developed.