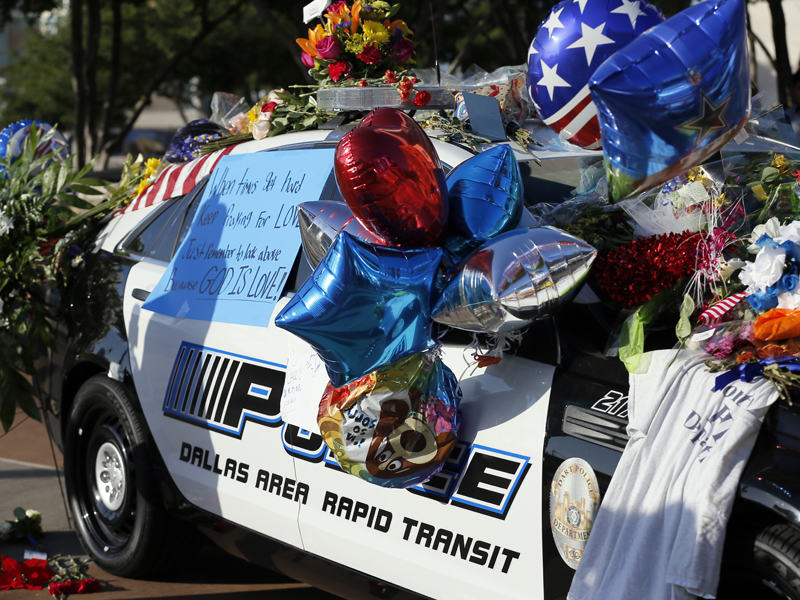 The NSW Police Force says it stands “shoulder-to-shoulder” with its Dallas colleagues who are mourning the loss of five officers killed in gunfire during a protest against police brutality towards black men.

Acting NSW Police Commissioner David Hudson said the tragedy on Friday is a reminder of the dangers that confront police when they are doing their duty.

“The circumstances those officers found themselves in was dreadful – a premeditated ambush that cannot be justified in any civilised society,” he said.

Here’s what we know about the Dallas tragedy so far:

* Just before 9pm on Thursday (noon Friday AEST) a sniper opened fire at the end of a protest by the Black Lives Matter movement in Dallas.

* Officers fought back with handguns against what investigators believe was a single shooter with automatic weapons.

* After an hours-long gunfight, police sent a robot to detonate a bomb in the parking garage where the suspect had holed up, killing him.

WHO CARRIED OUT THE ATTACK?

* The dead suspect was identified as Micah Xavier Johnson, 25, a black former US Army reservist who was deployed to Afghanistan in 2013-2014.

* Johnson told negotiators he acted alone, and investigators now believe that to be the case.* Authorities are investigating if there were any co-conspirators.

WHO ARE THE VICTIMS?

* Three other DART officers and four Dallas police officers were wounded in the attack. Two civilians were also shot, and one was undergoing surgery for a bullet wound to the leg.

WHAT MOTIVATED THE ATTACK?

* Police say Johnson said he wanted to kill “white people, especially white police officers” and was angry about police killings of two black men in other parts of the country and the Black Lives Matter movement.

* It is unclear whether he had any ties to that movement or any other, and whether there were other factors involved.

WHAT IS BLACK LIVES MATTER?

* Black Lives Matter is a US protest movement that alleges that US police officers are prone to using excessive violence against African Americans.

* Its Thursday protest was in response to what activists characterised as unjustified killings by police of two black men this week in other parts of the country.

* The shootings have once again highlighted America’s entrenched problems with race, gun violence and the intersections of the two.

* “All I know is this must stop. This divisiveness between our police and our citizens,” Dallas police chief David Brown said.

* Political leaders including US President Barack Obama condemned the killings but remained split on action to take on guns, with Obama and Democratic leaders calling for a debate on gun reforms and Republicans, so far, not budging on their support of gun rights.

* Democratic Representative GK Butterfield, chair of the Congressional Black Caucus, said if Congress failed to act on gun violence and alleged police abuse of blacks, “it will be a long, hot summer”.

Dallas tragedy: the story so far