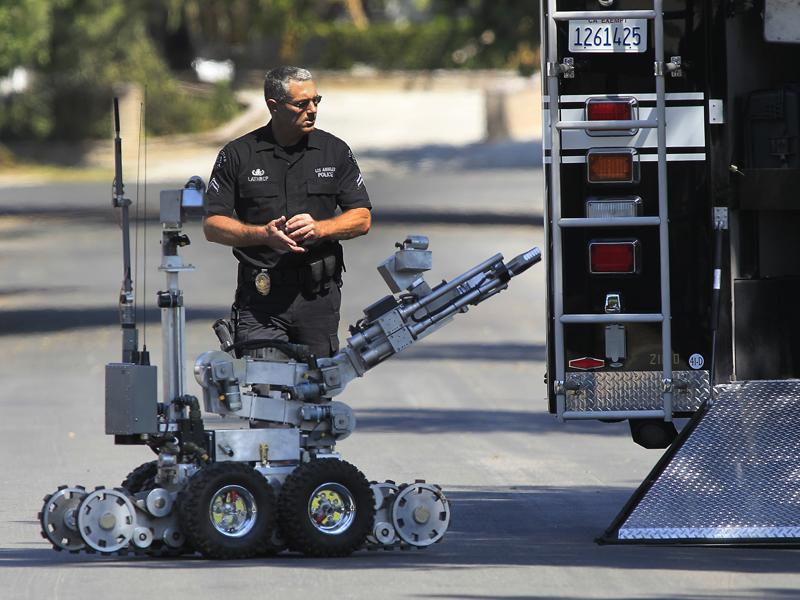 Dallas police used a robot similar to the one pictured. Photo: Getty

US police ended a stand-off with a gunman in Dallas by remotely detonating a “bomb robot”, a move that has rekindled concerns about the militarisation of law enforcement.

The bomb blast killed a black US army reservist identified by authorities as Micah Xavier Johnson. Johnson is believed to be responsible for shooting dead five police officers and wounding seven others during an ambush on a peaceful protest in Dallas on Thursday night, held to condemn police shootings of black men.

Technology warfare experts said the use of a robot to kill someone had major technological and legal implications for 21st century policing.

“It’s a first by police,” said Peter Singer, author of Wired for War, a book on the use of robots in conflict zones.

Singer said he knew of examples of the US military in Iraq “jury-rigging a surveillance bot to take out an insurgent down an alley”.

“We saw no other option but to use our bomb robot and place a device on its extension for it to detonate where the suspect was,” said Dallas Police Chief David Brown on Friday.

“Other options would have exposed officers to grave danger.”

Dallas Mayor Mike Rawlings said the gunman was given a choice of surrendering without harm or remaining in place and he chose to remain in place.

It was not clear exactly why the police chose to use a bomb rather than some other means of subduing Johnson.

It was also unclear whether police had trained in the use of the “bomb robot” or whether it was improvised.

The exact nature of the explosive used was also not immediately known.

The Dallas Police Department did not respond to requests for comment.

The Department owns at least three “bomb robots,” according to an October 2015 report by the city.

The vendor for those devices is Remotec, a subsidiary of defence contractor Northrop Grumman Corp that specialises in manufacturing remotely operated robotic vehicles.

Remotec’s website includes product descriptions of a handful of its unmanned vehicles, such as the F6B, described as the “most versatile, heavy-duty robot on the market” and the Wolverine, a “workhorse robot that won’t quit until you do”.

Such devices are often used by law enforcement to dispose of or detonate bombs without risking human life.

The Pentagon has distributed at least 451 bomb defusing robots to federal and local police agencies through its excess-inventory program since 2005, according to a review of Defense Department records.

A tally by the Drone Center at Bard College in New York showed that more than 200 federal, state and local law enforcement agencies now possess at least one explosive ordnance robot acquired through the surplus program.

The transfer of military equipment to civilian police agencies under what is known as the 1033 program came under scrutiny following the police shooting of Michael Brown in Ferguson, Missouri, in August 2014.

Protests in Ferguson were monitored and at times disrupted by heavily armed police, whose use of armoured vehicles and other high-powered military gear alarmed many observers.

In the aftermath, President Barack Obama issued an executive order scaling back the program.

The Pentagon now cannot distribute certain types of armoured vehicles and other equipment, while police must demonstrate why they need unmanned drones, aircraft or certain types of riot gear.

Bomb robot killing of alleged sniper ‘a first for police’