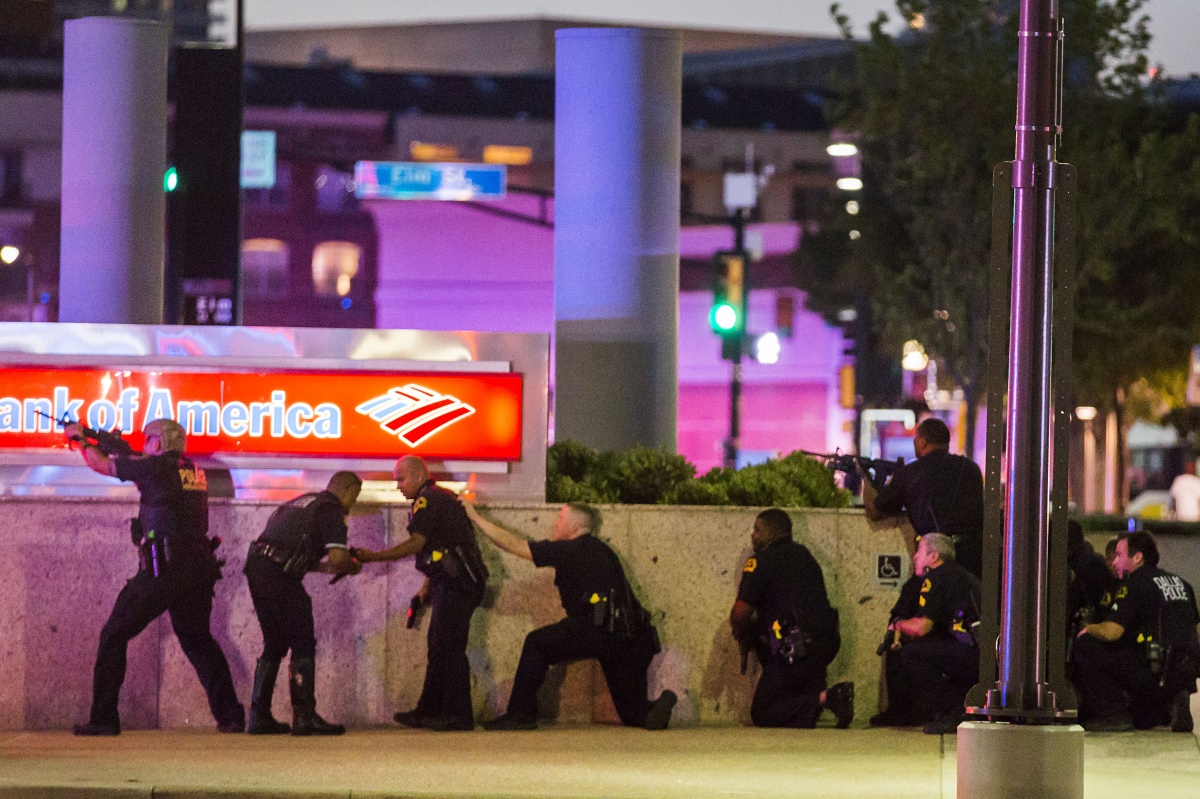 One of the suspects behind the sniper killing of five police officers in Dallas told negotiators he “wanted to kill white people”, especially white police officers, the city’s police chief says.

The gunman also said he was not affiliated with any other groups and acted alone, Chief David Brown told reporters during a press conference.

The suspect, who had engaged in a shoot-out for 45 minutes with police during a Black Lives Matter protest on Friday in the Texan city, was eventually killed by a bomb police sent in via robot.

US media identified the shooter as 25-year-old Micah Johnson, a black resident of a Dallas suburb who reportedly served in the US Army Reserves until last year — he had no prior criminal record, or ties to extremist groups, the reports said.

But officials have so far only described the suspect as “male”.

“The suspect said he was upset at white people … he wanted to kill white people, especially police officers.”

The rally was one of a number held across the US in response to two fatal police shootings of black men, in Minnesota and Louisiana, this week.

Five police officers were shot and killed and seven more injured when snipers in an elevated position opened fire in the city’s downtown area.

Some of the officers targeted were traffic police and were not wearing Kevlar body armour as they wanted to avoid presenting an aggressive posture at what was supposed to be a peaceful protest.

Some officers were “ambushed” and shot, some in the back, Chief Brown said.

“He was saying he was going to take everybody out,” Mayor Rawlings said. “He threatened other bombs and we felt that was the safest way to get in and it was.”

Mayor Rawlings added that an unspecified number of suspects in custody — including one black woman — were “not being real cooperative.”

Johnson had reportedly fired at police, and claimed to have planted pipe bombs throughout the city.

A suspicious package was recovered by the Dallas bomb squad and was being investigated.

It has been a devastating night. We are sad to report a fifth officer has died.

US television station KDFW TV reported that shots were fired during demonstrations at Belo Garden Park in Dallas.

Airspace above Dallas had been restricted to emergency services only, on what was reportedly the worst day for US law enforcement since the 9/11 attacks.

The gunfire broke out around 8.45pm Thursday (local time).

US horrified over attack: Obama

US President Obama has expressed his condolences to the people of Dallas after five police officers were killed and another six wounded by snipers.

In a brief statement on Friday, Obama said the investigation into the shooting continues but “what we do know is there has been a vicious, calculated and despicable attack on law enforcement”.

Obama called the shooters motives “twisted” and vowed they would be brought to justice.

“There’s no possible justification for these kinds of attacks or any violence against law enforcement,” Obama said, noting that he had spoken with Dallas Mayor Mike Rawlings and offered his support and condolences.

Obama spoke from Warsaw, Poland, where he is meeting with NATO and European Union leaders.

Immediately after landing in Warsaw, and before the shootings, Obama had expressed solidarity with protesters earlier. In those comments, he aired his frustration with what he said were racial disparities in the justice system.

He also argued there was no contradiction between supporting law enforcement and working to see that biases in the criminal justice system are rooted out.

“We also know that when people are armed with powerful weapons, unfortunately, it makes attacks like these more deadly and more tragic. In the days ahead, we are going to have to confront those realities as well,” he said.

Scores of police and security officers were on hand. Officers and other people hunched behind cars outside a parking garage.

Officers with guns drawn were running near and into the parking garage as police searched for the shooter.

“We lost touch with two of our friends just trying to get out of there.”

Carlos Harris, who lives downtown, told the newspaper that the shooters “were strategic”.

On Wednesday, a Minnesota officer fatally shot Philando Castile while he was in a car with a woman and a child.

The aftermath of the shooting was live-streamed in a widely shared Facebook video.

A day earlier, Alton Sterling was shot in Louisiana after being pinned to the pavement by two white officers. That, too, was captured on video.

Conservative commentator and former congressman Joe Walsh was under pressure for a Tweet in which he declared “war” and told President Obama to “watch out”.

Walsh deleted the tweet shortly after and claimed he wasn’t calling for violence, but believed Black Lives Matter should be categorised as a “hate group”.