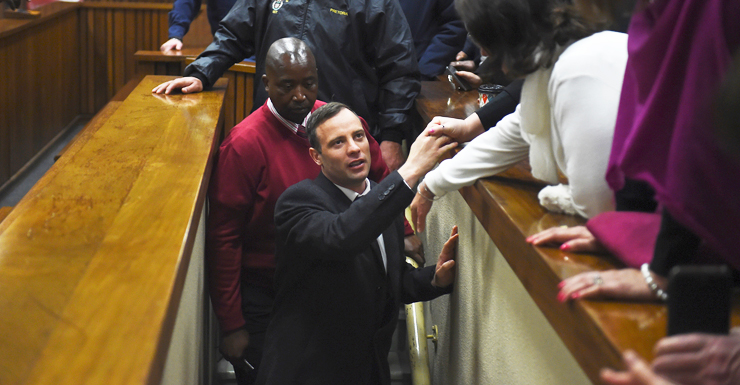 South African Paralympic gold medallist Oscar Pistorius has been re-sentenced to six years in prison for the murder of girlfriend Reeva Steenkamp — only a year more than his original sentence.

“Public opinion may be loud and persistent, but can play no role in this court … I am of the opinion that a long-term sentence will not serve justice in this matter,” Justice Masipa told the court.

It is believed Pistorius will be eligible for parole after three years, and that the 10 months he served in prison for an earlier conviction of manslaughter will be counted towards his new sentence. But this was not confirmed by the judge.

He will serve the sentence in the hospital section of Kgosi Mampuru II prison in Pretoria in order to protect him from attacks by other prisoners.

Pistorius was found guilty of murdering Ms Steenkamp by an appeals court in December 2015.

The upgraded charge followed an appeal by prosecutors against his conviction for culpable homicide (equivalent to manslaughter) in 2014. South African prosecutors originally charged the Olympic athlete with murder in 2013, but Justice Masipa downgraded the conviction to manslaughter, as can be done in all murder trials.

To aid his defence, Pistorius walked on his stumps before the court two weeks ago — drawing gasps from some witnesses. The athlete had the lower part of his legs amputated when he was a baby.

The state said Pistorius had shown no remorse and called, unsuccessfully, for him to receive no less than the minimum 15-year sentence for murder.

Justice Masipa noted during sentencing that Pistorius was convicted of ‘dolus eventualis’ murder, a lesser form of murder, which means he foresaw the possibility of his actions resulting in the death of a person and continued regardless.

In most common law jurisdictions, such as England and Australia, this would probably equate to manslaughter.

Pistorius was on his stumps when he fatally shot Steenkamp four times through a toilet cubicle door at his home in 2013.

He testified at his murder trial that he felt vulnerable and thought an intruder was in the house. Prosecutors have said Pistorius intentionally killed Steenkamp after an argument.

Pistorius was freed from prison in October 2015 after 10 months behind bars. He began serving out the remainder of his term under house arrest at his uncle’s house in a wealthy suburb of the South African capital.

State lawyers described the original sentence as “shockingly light, inappropriate” and said “not enough emphasis was placed on the horrendous manner” in which she died.

Before the murder, Oscar Pistorius made history by competing and winning medals as a sprinter at both the Olympics and Paralympics. He was dubbed the ‘Blade Runner’ because of the prosthetics he used to run.

Pistorius gets one more year