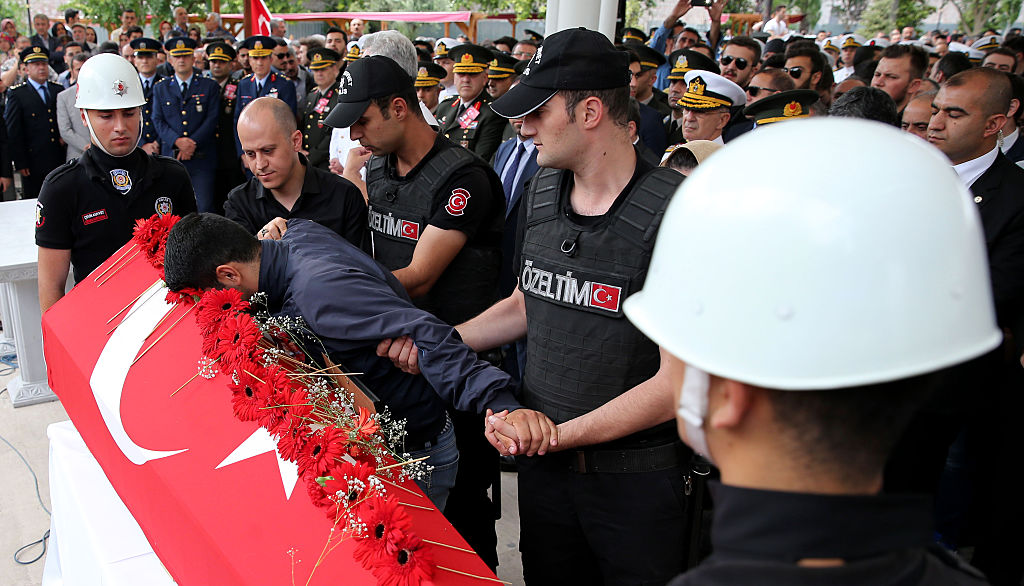 Turkey has blamed Islamic State for a triple suicide bombing and gun attack that has killed 41 people at Istanbul’s Ataturk Airport which Turkish President Tayyip Erdogan has called a turning point in the global fight against terrorism.

In the deadliest attack in a year of bloody suicide bombings in Turkey, the attackers struck the busy airport, a symbol of Istanbul’s role as the Muslim world’s most open and cosmopolitan city, a crossroads between Europe and Asia.

Three bombers opened fire to create panic outside the airport on Tuesday night, before two of them got inside and blew themselves up.

Two hundred and thirty-nine people were wounded, officials said, giving a full account of the bloodshed.

One blew himself up in the departures hall, a second in arrivals, and the third outside.

“Our thoughts on those responsible for the attack lean towards Islamic State,” he told a news conference in the capital Ankara, adding that investigations should be completed in the coming days and the identities of the bombers revealed.

John Brennan, head of the CIA in Washington, also said the attack bore the hallmarks of Islamic State “depravity”.

“The despicable attacks in Istanbul International Airport yesterday that killed dozens and injured many more certainly bears the hallmark of ISIL’s depravity,” Mr Brennan said, using an acronym for the IS group.

The IS group typically does not claim responsibility for attacks in Turkey in order to send messages to the government without alienating potential future recruits in the country, Mr Brennan said.

Turkey is part of a US-led military coalition against Islamic State and home to around 3 million refugees from the five year civil war in neighbouring Syria.

Islamic State has established a self-declared caliphate on swathes of both Syria and Iraq and declared war on all non-Muslims and all Muslims who do not accept its ultra-hardline vision of Sunni Islam.

It has claimed responsibility for similar bombing and gun attacks in Belgium and France in the past year.

Erdogan, whose government has taken steps this week to improve relations with Israel and Russia in part to strengthen its hand in fighting against militants, said the attack should serve as a turning point in the global battle against terrorism, which he said had “no regard for faith or values”.

A day after the attack, broken ceiling panels littered the kerb outside the arrivals section of the international terminal.

Plates of glass had shattered, exposing the inside of the building, and electric cables dangled from the ceiling.

Paul Roos, 77, a South African tourist on his way home, said he saw one of the attackers “randomly shooting” in the departures hall from about 50 metres (55 yards) away.

“He was wearing all black. His face was not masked … We ducked behind a counter but I stood up and watched him. Two explosions went off shortly after one another. By that time he had stopped shooting,” Roos told Reuters.

“He turned around and started coming towards us. He was holding his gun inside his jacket. He looked around anxiously to see if anyone was going to stop him and then went down the escalator … We heard some more gunfire and then another explosion, and then it was over.”

The Dogan news agency said autopsies on the three bombers, whose torsos were ripped apart, had been completed and that they may have been foreign nationals. It did not cite its sources.

No group had claimed responsibility, more than a day after the attack.