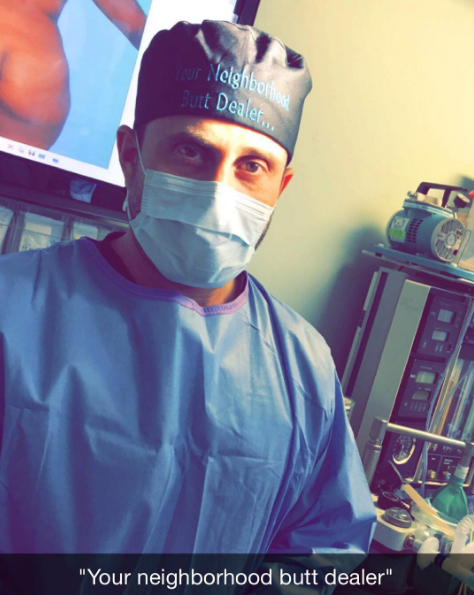 And yes, it is as gory as it sounds.

From Brazilian butt lifts to tummy tucks, labiaplasty to boob jobs and all the bloody messes in between, the graphic details are on full display.

• Sexist ads about to go down the Tube
• Ghee whizz: gull in curry, avoids induced korma
• When the boss catches you sleeping on the job

Moral philosopher at The Ethics Centre, Matthew Beard said the issue of surgeons sharing photographs of their patients was “clearly problematic” from an ethical standpoint.

However there’s obviously a demand for the service, with stomach-turning photos and videos being shared with millions of willing observers.

What is Snapchat? Click the owl to find out:

The self-proclaimed first ever Snapchat surgeon, Michael Salzhauer, better known as @therealdrmiami on the app, attracts over 800,000 daily views for his 10-second video snippets.

Since his first snap in February 2015, fellow practitioners have jumped on the bandwagon, with the majority focussing on its potential educational element.

“The primary purpose of this Snapchat account is for education,” Dr Matthew Schulman claimed in one of his Snapchat stories.

His videos include graphic imagery showing nipples being snipped off, rear ends inflated with bright red fat, noses broken with a chisel and cartilage shaped into smiley faces, all done while night club music rages in the background.

According to ethicist Matthew Beard, “Dr Miami” takes things a step too far.

“The act itself is clearly problematic from an ethical perspective you don’t need to break that down too much to see there’s something wrong with that,” Mr Beard said.

“What concerns me most is that almost the light-heartedness and the cavalierness of it makes it worse.”

Even if the patients had consented to the transmission of the images, the practice would still be wrong from an ethical standpoint, Mr Beard said.

“It’s a fine line drawing distinction between what is a matter of ethics and a situation where a patient is being treated in a way that is undignified and failing to respect their humanity and their basic dignity,” he said.

“Those distinctions will be hard to draw and certainly where those things are happening without consent, we could say without question that those are ethical issues.

“Where they are happening with consent, it doesn’t mean they’ve got a clean slate ethically speaking, there may still be problems.

“It’s a dangerous precedent to set when someone is doing something that is either a matter of personal ethics, or in a way that we find distasteful.”

He told the New York Post that live-streaming surgery was inappropriate and pushed ethical boundaries.

“That’s why we don’t let family members or friends into the (operating room). If you let everyone in, that is going to compromise your judgment. You are also adding things to the operating room not ideal for optimum sterility.

“There is no question that some physicians using Snapchat are being unprofessional and lack integrity based on their behaviour.”

There’s also an issue as to what the patient gave consent to and if the surgeons stick to an to the unconscious wishes of the patient.

The New Daily has chosen not to republish any of the more gruesome images produced by the surgeons.