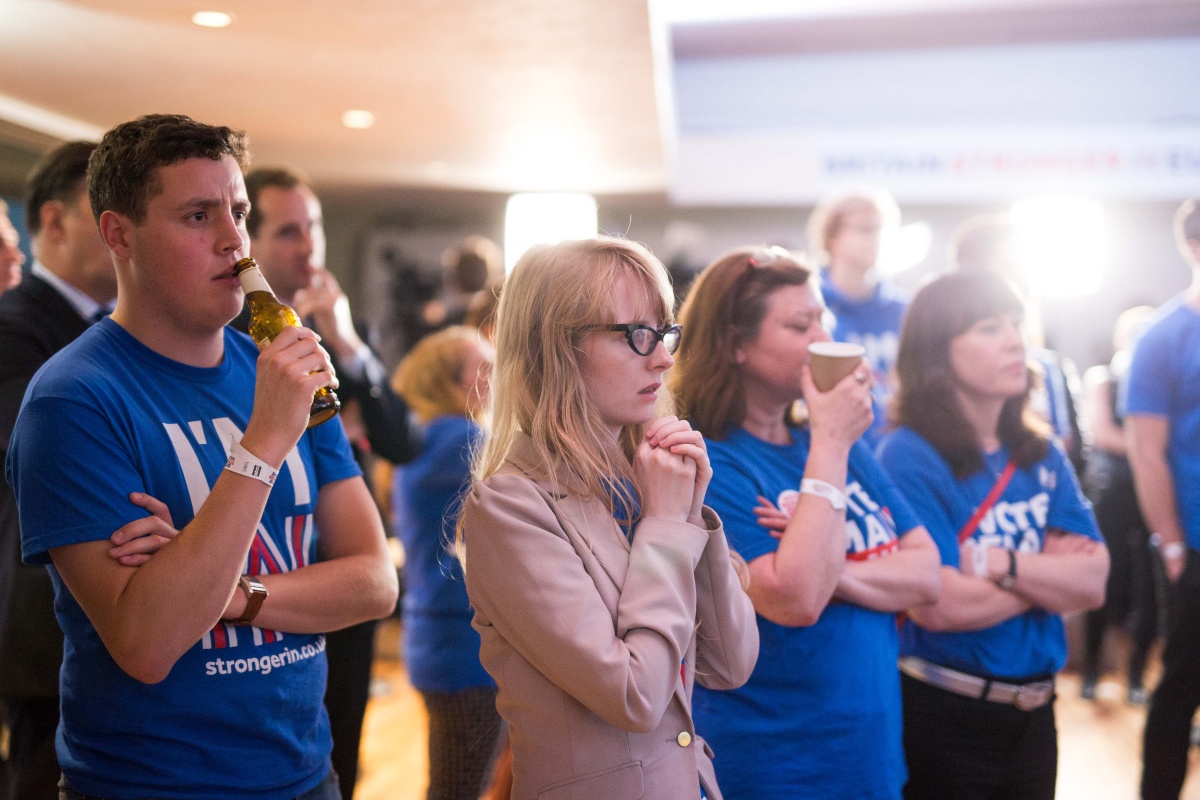 Referendum day was characterised by an atmosphere of rebellion. The morning after, it was replaced with shock.

Britons awoke to a huge stock market dive and a drop in the value of the pound that hadn’t been seen in 30 years. Analysts say the UK must brace for a series of hits to its economy, leaving those who rushed to the polls to ask for a “Brexit” wondering how high a price they might pay to achieve their ultimate goal.

Opposite the Houses of Parliament, politicians and journalists scurried about on Saturday (Australian time) while members of the public stood behind the rope, absorbing the scene and wondering what on earth had just taken place.

Charles Lee was with teenage students all wearing Union Jack hats but not celebrating.

“It’s insane, insane,” he said. “Totally unexpected. I cannot believe so many people can be so stupid. There’s huge uncertainty now. Who knows what the future holds?”

Now, what exactly have we done?

While leaders of the campaign to quit Europe are celebrating victory, there is now shock that many Britons may not even know what they had actually voted for.

The pre-vote campaign generated massive media coverage and was marked by ruthless attempts from both sides to garner support, but it has become apparent many Britons simply weren’t paying attention.

They were not only in the dark about the ramifications of staying in or leaving the European Union, many seemed oblivious to what the EU was.

It wasn’t until after the vote that many Brits began Googling: “What is the EU?”

Eight hours after the close of polling, Google searches asking “what happens if we leave the EU” more than tripled.

There was a sharp increase in searches concerning the ballot and the implications of the vote.

A woman interviewed by ITV News confessed: “Even though I voted to leave, this morning I woke up and I just — the reality did actually hit me.

“If I’d had the opportunity to vote again, it would be to stay.”

Near the Houses of Parliament, a cyclist rode up to a group of “out” voters and started shouting.

“Shame, shame on all of you. Look what you’ve done,” he said. His impromptu anger seemed to surprise even him.

“I didn’t plan to say any of this. But I have,” he said before riding off.

Young British people who voted to remain part of the European Union have expressed their feelings of betrayal and disappointment at the referendum result, using the hashtag #NotInMyName.

According to YouGov polling data, 75 per cent of 18- to 24-year olds voted to remain in the EU — compared to the 52 per cent of all Britons who voted to leave in the referendum.

A parliamentary petition calling for a second referendum has already gained more than 500,000 signatures — and caused the House of Commons website to periodically crash.

The petition calls on the British Government “to implement a rule that if the remain or leave vote is less than 60 per cent based a turnout less than 75 per cent there should be another referendum”.

The Brexit referendum had a turnout of 72 per cent.

The UK Parliament considers all petitions with more than 100,000 signatures.

Malcolm Turnbull is urging voters to back the Coalition to ensure economic stability in the wake of the Brexit shock, but the Opposition Leader insists the Prime Minister is a weak man held hostage by a dysfunctional party.

He encouraged voters to back the relative stability of the Labor Party.

Both men led divided governments, were forced into national votes they didn’t want by the right-wing of their parties, he said, referring to Mr Turnbull’s proposed plebiscite on same-sex marriage, which he initially opposed when Tony Abbott was still PM.

“Poor old Mr Turnbull, he knows that this marriage equality plebiscite is not the right way to go.

“He is a weak man beholden to the right wing of his party.”

Mr Turnbull said he wouldn’t be stooping to Mr Shorten’s personal attacks, but insisted a vote for Labor, Greens or independents would mean chaos and instability.

Britain’s decision was a big economic shock that would hinder the global economic recovery, creating risk and uncertainty.

“It is more important than ever to ensure that we choose on July 2 a stable Coalition majority government with a clear national economic plan,” he said.

Brexit regret: ‘I can’t believe so many people can be so stupid’