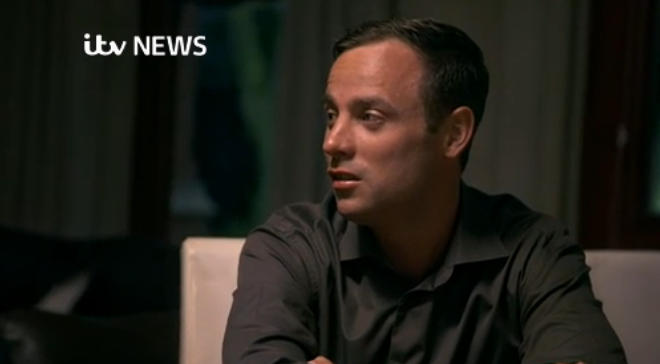 In his first interview since murdering Reeva Steenkamp, an emotional Oscar Pistorius has claimed his slain girlfriend would not want him living behind bars.

Pistorius was convicted of murdering Steenkamp on Valentine’s Day 2013, despite claiming he thought she was an intruder.

The former Olympic and Paralympic sprinter was sentenced to five years in jail for manslaughter before an appeal saw the court convict him of murder.

Pistorius’ new sentence is yet to be revealed, but the minimum sentence for murder in South Africa is 15 years.

In the interview, which airs in the UK on Friday, Pistorius continued to deny the murder charge and claimed Steenkamp would want him out of jail so he could help the less fortunate.

The athlete also said he deserved a lengthy sentence and would not argue with those who wish a life sentence him.

‘I didn’t murder her’

Despite being convicted by the South African court, Pistorius continued to deny he murdered Steenkamp.

In the interview, he gave the same version of events that saw him criticised by his original judge as “evasive” and “clearly not candid”.

Pistorius said he had arrived home to find his girlfriend cooking him a meal for Valentine’s Day, and the pair had enjoyed a nice evening before he awoke to a noise coming from the bathroom.

He said he used the gun on his bedside table to shoot four times through the bathroom door, believing Steenkamp was either still in bed or hiding on the floor.

“At that point I knew I had killed her, I knew she was dead. I went down onto my knees and pulled her onto me.”

Pistorius said the court had never proved that he killed Steenkamp intentionally and maintained that the murder was not premeditated.

“At times I don’t feel like I should have the right to live for taking someone else’s life. What’s difficult is dealing with the charge of murder,” he said.

‘She would want me to live my life’

In contrast to the victim’s family, Pistorius said he didn’t believe Steenkamp would want him spending his days in jail.

“If I was afforded the opportunity of redemption I would like to help the less fortunate like I had in my past,” he said.

“I would like to believe that if Reeva could look down upon me that she would want me to live that life.”

Pistorius said he would like to be able to help people – something he feels he can’t do if he is “sitting around” in jail.

The former champion was also asked why he owned between nine and 11 guns, and had ordered a semi-automatic assault rifle.

“I don’t know anybody in South Africa that hasn’t experienced some form of crime,” he said, before claiming a number of family members had been carjacked or robbed at gunpoint.

Pistorius’ sentence will be handed down on July 6.

Steenkamp’s family denied a request to take part in the interview.

Pistorius interview: ‘She wouldn’t want me in jail’