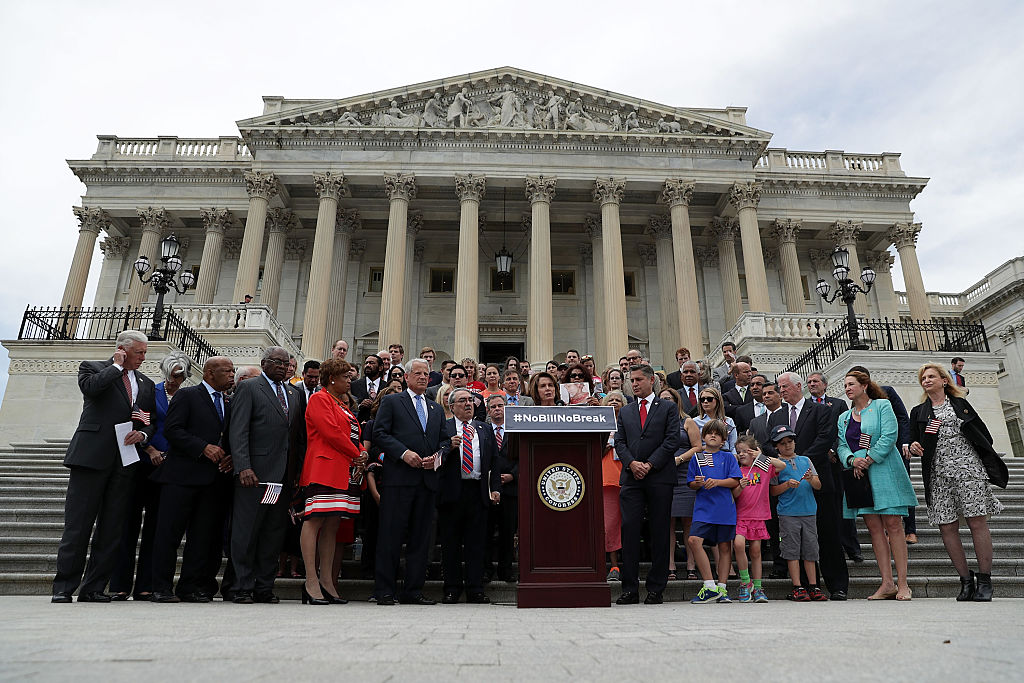 Democrats in the US Congress are refusing to leave the floor of the House of Representatives to try and force a vote on gun-control laws.

Nearly 100 representatives have staged a sit-in, demanding wider background checks and the blocking of gun sales to terror suspects.

The protest won praise from President Barack Obama and presidential hopeful Hillary Clinton in the most recent manoeuvre to persuade Republicans in Congress to adopt gun control after last week’s mass shooting in Orlando.

The legislators chanted “no bill, no break” and sang 1960s protest songs, but Republican Speaker of the House Paul Ryan called it “a publicity stunt” and told CNN that there would be no vote on the matter.

“They know that we will not bring a bill that takes away a person’s constitutionally guaranteed rights without… due process,” he said.

Senators are pushing for a compromise, with top Democratic Senator Harry Reid supporting a Republican proposal.

Mr Reid said he supported new legislation proposed by Republican Senator Susan Collins that would stop gun sales to a limited number of people who are on some terrorism watch lists.

The bill is due to come before the Senate on Thursday.

“We have to occupy the floor of the House until there is action,” said Democratic Congressman John Lewis — a civil rights icon who marched with Reverend Martin Luther King Jr in the 1960s — just before he and dozens of colleagues sat down on the carpeted floor in the well of the chamber, where such disruptive tactics are rare.

The Democrats remained on the House floor, calling for action before a vacation recess scheduled to start at the end of the week and run through July 5.

Even with lights dimmed and microphones turned off, several dozen representatives carried on, with the sit-in entering its fifth hour by 4pm (US time).

Top House Democrat Nancy Pelosi joined the insurgents, then led several from the Congress and gun violence survivors and relatives outside onto the Capitol steps.

“Give us a vote,” she demanded of House Speaker Paul Ryan.

Assistant Democratic Leader James Clyburn likened the push for gun control action to the civil rights movement of the 1960s when sit-ins and other civil disobedience prodded Washington to act on new protections for African-Americans.

Democratic presidential candidate Hillary Clinton also tweeted her support for the sit-in, saying: “This is what real leadership looks like.”

Democrats in the Senate last week took control of that chamber for nearly 15 straight hours as they called for gun control legislation.

Hell no, we won’t go: Senate digs in on gun control