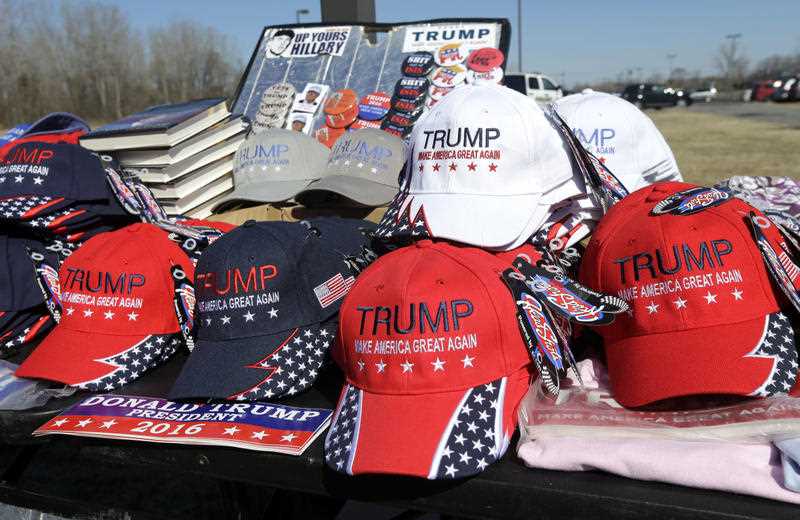 We all know that Barack Obama made history when he became the first African-American to win the US presidency in 2008.

However, Mr Obama was also the first presidential candidate to commercialise US electioneering by charging supporters handsome prices for campaign T-shirts, posters, mugs and general apparel.

Before Mr Obama’s 2008 campaign harvested around $US30 million in sales, the major US parties traditionally gave away posters and mugs and sold items such as T-shirts at cost.

Since then, merchandising has become a universal feature of American election culture and it is now even starting to bleed into the campaigns of the major Australian political parties.

While local political junkies have only a limited range of products to choose from at the online retail shops of the Liberal and Labor parties, Americans can replenish their sports wardrobes with Hillary sweat shirts and tracksuits or deck out their toddlers in Donald Trump-inspired jumpsuits.

Left-wing members of the Democratic Party can even buy pricey artworks promoting the merits of Vermont senator Bernie Sanders.

Most of the paraphernalia seems cringe-worthy and would likely embarrass most Aussies, but in the United States political merchandising has become big business.

Here is The New Daily’s selection of the most kitsch and squirmish lines marketed by US candidates and their parties.

Rally with The Donald for $US335

Mr Trump tries to promote his whacky rallies as family entertainment and supporters can bring the grandparents and kids battle-ready with megaphones, flags, caps, shirts and streamers. For an extra $US18, Mr Trump’s most fervent fans can make sure their toddlers stand out in the crowd with the campaign’s official infant’s jump suit. And for the same price the family dog can be made to play ball, too. Well, her campaign this month released her official “Woman Card” that anyone can buy for $US5. This “statement tank top” that is “designed to break glass ceilings” will set you back $US30. This poster, originally released for Mrs Clinton’s failed campaign in 2008, is still selling for $US30. The product range at the Vermont senator’s online store indicates they might be right.

There are no posters for sale at the store, only “art prints” produced from environmentally friendly soy oils that each fetch $US50.

The prints are part of a series of artworks marketed by the Sanders’ campaign as “The art of a political revolution”. This video advertisement produced by the Republican National Committee probably wins the prize for the most ridiculous marketing in the campaign so far.

These limited edition George H.W. Bush socks cost $US19, but the video seems to suggest it might help young Republicans look the part during courtship.

Peter Dutton touted as next Liberal leader as he claimed victory in Dickson
‘The urgency of the situation’: WHO steps in as monkeypox cases erupt around the world
Volodymyr Zelensky: How war will end as Ukraine ‘breaks backbone’ of Russian army
Jim Chalmers decries Coalition waste as Labor hits the hustings amid downpours in Queensland
Anthony Albanese, Scott Morrison cast their votes in Sydney
Australian aces at French Open out to show there’s life after Ash Barty
‘Horror babysitter’ caught out in viral video
Today's Stories