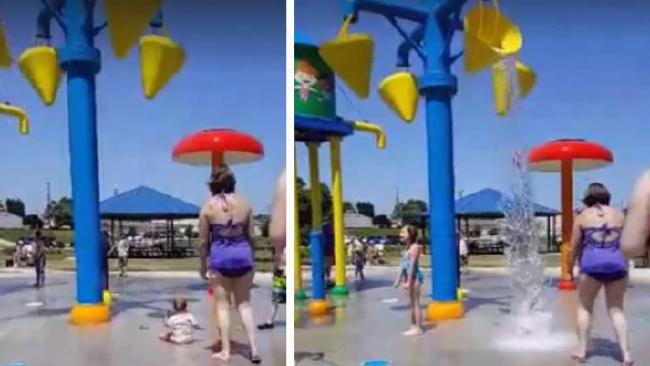 A video of a babysitter letting a baby get dumped by water has gone viral, eventually reaching the child’s horrified mother.

Brittany Dixon was distraught after coming across a short Facebook video showing her daughter Annora having water violently poured over her head while under the watch of her babysitter at a local ‘splash park’.

Another mother, Desiree Howell, had witnessed the seven-month-old being mistreated by her babysitter at the park in Greenwood, Indiana, and was so horrified she decided to film the incident while she waited for police to arrive.

The video, which has since been viewed 1.5 million times, shows baby Annora sitting under a splash area at the park, crying as large buckets of water are dropped on top of her.

Clearly incensed by the incident, Ms Howell posted the video to her personal Facebook account and implored others to share it after police failed to prosecute the woman.

“You have got to be kidding me!!!!! She is abusing this child. Baby is crying. And swallowing this water,” she wrote.

In an update, Ms Howell said the babysitter also forced the child to walk barefoot on hot pavement as the child screamed and cried in pain.

The babysitter also allegedly pushed Annora so high on a swing she almost fell out, and allowed a teenager with them to swear at the seven-month-old.

Thanks to Ms Howell’s video, Annora’s mother was able to confront the babysitter and pursue the incident with police.

She told The Daily Journal it was clear Annora was not old enough to enjoy the ‘water dumper’.

“There is no way she should have been under that,” she said.

“No matter how many times you put her under that bucket of water … she is going to cry every time. She is a baby.”

Ms Dixon said the babysitter did not seem to understand the potential danger.

“She kept trying to talk to me, and I just kept telling her she was in the wrong,” Ms Dixon said.

Angry commenters argued baby Annora easily could have drowned from the water.

“It is maddening to me that this woman could kill that baby by being so ignorant!” wrote one commenter. “Dry drowning is a real thing, and this child could’ve easily being exposed to it!”

Ms Dixon said the case was currently in the hands of investigators.