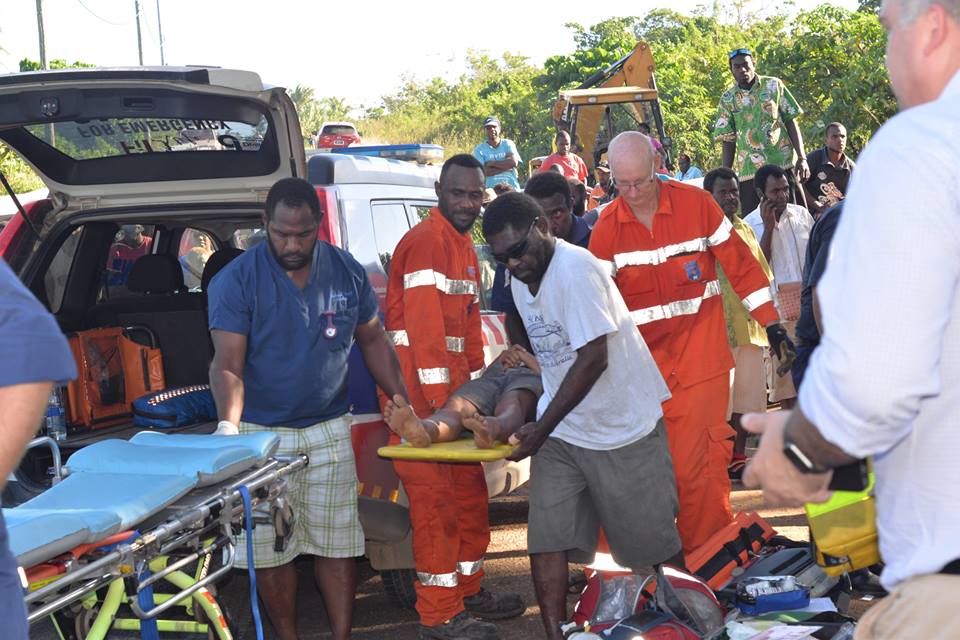 The boy was one of 11 Australians injured when the tour bus crashed head-on into another bus in Vanuatu’s capital Port Vila — an incident which reportedly left three locals dead.

The Australians had docked from the P&O cruise ship Pacific Dawn.

The most seriously injured were airlifted to hospital in New Caledonia at Noumea, while other injured passengers were placed on flights to Brisbane or treated locally.

The chief executive of Carnival Australia, P&O’s parent company, said there was a “fair spread of ages” among the injured.

“There are some older passengers. There are parents and there are children,” Ann Sherry said.

She said the 11-year-old, the most seriously hurt with head injuries, remained in a critical condition but was “conscious and alert”.

The boy, who suffered the worst injuries in the crash, remains in a Noumea hospital with critical head injuries and is not yet stable enough to be evacuated to Australia.

Queensland Ambulance Service supervisor Matthew Green said two of the injured were a husband and wife in their 70s.

A P&O spokesman had earlier put the injury count at 12, but Ms Sherry confirmed that was the total number of tourists on the bus.

Seven patients – a married couple in their 70s, a four-year-old girl and three other women and a man – arrived in Brisbane on Tuesday afternoon and were being cared for across three Brisbane hospitals.

Another air ambulance is due to touch down on Wednesday.

The passengers, among 2,000 on the cruise ship, were part of a small local tour in Vanuatu.

At a press conference, Ms Sherry said Carnival would suspend its working relationship with the tour provider pending an investigation into the crash.

Ms Sherry said she had “no information” to suggest there was any truth to reports the bus driver had been drinking before the crash.

“I think we should wait for the investigation, which I’m sure will be very thorough,” she said.

“We will obviously be reviewing their performance, if they’re found to … not have met our standards, then clearly they won’t be delivering services for us again.

“All the shore tour operators that we use are fully accredited. Those people are required to undertake a risk assessment annually and are required to have sufficient good practice in place to be able to meet our global insurance standards.”

Ms Sherry said the vehicle was equipped with seatbelts but was not sure if all 12 passengers were wearing them.

The ship will continue its voyage and is expected to arrive in Brisbane on Saturday, but will miss one of its stops due to the delay with treating passengers.

“Normally here, you’re pretty safe on the roads because a lot of the road systems are of such poor quality that you just can’t speed,” he told the ABC.

Michael Benjamin, who has worked for six years with charity Promedical Vanuatu and previously worked as a paramedic in Melbourne, said it was the worst crash he had seen in Vanuatu.

“It was a particularly bad scene and particularly complicated due to the number of people we had there,” he said.