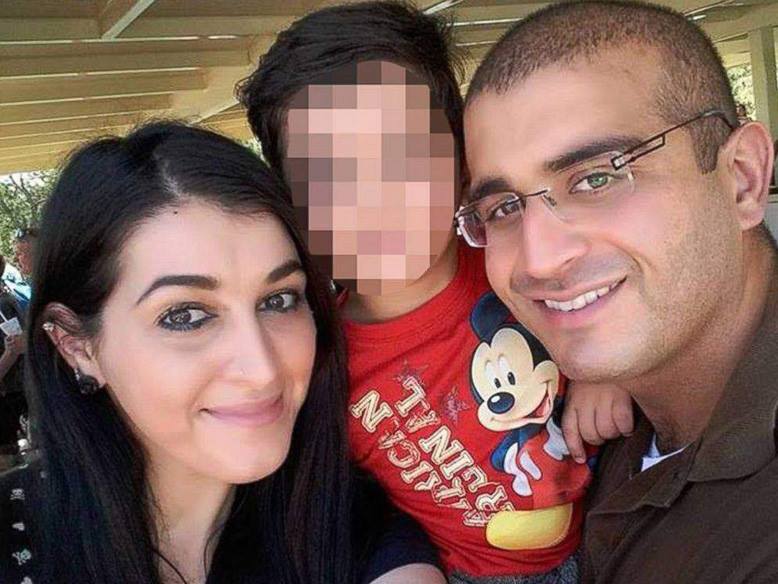 Salman may soon be charged as an accessory to her husband’s 49 murders and 53 attempted murders, the deadliest mass shooting in modern US history, Fox News reported on Wednesday.

There are unconfirmed reports that she knew of her husband’s murderous plans.

Also on Wednesday, sources told New York Daily News that Mateen was a misogynistic, homophobic bully who harboured homicidal fantasies from as young as 10 years old.

Multiple former classmates said Mateen was suspended for threatening to gun down “everyone [he] didn’t like at school”, while a former teacher recalled him bullying one student for being homosexual.

And while authorities turn their attention to any knowledge Mateen’s current wife may have had of his devastating plan, his ex-wife has revealed her family was forced to rescue her from his physically abusive reign.

She said he bullied her and was once suspended for threatening to blow up the school – all before the age of 12.

“He was going to bring a gun to school and threatened to kill everyone he didn’t like,” Ms Hall said.

Her father, Bill Hall, said Mateen’s bullying was severe enough for him to make a complaint to the school.

“I mean, there were [red] flags all over the place about this guy. We weren’t the only ones.

Another classmate, Christopher Diaz, corroborated the gun threat and described Mateen as a loner and “troublemaker” who was dropped to school in a limo by his father.

Former teacher Kathleen Zurish told the news website that Mateen stole from other kids, looked down on women and those with less money than him, and once picked on a boy for being homosexual.

The gunman’s father, Seddique Mateen, was blamed by one of the sources for his violent behaviour.

Mateen senior previously declared himself a “provisional leader” of his birth-country Afghanistan, and posted a bizarre YouTube series in which he warned: “God himself will punish those involved in homosexuality.”

The father has also appeared in Afghani army garb in Facebook photos alongside the national flag, and last year announced his candidacy for the Afghanistan presidency in a YouTube video (despite the presidential race being decided months before).

As Pulse nightclub survivors described the horror of Sunday night, one noted that the younger Mateen ranted about Afghanistan as he shot innocent revellers, screaming that it was punishment for America bombing the country.

But after their wedding, Ms Yusifiy said signs began to emerge that Mateen was “bipolar”, “obviously disturbed” and “deeply, deeply traumatised”.

“A few months after we were married I saw his instability, I saw his bipolar, and he would get mad out of nowhere, and that’s when I started worrying about my safety,” she said during a press conference.

“Then after a few months he started abusing me physically, very often, and not allowing me to speak to my family, and keeping me hostage from them.”

Ms Yusifiy said her family was forced to physically rescue her, and she had not been in contact with Mateen for seven or eight years.