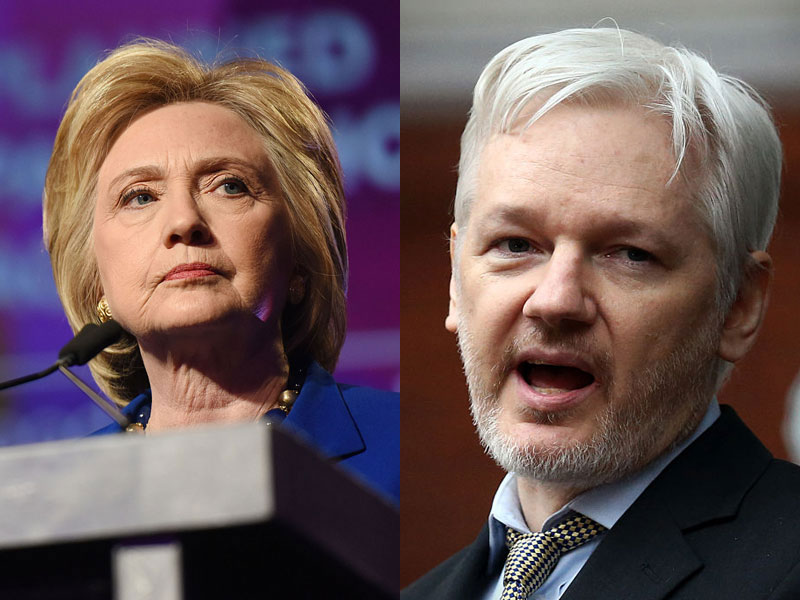 Hillary Clinton’s bid for the White House could soon be dead in the water, after rebel publisher Julian Assange said he will release new details of her use of a personal email account while US secretary of state.

In an interview with British broadcaster ITV this week, Mr Assange said he had acquired more emails relating to Mrs Clinton’s time as secretary of state and other documents relating to the activities of a family charity known as the Clinton Foundation.

Mrs Clinton, the Democratic Party’s presumptive nominee for president, is being investigated by the FBI over whether she violated security laws by using a private email server.

Throughout the first Obama administration, Mrs Clinton used the email account run from a server inside her home to send at least 30,000 emails to staff about state matters. About 60 of those emails were later classified as “secret” or “top secret” by the Department of State.

“We have emails relating to Hillary Clinton, which are pending publication,” Mr Assange told ITV.

“There’s very strong material both in the emails and in relation to the Clinton Foundation – Hillary Clinton has been pushing to prosecute others and so has Barack Obama, who violate these procedures.”

Mr Assange said the documents would soon be published on the Wikileaks website, but gave no indication of their contents.

In the last six months, the website has published more than 30,000 emails after a US federal court ordered the state department to act on a freedom of information request from global news provider, Vice News.

Don’t count out Bernie yet

The growing controversy has the potential to upend Mrs Clinton’s political aspirations and play into the hands of Vermont senator Bernie Sanders.

Although Mrs Clinton would still be eligible under US laws to run for president if she was charged with a criminal offence before the November poll, it is more likely in such a circumstance that the Democrats would confirm Mr Sanders as the nominee at the party’s convention in late July.

Mr Assange’s menacing warning shot to Mrs Clinton comes at a strategic moment in the presidential campaign, with the Republican Party attacking the Clinton Foundation for wasting millions of dollars on aid projects in developing nations.

This week Mr Trump also called on the Foundation to return US$25 million donated by the King of Saudi Arabia, saying it should not accept money from authoritarian regimes that do not respect human rights.

Mr Sanders, who resisted attacking Mrs Clinton over the Foundation throughout the primary race, this week also opened fire over its fundraising activities.

“If you asked me about the Clinton Foundation, do I have a problem when a sitting secretary of state and a foundation run by her husband collects many millions of dollars from foreign governments, governments which are dictatorships … yeah I do,” he told CNN.

Speculation has intensified in the last month that Mr Sanders would pardon Mr Assange if he became president.

US authorities want to prosecute Mr Assange and Wikileaks for the publication of classified defence documents and videos relating to the Iraq War, Afghanistan and the US detention centre at Guantanamo Bay.

Since 2010, Mr Assange has been living as a political refugee in the Ecuadorian embassy in London to avoid arrest.

President Obama and Mrs Clinton have described Wikileaks’ activities as illegal and have pushed for Mr Assange to be made legally accountable for publishing US state secrets.

“The emails we’ve published show that Hillary Clinton is receiving constant updates about my personal situation,” he told ITV.

“She has pushed for the prosecution of Wikileaks which is still in train.

“We do see her as a bit of a problem for freedom of the press more generally.”

Documents already published by Wikileaks have embarrassed Mrs Clinton, including emails that show she overrode Pentagon officials who advised her against US military intervention in the Libyan crisis in 2011.