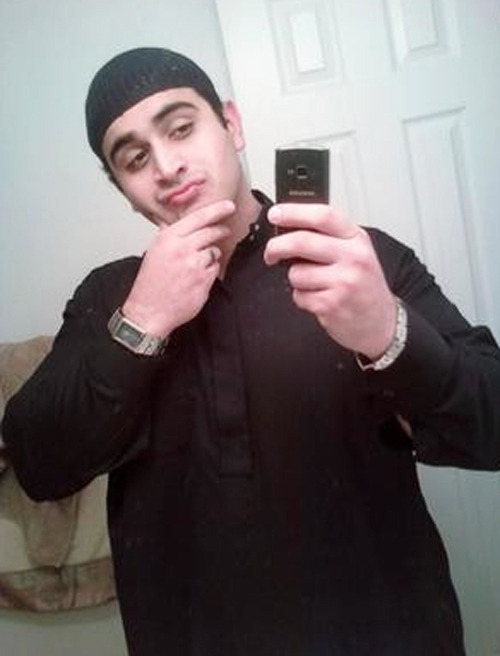 A picture has begun to emerge of the gunman in the latest US massacre who was quiet and had few friends and had been interviewed by US authorities in recent years for suspected sympathies with Muslim extremists.

Before fatally shooting 49 people and wounding 53 others at a gay nightclub in Orlando, Florida on Sunday, Omar Mateen, 29, who was killed by police, appeared to live a quiet life in Fort Pierce on Florida’s southeast coast, 195km from the nightclub where the massacre took place.

The ex-wife of the 29-year-old man suspected of killing 50 people in a Orlando nightclub on Sunday said that he was violent and mentally unstable and beat her repeatedly while they were married.

The ex-wife said she met Omar Mateen online about eight years ago and decided to move to Florida and marry him.

At first, the marriage was normal, he later he became abusive.

“He was not a stable person,” said the ex-wife, who spoke on the condition of anonymity because she feared for her safety in the wake of the mass shooting.

“He beat me. He would just come home and start beating me up because the laundry wasn’t finished or something like that.”

But, the imam of the Florida mosque that Mateen attended for nearly 10 years described him as a soft-spoken man who would visit regularly but rarely interact with the congregation.

“He hardly had any friends,” Syed Shafeeq Rahman, who heads the Islamic Centre of Fort Pierce, told Reuters.

“He would come with his little son at night to pray and after he would leave.”

Rahman said Mateen never approached him regarding any concerns about homosexuals.

Rahman said he himself had been increasingly speaking out against violence, noting that even inflicting a scratch on someone was against the tenets of Islam.

The tragedy had left the local Muslim community fearful, he said.

“We thought we could relax for a couple of years and tell people we are normal human beings,” Rahman said.

Rahman said he planned to add extra security to the mosque and brighter lighting to help reassure followers they were safe amid fears of a public backlash against Muslims.

Still, much remains unclear about the motivations of Mateen.

He was born in New York of Afghan descent. A classmate from his Florida high school described him as a typical teenager who played football for a Martin County team in Stuart, a small city about a 20-minute drive from Fort Pierce.

Samuel King said he often spoke with Mateen after he graduated high school.

King worked at Ruby Tuesday’s restaurant in the Treasure Coast Mall, where Mateen worked at GNC, the nutrition store, he said.

King, who is openly gay, said the Mateen he knew until 2009 did not appear to be anti-gay.

King described Mateen as gregarious and talkative in the immediate years after high school, but said “something must have changed” since he last saw him in 2009.

He said his son turned angry when he saw two men kissing in Miami a couple of months ago. Mateen’s ex-wife, who spoke to the Washington Post, said her former husband was violent and mentally ill and beat her repeatedly while they were married.

The FBI twice interviewed Mateen for having suspected ties to Islamist militants, a process likely to renew questions over whether the US government has a clear strategy or adequate resources to turn Americans away from radicalism.

The first investigation took place in 2013 when Mateen made inflammatory comments to co-workers that indicated sympathy for militants, FBI special agent in charge Ron Hopper told a news conference in Orlando.

Mateen had been employed as a security guard by G4S in Florida since September 2007, according to the British-owned multinational company, among the world’s largest private security firms. G4S provides security to federal buildings in Florida. It was unclear if Mateen had access to them.

In 2014, Hopper said, Mateen was investigated and interviewed again, this time for suspected connections to Moner Mohammad Abu-Salha, an American citizen who became a suicide bomber in Syria in 2014.

“Hopper said Mateen’s contact with Abu-Sallah was minimal and it was deemed that “he did not constitute a substantive threat at that time”.

One US counterterrorism official said there was “no evidence yet that this was directed or connected to ISIS. So far as we know at this time, his first direct contact was a pledge of bayat (loyalty) he made during the massacre,” said the official, referring to the call moments before the shooting.

Mateen also mentioned the Boston Marathon bombers during the call, which he made 20 minutes into the shootings, authorities said.

Mateen had a Florida firearms licence that expired in 2013 and a state permit to work as a security guard, according to public records.