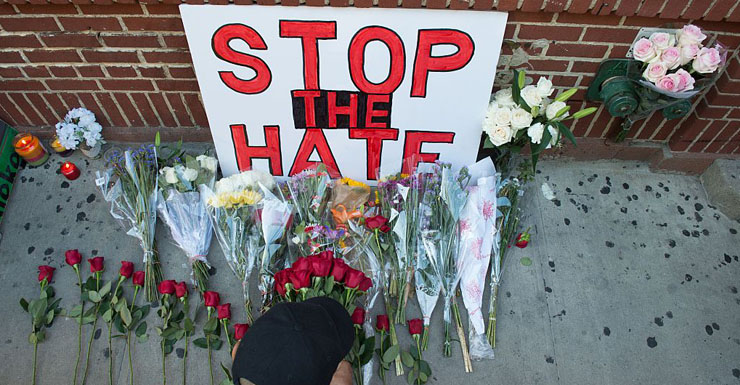 While America confronts the tragic possibility, again, that a mass shooting on its soil was conducted by an Islamic State operative, officials are yet to uncover evidence that gunman Omar Mateen was trained or instructed by the Middle Eastern terror group.

Mateen, who killed 49 people in a gay nightclub on Orlando, Florida, called 911 during the rampage to declare his allegiance to the group, which later claimed responsibility for the act.

It reportedly said the attack “was carried out by an Islamic State fighter”.

“One of the Caliphate’s soldiers in America carried out a security invasion where he was able to enter a crusader gathering at a nightclub for homosexuals …” the group said in an official broadcast on its Albayan Radio.

The FBI twice investigated Mateen – in 2013 and 2014 – after being alerted by his colleagues about inflammatory comments, alleging possible terrorist ties.

“We determined that contact was minimal and didn’t constitute a substantive relationship or threat at that time,” FBI spokesman Ron Hopper told a press conference in Orlando.

The FBI cautioned, however, that suspected links to radical Islamism required further investigation.

Three US officials familiar with the investigation into the massacre said that no evidence had yet been found showing a direct link with Islamic State or any other militant group.

There is “no evidence yet that this was directed or connected to IS. So far as we know at this time, his first direct contact was a pledge of bayat (loyalty) he made during the massacre”, said a US counter-terrorism official, referring to a 911 call the suspect made on Sunday. The official spoke on condition of anonymity.

A US intelligence official said it was not unexpected that IS would claim responsibility given that the group has been suffering serious losses of fighters and territory in Iraq and Syria.

“They are losing on their home turf, and it’s not surprising if they’re looking for some kind of twisted victory.”

The attack also sparked concern of a campaign against the gay and lesbian community as the first anniversary of the Supreme Court’s decision to legalise same-sex marriage approached.

Following the massacre, some in the gay community accused politicians and the media of obscuring the true nature of the Orlando shooting as a sexual hate crime – and railed against a ban on gay men donating blood to the victims.

June is LGBTI Pride Month in the US, and the scene of the deadly attack was founded in memory of a gay man who died of AIDS in 1991.

Much of the mainstream media coverage in the hours after the tragedy focussed on the death toll, the potential links to Islamic extremism and the perennial issue of gun laws, infuriating some in the gay community.

US President Barack Obama termed it an “act of terror” and an “act of hate”. Presidential hopeful Donald Trump blasted Mr Obama for “disgracefully refusing to say the words ‘Radical Islam'”. It took his Democratic rival Hillary Clinton several tweets to mention gay victims directly: “To the LGBT community: please know that you have millions of allies across our country. I am one of them.”

UK journalist Owen Jones made headlines across the world by storming off a live TV interview because fellow journalists refused to call the crime a “homophobic terrorist attack”.

“This person is a homophobic terrorist,” Mr Owens insisted. “At the end of the day, this was a homophobic hate crime as well as terrorism. It has to be called that.”

He grew frustrated when one of the Sky News interviewers interrupted to say the victims were “human beings” and that the attack was no worse than the Paris terror attacks.

“What I’m saying is, this has to be called out for what it is. It was an intentional attack on LGBT people,” Mr Jones said. “You don’t understand this because you’re not gay.”

Mr Turnbull described the attack on Monday as “an attack on the gay community” and “clearly directed by a murderous hatred of gay people”, but this did not seem to allay the anger of some. One Twitter user branded the PM a “coward”.

Many in the gay community were also outraged at being barred from giving blood to assist victims of the shooting.

Gay men in the US must wait one year after sexual contact with another man before being allowed to donate under a rule implemented by the Food and Drug Administration (FDA) in 2012. A similar rule exists in Australia.

The irony of asking for blood donations in response to mass murder of a community that isn’t permitted to donate blood.

Maybe it would be easier for gay men to donate blood if they poured it into bullets and then shot it into the recipient?

i am just so angry because people are being murdered, our community can’t donate blood, and this just keeps happening while the US stands by