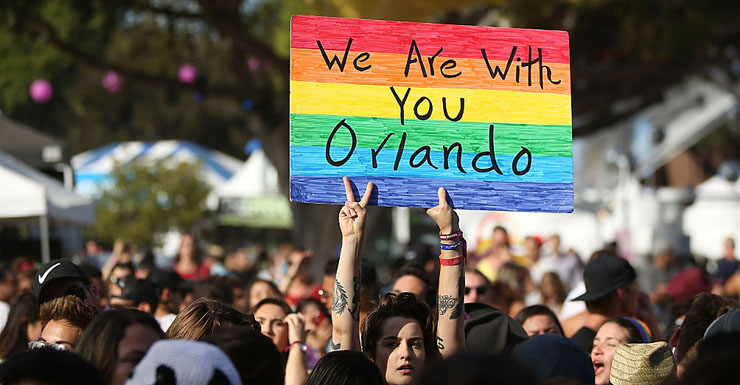 Orlando residents have declared they will not be divided by the hate that fuelled the murders of at least 49 innocent revellers in a gay bar.

Despite the hesitation of law enforcement officials to declare an official motive for Omar Mateen’s horrific attack on Pulse nightclub, the targeted nature of the killing spree has driven a hole through the hearts of the LGBT community.

Yet the overwhelming message from grieving residents and supporters all over the world has been one of love, and the ability to rebuild.

A number of vigils have already been held across Orlando and the US in tribute to the victims – many of whom remain in hospital – as the country comes to grips with its worst mass shooting of all time.

Hundreds of Australians also joined vigils in the wake of the killings, with the Sydney Harbour Bridge being lit up in rainbow colours in a show of solidarity that follows similar moves by iconic buildings around the world.

On Twitter, the hashtags #LoveWins, #LoveIsLove and #GaysBreakTheInternet have been used to convey a message of solidarity to the victims and the LGBT community at large.

The message #LoveWins first went viral in 2015 when gay marriage was legalised by the US Supreme Court, but has been resurrected in the wake of the attacks.

Local paper the Orlando Sentinel emblazoned its front page with the simple message: “Our community will heal”, while hundreds took part in peaceful vigils across the city.

Australian Prime Minister Malcolm Turnbull condemned the attack as “clearly directed by a murderous hatred of gay people”, while Opposition Leader Bill Shorten called it an “attack on the right to be proud of who you are and who you love”.

On Monday evening (AEST), officials confirmed the death of Eddie Justice, the young man whose desperate text messages to his mother from the inside the Pulse nightclub garnered global attention.

“Mommy I love you,” the first message said. “In club they shooting.”

Justice sent a number of messages to his mother saying Mateen had him and others cornered in the bathroom and he feared he was “gonna die”.

When Mina Justice still hadn’t heard her son’s fate 15 hours later, she told Associated Press, “I got a bad feeling”.

The City of Orlando website has been gradually updating a list of confirmed victims – most of them in their 20s and 30s.

Reflecting Pulse’s Latino-themed night on Saturday, a majority of the victims are of Latino descent.

Stanley Almodovar III (above left) was a 23-year-old pharmacy technician described by his aunt as “an amazing person with a good soul”.

His mother told the Orlando Sentinel she had expected to come home from the nightclub hungry and had left some tomato and cheese dip in the fridge for him.

Edward Sotomayor Jr (above right) was a 34-year-old brand manager for a gay travel agency known for wearing a top hat.

He died trying to shield his boyfriend from Mateen’s gunfire, according to news.com.au.

Luis Velma (above middle) was a 22-year-old production assistant at Universal Orlando theme park and had studied at Seminole State College of Florida.

#GaysBreakTheInternet // sending love to all the victims and their families. we’re all in this together. #LoveIsLove pic.twitter.com/3Ro9nk0OzU

There is a light that can overcome the darkness.

There is no darkness that can overcome the light#LoveIsLove pic.twitter.com/sMMKj2RbdA

Our hearts are with everyone in #Orlando today. #LoveIsLove

The Hip Hop community is the least outspoken about gay rights and Ima go out my way to change that.