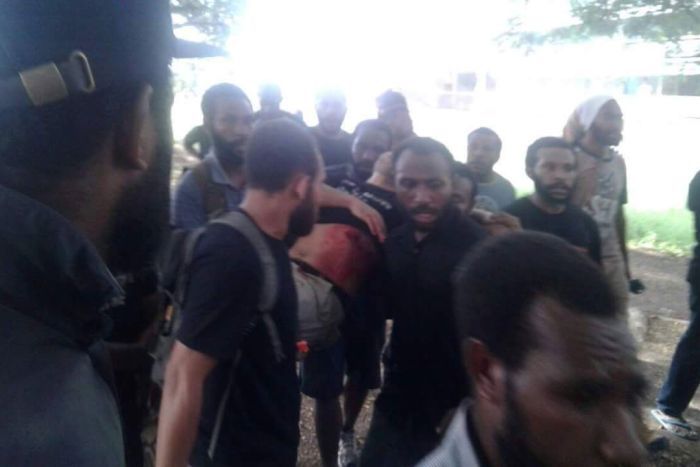 Foreign Minister Julie Bishop says the Australian government has been unable to confirm any deaths resulting from a violent clash between Papua New Guinea troops and protesting university students Wednesday.

Ms Bishop said Thursday the situation in the PNG capital and some other towns remains volatile after police in Port Moresby opened fire on university students protesting against the PNG government.

PNG Prime Minister Peter O’Neill has refuted early reports that four people were killed in the clash after a crowd of students tried to march to the national Parliament to continue a long-running protest against the alleged corruption of the government.

Prime Minister Malcolm Turnbull has offered his Mr O’Neill help to prevent further unrest, but it has yet to be accepted.

“We can provide support, but of course it has to be requested by PNG,” Ms Bishop said.

Australian Federal Police officers on the ground are determining what impact the protests could have across the country.

Ms Bishop urged calm from both sides in PNG and for proportionate police action to be taken.

“Obviously lawful and peaceful protests should be allowed,” she told ABC radio Thursday.

A PNG court has since granted an injunction barring university students from protesting on campus.

The injunction had been sought by the university.

Late Wednesday, Mr O’Neill blamed agitators and criminal elements for the violent confrontation that resulted in several injuries, saying a small group of students threw rocks at police, who responded with tear gas and warning shots.

An opposition member reportedly told the country’s Parliament earlier in the day that four people were killed but Mr O’Neill and his police minister Robert Atiyafa have denied any student deaths.

Five students were treated at Port Moresby General Hospital after the confrontation but all were in a stable condition.

The incident is the culmination of a five-week student boycott of the PNG university by students urging the PM to face allegations brought by various anti-corruption bodies.

The trouble erupted on Wednesday when police prevented 1000 student protesters from boarding a bus at 7:00am.

When the students instead attempted to march towards Parliament on foot, police reportedly began shooting directly into the crowd and punching and kicking the protesters.

Port Moresby General Hospital said 10 students had been admitted, before clashes erupted between police and members of the public outside.

“Now there is a very big clash with the public and with the police just outside the Port Moresby General Hospital,” a hospital official told Reuters, adding: “There is also shooting going on, open gunfire.”

One student at UPNG, Stacey Yalo, said people on campus were hiding from police.

“The situation is really tense and everyone is so confused right now,” she said.

“It is coming to a point where they are actually targeting students as if they’re criminals. They’re shooting at them. They’re out here to shoot and kill.”

Student leader Christopher Kipalan, the chairman of the UPNG Forum, said police were chasing and shooting at protesting students in the suburbs of Port Moresby.

“Police are trying to shoot the civilians plus the students,” he said.

“So many casualties. I cannot confirm [how many] because I am on the run, can you understand that? I am seeing civil unrest.”

Another student, Gerald Peni, said police “fired shots directly at the crowd … and many of the students fell, they got injured”.

There were also reports of looting and damage across the city, with one post on Twitter reportedly showing a university campus building on fire.

The government’s Smart Traveller website advised a high degree of caution for Australian travellers in PNG.

The Australian Department of Foreign Affairs has updated travel advice for PNG to take in the latest unrest, urging Australians to be very careful in all parts of Port Moresby where there were also reports of looting and unrest.

more news from fb >>>> A dormitory on fire at UPNG, Port Moresby soon after UPNG students get shot by police.. #PNG pic.twitter.com/DCmbq8eW8e