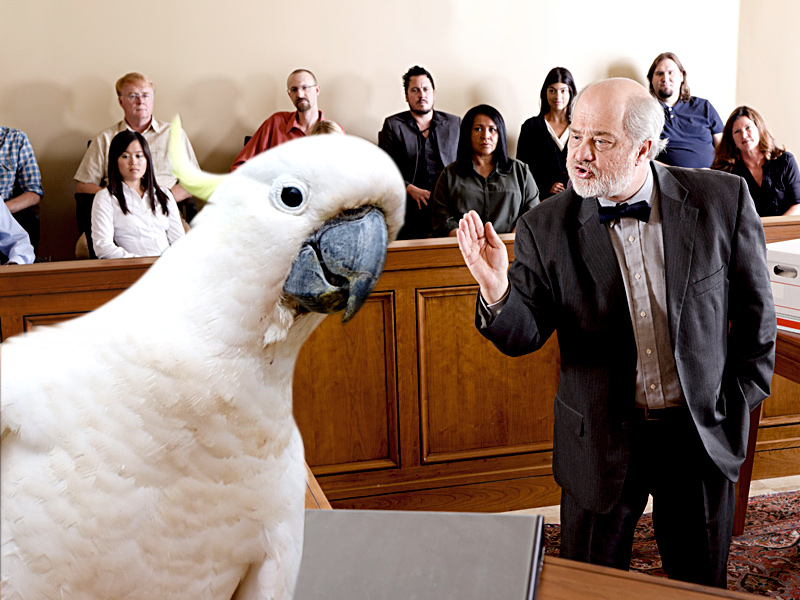 Parents of a US murder victim believe his pet parrot holds the key to the grisly murder.

Michigan man Martin Duram died of a gunshot wound to the head in 2015 inflicted by a weapon he owned. His wife Glenna was also shot in the head, but survived.

In a kooky twist to the morose case, Martin’s parents believe their son’s pet parrot Bud may prove the only credible witness in the murder trial.

According to them, Bud has been repeating the phrase “Don’t f***ing shoot” since the murder – and they allege he is mimicking the last words of his owner as wife Glenna held the gun.

“That bird picks up everything and anything and it’s got the filthiest mouth around,” Lillian told WOOD TV.

The Durams provided the news station with a video depicting Bud in one of his mimicking moods, in which you can hear the parrot alternating between a man and a woman’s voice who sound like they are arguing.

The bird then screams “Don’t f***ing shoot” in a man’s voice.

Documents obtained by WOOD TV revealed wife Glenna is now a suspect based on new information about her extensive gambling debts, plus three suicide notes found written in her handwriting around the house.

But it’s yet to be seen whether Bud’s evidence will ever make it to court.

Watch the video of Bud below:

Newaygo County Prosecutor Robert Springstead told the Associated Press he hadn’t been able to view the footage yet, but that a decision would be made as soon as he received all the details of the investigation

Springstead said he “highly doubted” there was precedent for a parrot to be used as a witness.

If Bud was allowed into the witness box, he actually wouldn’t be the first animal to sway a murder case.

In 2008, a French dog was asked to appear in court after its owner was found hanged in his Parisian flat.

Police believed it was a suicide, but the man’s family insisted it must have been a murder, so controversial French judge Thomas Cassuto allowed the mutt (nicknamed ‘Scooby’ after crime-solving pup Scooby-Doo) to give evidence.

Scooby was introduced to a murder suspect to see how he would react.

The judge apparently praised the animal for his “exemplary behaviour and invaluable assistance”.

In 2014, another French labrador Tango was introduced to a suspect who was asked to hold a baseball bat.

The court then performed the same experiment with another dog of the same age and breed.

The US is not unfamiliar with the subject either, with a German Shepherd being subpoenaed by a defendant in 2012 for a drugs case.

The dog was led into the courtroom, but the judge didn’t allow the defendant to put the shepherd in the stand. He subsequently lost the case.

How a pet parrot could hold the key to murder case