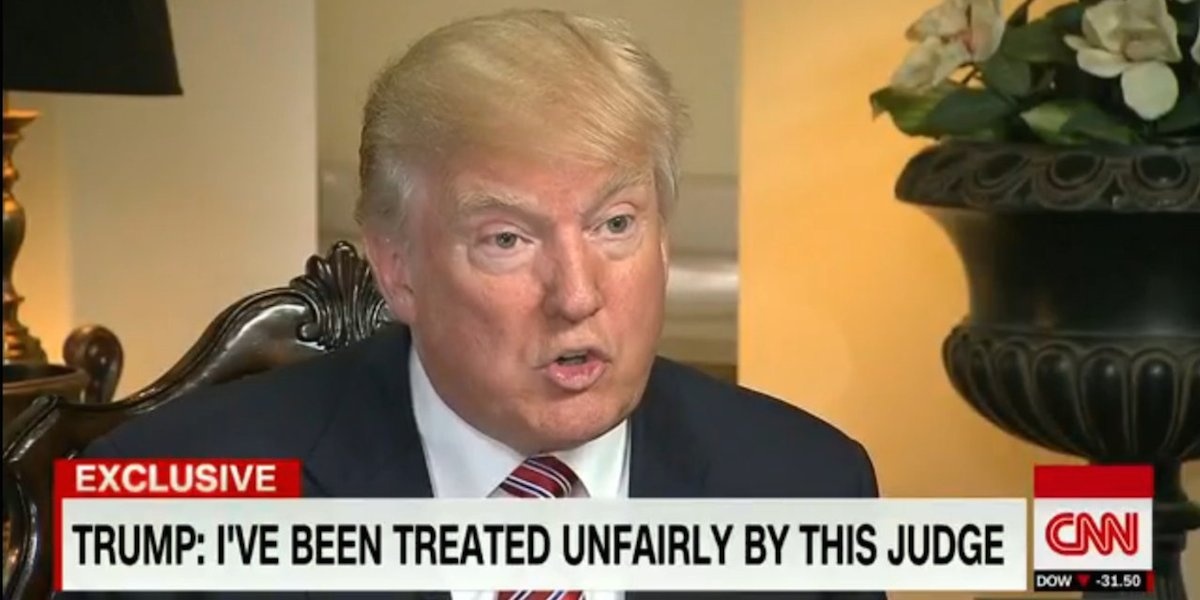 Getting straight answers out of presidential candidate Donald Trump is no easy feat.

Seasoned CNN anchor Jake Tapper learned this the hard way on Saturday when he attempted to question the Republican about his potentially racist criticisms of a federal judge.

In an interview with the Wall Street Journal last week, Trump claimed the judge overseeing a lawsuit against Trump University had a “conflict of interest” with the case because of his Mexican heritage.

The 69-year-old said Judge Gonzalo Curiel’s background and membership of the Latino lawyers’ association meant he was a “Trump hater” given Trump’s plans to “build a wall” between the United States and Mexico, Trump claimed.

Curiel is presiding over civil fraud lawsuits against the University, in which the plaintiffs allege the University fooled them into paying tens of thousands of dollars on the basis they would be taught Trump’s own real estate strategies.

“Let me ask you about comments you made about the judge in the Trump University case,” Tapper said on his program The Lead.

“You said that you thought it was a conflict of interest that he was the judge because he is of Mexican heritage, even though he is from Indiana. Hillary Clinton said that that is a racist attack on a federal judge.”

Trump responded by highlighting Curiel’s refusal to dismiss the case despite Trump’s requests.

“What does that have to do with his heritage?” Tapper asked.

The GOP candidate then proceeded to avoid the question 23 times, instead choosing to focus on his plan to renegotiate trade with Mexico, his “unfair treatment” at the hands of Curiel and Curiel’s “pride” in his heritage.

“I will tell you … I have been treated very unfairly. Beforehand we had another judge. If that judge was still there this case would have been over two years ago.

“This judge is of Mexican heritage, I’m building a wall.”

A confused Tapper shot back: “So a Mexican judge could ever be involved in a case that involves you?”

“Well, he’s a member of a society that’s very pro-Mexico and that’s fine … I think he should recuse himself,” Trump responded. “I’m building a wall, I’m trying to keep business out of Mexico.”

“But he’s an American,” Tapper said of Curiel, who was born in the state of Indiana.

“He’s of Mexican heritage and he’s very proud of it,” Trump said, before adding that many people said his university was “fantastic”.

After nearly five minutes of deflection, Tapper finally got a straight answer out of Trump.

“If you are saying he cannot do his job because of his race, is that not the definition of racism?” he asked.

“No, I don’t think so at all,” Trump responded. “We’re building a wall, he’s a Mexican. The answer is, he is giving us very unfair rulings, rulings that people can’t even believe.”

The controversial candidate also used the interview as an opportunity to talk about his own election campaign, especially in relation to Hispanic voters.

Watch the awkward interview below.