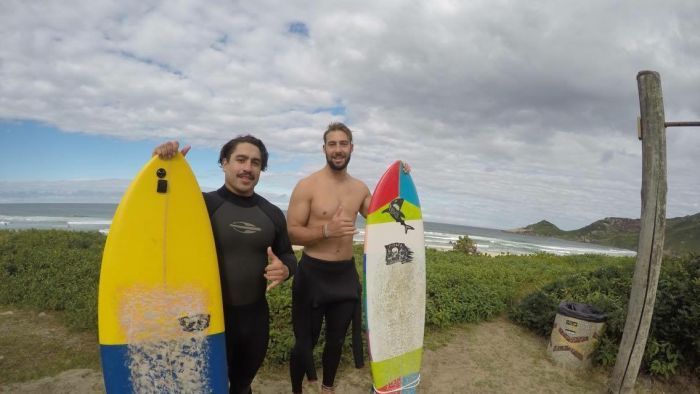 A local fisherman says a man he believed to be missing Australian Rye Hunt was scratched and parched when he saw him on a Rio island earlier this week, Brazilian authorities say.

But when they went to investigate the sighting, there was no sign of the 25-year-old Tasmanian who’d disappeared nine days earlier.

Mr Hunt had, police say, taken drugs at a party and suffered a psychotic episode before he went missing on May 21.

Media reports on Thursday suggested Mr Hunt may have been found but police later clarified that wasn’t the case.

After the initial reports, Mr Hunt’s family said they were “hopeful but understandably cautious.”

Rio’s missing persons unit received a phone call on Monday from a fisherman who reported seeing Mr Hunt on Cotunduba Island, around one kilometre off the Rio neighbourhood of Leme.

Mr Hunt was said to be very scratched and asked for water.

When the fisherman asked how he’d reached the island, the man said he’d swum.

Authorities searched the island on Monday and Tuesday “but nothing was found”, a police statement sent to AAP said.

“Police are still trying to look for the Australian citizen.”

Mr Hunt’s uncle and girlfriend arrived in Rio overnight to help search for the missing man.

Speaking for the Brazilian police, Elen Souto has told reporters in Rio that on May 21 Mr Hunt and his friend used MDMA, or ecstasy, before going to a party in Lapa where they again took the drug.

The Australians went into a psychotic state and party security took the mates back to their hostel in the morning, Ms Souto said on Wednesday.

Mr Sheppard apparently then suggested the pair leave Brazil – a month ahead of schedule – and travel to Bolivia.

Mr Hunt agreed and they took a taxi to Rio airport but argued in a coffee shop.

Ms Souto said police believe Mr Hunt accused his 22-year-old friend of stealing his passport and trying to kill him.

Mr Hunt then caught a taxi, alone, at 2.30pm to Copacabana before booking into an apartment. He paid in advance for three nights.

The Tasmanian bought some beer, CCTV footage shows, before leaving his room around 6pm.

Mr Hunt hasn’t been seen since – apart from Monday’s possible sighting on the island.

Australia’s foreign affairs department says its embassy in Brazil is working closely with authorities “as their search and investigation operation continues”.

“We remain hopeful Mr Hunt will be found safe and well, but continue to hold concerns for his safety,” the department said.

Mr Hunt’s family says if he took drugs in Rio it would have been out of character.

“Rye works in the mining industry which requires regular tests for illegal substance used by employees and contractors … a test Rye has never failed,” relatives said in a statement.

“His family will require significant evidence to verify these claims”.