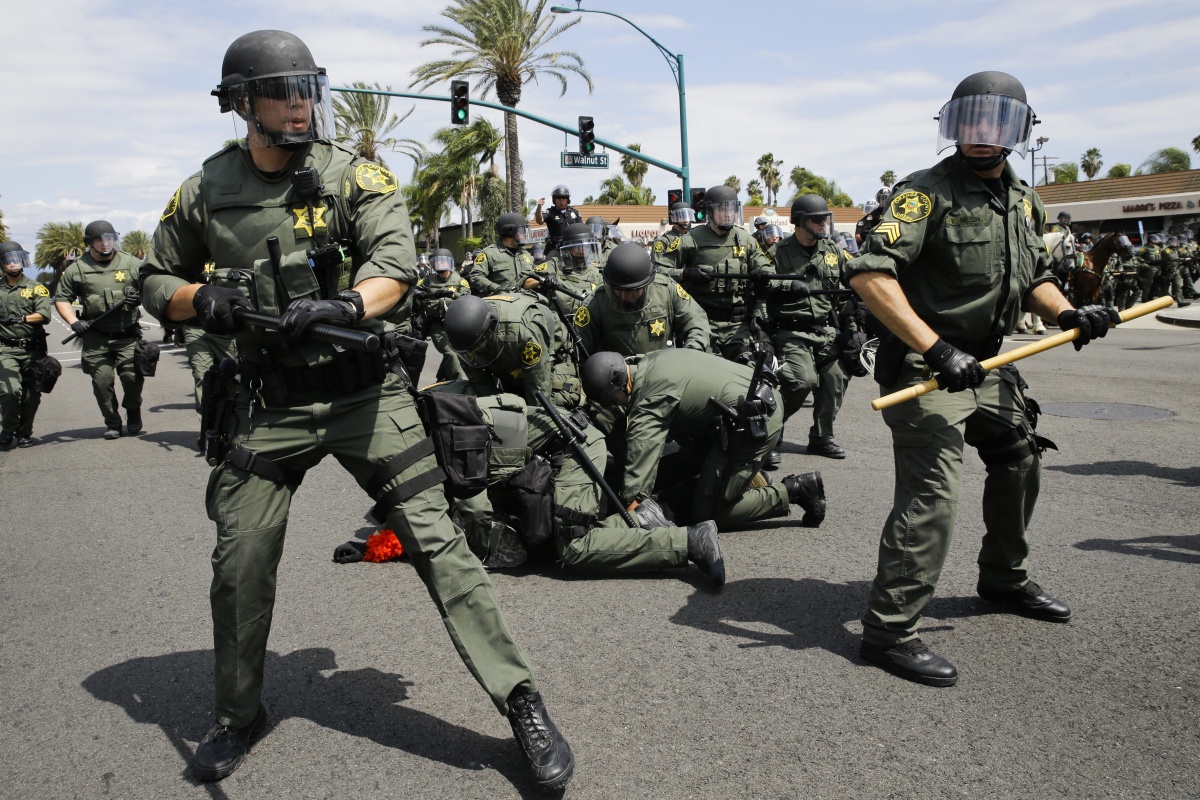 Protesters at a rally in Southern California held by Donald Trump carried signs saying “Stop Nazi Trump” and “Make America Hate Again”, as a large police presence stood by a day after a Trump event in New Mexico erupted into chaos.

Police outnumbered the 100 demonstrators outside the convention centre where Trump was speaking on Wednesday.

Many were unhappy about Trump’s views on Hispanic immigrants and ripped apart a pinata resembling Trump and placed the papier mache head on top of a flag pole with a large Mexican flag.

Police had warned they would take “swift” action if protests at the event in Anaheim escalated. About 100 police officers stood watch behind metal barricades and another 50 sheriff’s deputies lined up along the convention centre.

It was not until long after the rally that police were finally called in to disperse the protesters. A police helicopter circled overhead telling people to disperse or risk arrest.

Inside, Trump was disrupted by protesters as he spoke, including one who waved a Mexican flag.

“Do not hurt him,” Trump said as a man was led out of the arena. “I say that for the television cameras. Even though he is a bad person.”

Trump’s appearances in the US West in areas with significant Hispanic populations have drawn large protests – such as Tuesday night’s violence in Albuquerque, where rock-throwing demonstrators were arrested.

Trump’s remarks that Mexico is sending criminals and rapists to the US, made when he launched his campaign last year, have been a lightning rod for protesters.

A poll by the political research group Latino Decisions found 87 per cent of registered Hispanic voters view Trump unfavourably. States like Nevada and New Mexico have growing Hispanic populations that could tip the election.

Trump’s trip west came ahead of the California and New Mexico nominating contests on June 7.

Trump also planned to hold several large fundraising events while in California. It is the first high-dollar fundraising event the New York real estate mogul has held after largely self-funding his primary campaign.

Mike McGetrick, one of two people carrying “Latinos for Trump” signs at the Anaheim rally, said he is part of a group called America First Latinos, whose website describes its members as believing in “the rule of law, hard work and the American Dream”.

He said his neighbourhood in nearby Orange is “being overrun” by undocumented immigrants.

“There are so many of them, and they’re everywhere,” said McGetrick, 62, a retired city worker. “I can tell an illegal from a regular person just like that.”

Supporters of the presumptive Republican nominee have been hopeful that his likely opponent, Democrat Hillary Clinton, will be dogged by her own problems to offset his difficulty with some populations.

On Wednesday, Clinton faced renewed criticism about her use of a private email server while secretary of state after a report by the State Department’s inspector general said she had violated agency policies.

Trump only briefly addressed the report in his appearance in Anaheim.

“Not good,” he said. “Inspector general’s report, not good.”

In a Twitter post on Wednesday, Trump called the protesters in Albuquerque “thugs who were flying the Mexican flag.

“The rally inside was big and beautiful, but outside, criminals!” he said.

Cops get heavy with protestors at Trump rally