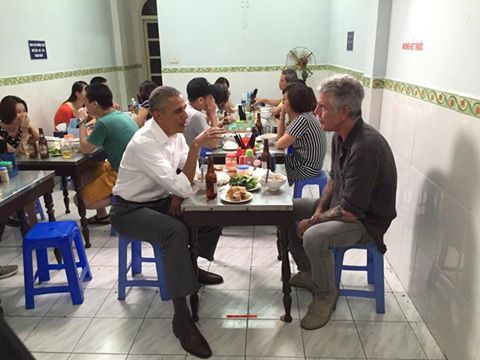 US President Barack Obama is touring Asia this week in an effort to “increase US diplomatic, economic, and security engagement with the countries and peoples of the region”, according to the White House.

• Senator Hanson – get used to hearing it people
• Donations an issue for all parties
• Credlin: ‘Turnbull likes to be liked’

And what better way to increase engagement than to engage with the local cuisine?

The president’s schedule in Vietnam has included fully lifting its decades-old ban on weapons sales to Vietnam, making historic speeches — and having a meal with celebrity chef Anthony Bourdain.

Total cost of bun Cha dinner with the President: $6.00 . I picked up the check . #Hanoi

“Bourdain will explore the purpose of the President’s trip and his interest in the people, food and culture of Vietnam” for an upcoming episode of his show Anthony Bourdain: Parts Unknown, a CNN spokesperson said.

And while dining with the president might be a costly affair, this particular meal cost a breezy $US6.

“I picked up the check,” Mr Bourdain tweeted.

The US administration hopes to bolster better ties with the one-party, communist country as China’s influence in the area spreads.

During his tour of Asia, Mr Obama will also travel to Ho Chi Minh City, participate in the G-7 summit and end the week by visiting the Hiroshima memorial site.